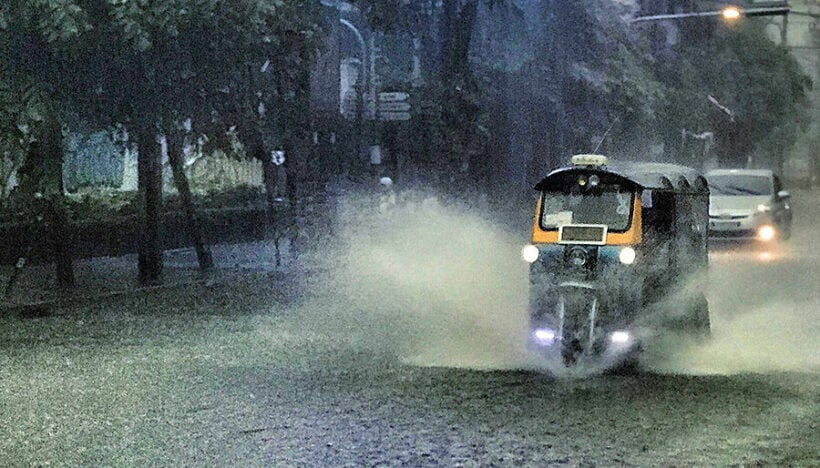 Thailand has just three seasons… damn hot, not-quite-so-hot and wet (sometimes torrential). The wet time of the year is variously called the wet season, the green season or monsoon. Whilst some people view the rain, sometimes very heavy, as a disruption, other embrace the annual downpours and enjoy the break from the hot weather. Depends if you’re riding on a motorcycle without a raincoat when it starts!

Unlike much of the rest of the world, north and south of the equatorial regions with four reliable seasons of winter, spring, summer and autumn, Thailand has just three types of weather driven by an annual monsoon that sweeps north east out of the Indian Ocean into the South East Asian land mass. Apart from pressure systems that sweep down from China, the tropical monsoon is the overwhelming feature of Thailand’s weather.

We should also note that in far north Thailand there is also a notable, but short, cold season where morning temperatures can hover as low as 10 degrees celsius, and even have frosts in mountain areas.

Thailand’s wet season is caused by the southwest monsoon sweeping out of the Indian Ocean with moist air heading in a north-easterly direction across Thailand from the Andaman Sea and sucked into the void left by rising warm air over the south east Asian landmass. The monsoon also coincides with Thailand’s location in the south east Asian tropical rain belt, the Inter Tropical Convergence Zone.

The timing of the Thai wet season isn’t the same around the country and isn’t exactly the every year although it is reliably consistent. Chiang Mai does not have the same rainy season as the Gulf of Thailand islands. Koh Samui’s wet season is month’s after the islands on the other side of the Malay Peninsula (the Isthmus of Kra). Phuket’s wettest months are September and October. Koh Samui has its biggest rainfalls and storms 2 months later.

The annual celebration of Songkran, the Thai New Year on April 13, is usually timed to match both the end of the hot season and the start of the annual wet season. The festival centre’s around ‘water’, traditionally the gentle washing of Buddha images and the hands of the elderly. It’s become somewhat of an all-in water fight since then in the tourist zones but the symbolism of water remains the focus. In most provinces the start of the monsoon is usually a month or so later after Songkran.

Some places can be much wetter than others. Ranong, in the south of Thailand, just north of Phuket facing the Andaman Sea, is the wettest province in the country with a rainy season stretching from April to November. But the seaside resort of Hua Hin on the Gulf of Thailand only really has two particularly rainy months, September and October.

The strength and intensity of the rains vary greatly. But, generally, monsoon rains tend to be short, intense bursts of rainfall. They could last for a few hours in the middle of the day, but they could just as easily be over within about 15 minutes in the morning or evening. But the torrential rain is always matched with warm temperatures so it can be more of a relief than a hassle. 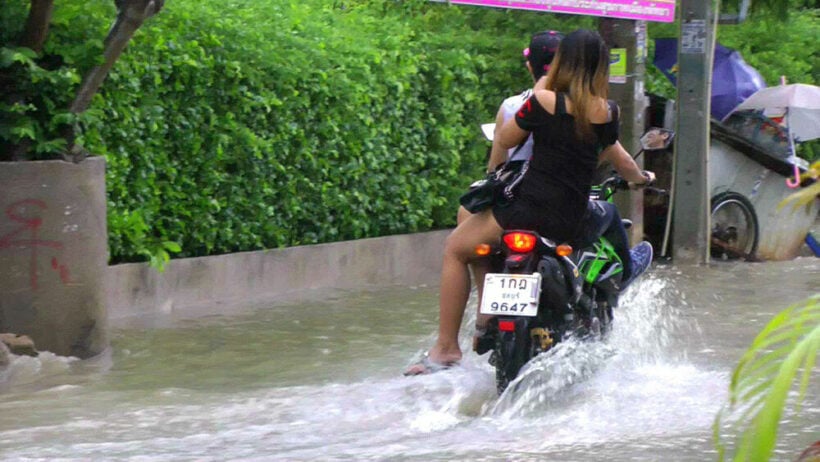 Then again there are always the people that need to get from here to there during a rainstorm and there are thousands of photos of people negotiating a Thai rainstorm, knee-deep in the monsoonal rain. The monsoons do little to stop the locals who are used to just plugging-on, despite the deluges and occasional floods.

Help is never too far away with the ubiquitous 20 baht ‘poncho’ available at every 7 Eleven or Family Mart. Flimsy and available in a variety of unfashionable colours, they’ll keep at least some of your body dry if you’re caught out in a downpour. If you happen to be in Thailand during the wet season we’d recommend keeping one of these in your bag as the rain can start anywhere, anytime, but will always clear up quickly.

It floods very easily in Thailand, such is the intensity and suddenness of the monsoonal rains. Bangkokians will just roll up their trousers, or hold onto their skirts, take their shoes off and wade through the floodwater – it’s just part of life when living in Thailand. Every year millions of baht are spent to improve drainage and prevent flooding, just about everywhere, but nothing seems to make the situation any better.

The best thing about Thailand’s wet season is that the rains are never icy cold and usually provide a pleasant respite from the heat. There’s also a poetic drama and beauty of the Thai monsoons as we enjoy and celebrate the annual rains that provide water for the crops and fill up the dams. 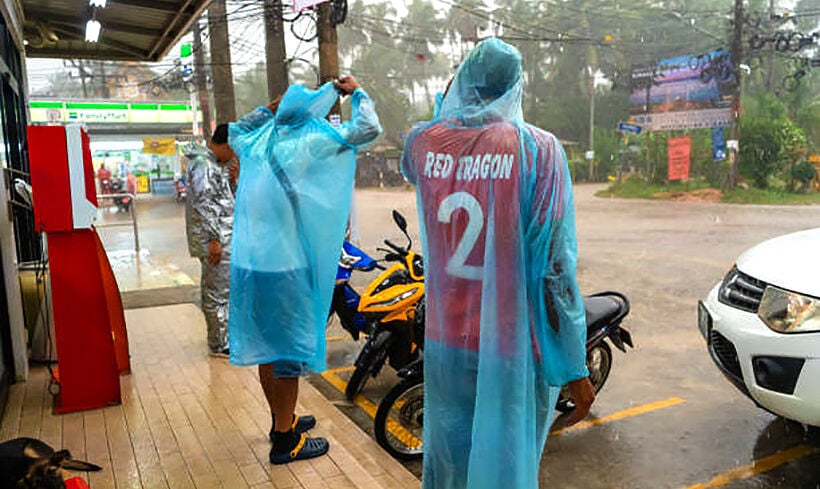 The rains could start as out-of-nowhere storms with some notable overnight dumps, before increasing to more regular almost daily rains in July and August. It won’t necessarily rain every day and very rarely all day. But sometimes it’s torrential. Bangkok, whilst built to cope with the heavy rains has closed off a lot of the canals and the natural means of escape has been blocked off over the years.

Bangkok is also sinking, slowly, so there are frequent inundations in some lower-lying coastal communities when a high tide and a torrential downpour coincide.

Chiang Mai is the north capital, mostly flat in the city and surrounded by hills, and attracts plenty of tourists and travellers year-round, regardless of weather. Chiang Mai is also the jump off point for visits to Pai, Mae Hong Son, Lampang and Chiang Rai.

The monsoon season lasts longer in the North, compared to Bangkok. It usually starts around May and continues until November. July and August are particularly wet.

Whilst tourism plunges on, regardless of the rains, there will be occasional disruptions to some of the outdoor activities during the peaks of the northern wet season. The northern parts of Thailand do have distinctly cooler weather during the dry season – December until the end of February – even a morning frost in the mountains around the region. 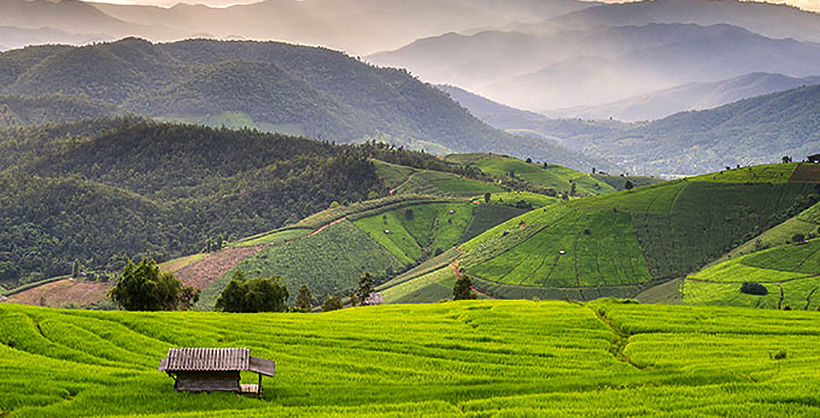 The Northeast provinces (known as Isaan) are further away from the Indian Ocean so the monsoon has lost some of its power by the time it reaches this region. The wet season would stretch from May to October but 80% of the rain usually falls in August and September.

The region’s north and eastern borders are the mighty Mekong River which relies on a decent annual fall of rains. In recent years the Mekong has recorded lower levels due to the changes in wet season rains and damming upstream in Laos and China.

Koh Chang and the other islands off the coast of Trat province are beautiful and mostly unspoiled by mass tourism but can be very wet during the monsoon which usually runs from late May to the end of October. In June, July and August it’s likely to rain at some stage just about every day.

The moist air has been sucked in from the Indian Ocean, crossed over the thin peninsula of southern Thailand and then rebuilt strength as it passes over the Gulf of Thailand.

Storms and choppy offshore waters means that diving and snorkelling may be limited. But the islands will be much quieter and prices lower during the wet season.

Phuket, Krabi and the Andaman Coast

Glorious beaches, tropical living and beautiful islands. Once upon a time this region had a distinct high and low tourist season but the changes in international tourist mixes have made many of the Andaman Sea destinations busy throughout the year, rain or no rain. Phuket, Krabi, Koh Lanta, Khao Lak, Koh Phi Phi are just a few of the popular destinations in this picture-postcard region.

It will usually start raining from mid April to October and November. September and October are the wettest. And when it rains, it pours. The strong south westerly winds usually make the west-facing beaches unswimmable for the duration of the monsoon – many tourists drown off these coastlines each year so take the red flags and warnings from the lifeguards seriously.

Some of the smaller islands and diving spots shut down during the monsoon season.

Koh Samui and the Gulf Islands

Koh Samui, Koh Phangan and Koh Tao in the Gulf of Thailand are a triad of popular islands off the coast of Surat Thani and have their own annual season weather patterns.

The monsoon season doesn’t hit Koh Samui until later in the year, with the rains arriving during October to December with peaks in November and trailing off during the start of the new year. But, like the Andaman Coast destinations, it remains hot and mostly humid throughout the year. 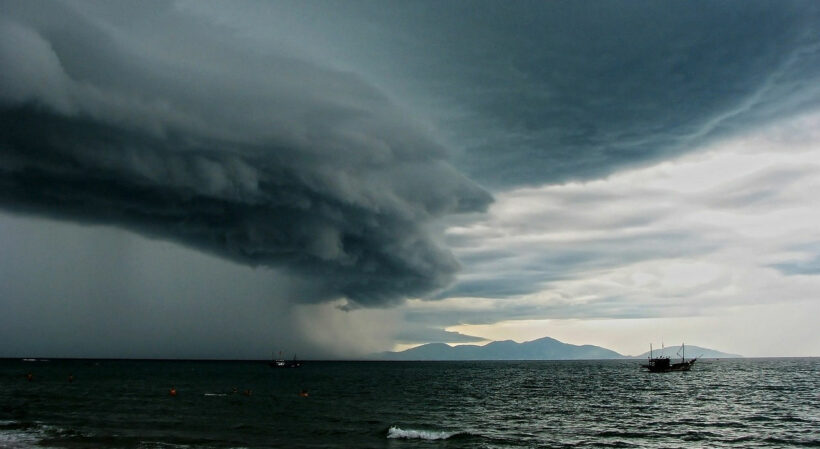 And it does get humid. Here’s what you can do to cope with Thailand’s humidity.

Ramanathan.P
Thanks for the detail weather pattern write-up Tim. This helps me to tweak my riding plan to Thailand...may be in Junen2022, if they scrap all the conditions.......waiting for the travel since 16th March 2020, the last day I left Kanchanaburi.......
TWS60
Agreed, nice article. 👍

Thailand News Update | Thailand ready for an Influx of tourists