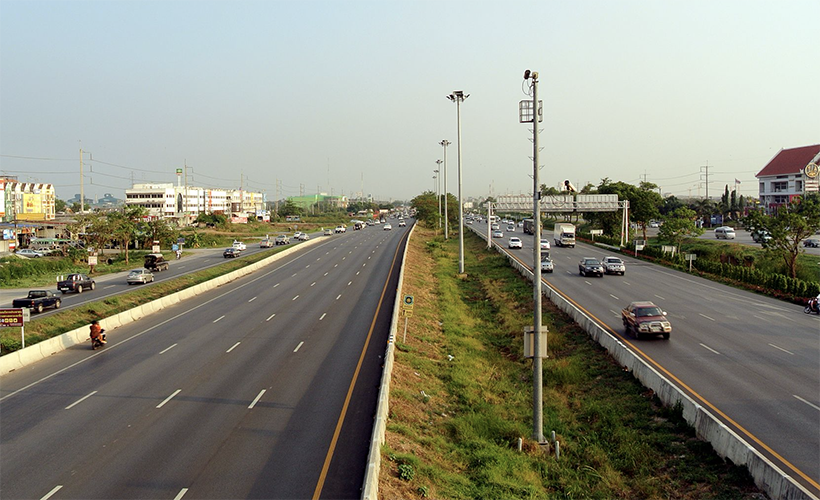 From yesterday, the speed limit for all traffic will now increase to 120 kilometres per hour. The change covers at least four highways in Thailand as a pilot program. The announcement was made by the director-general of the Highways Department and is already published in the Royal Gazette.

There’s been a few false starts on the raising of the national speed limit in the past, partly due to the government focussing on the Covid pandemic in the country. Last year the official upper limit was changed 120 kph but wasn’t for all types of vehicles.

It is envisaged that the new maximum speed will eventually roll out across all motorways across the country. All the arteries listed are 4-lane highways or motorways.

• Highway No 4 (Phet Kasem) from Khao Wang to Sra Phra.

The new upper speed limit doesn’t cover all sections of the main arteries and new speed limit signs are being located along the routes to alert drivers where the new stretches of 120 kilometre per hour limits are in place.

Drivers who violate Thai speed limits may be liable to a punishment. Currently offenders can be fined up to 1,000 baht for their first speeding offence. But mostly drivers are fined 500 baht for an on-the-spot fine. Of course all drivers must carry a valid Thai driving license or an equivalent International Driving Permit.

The new official speed limits won’t change very much as the older speed limits of 90 and 100 kilometres per hour were mostly exceeded by the majority of drivers anyway.

And for the full designation of the speed limit locations on these four motorways, Thai PBS World has published a detailed description…

If you don’t have, or need, a Thai driving license, click HERE.

Khunwilko
8 hours ago, Skip said: Highway 11 for one only part is an expressway, at least most of it is National Highway.. it has to be limited access.

palooka
On 5/12/2022 at 4:57 PM, Transam said: Depends on what you call an expressway, but CM does have a few roads built to smooth things out... Very pretty

palooka
Everyone I've spoken to about speed limits just says "how fast does your car go and do you have 500 baht?"