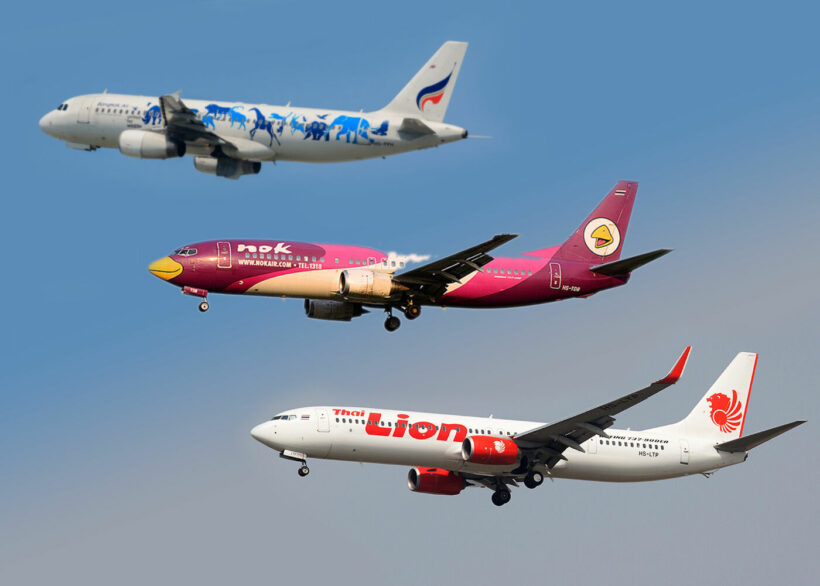 With lockdowns, sealed provinces, travel restrictions and ever-changing updates due to the continuously growing Covid-19 infections around the country, struggling airlines are scrambling to keep up. AirAsia was the first earlier this month to cancel all domestic flights, and other local airlines quickly followed suit. Yesterday Bangkok Airways cut nearly all of their domestic flights, extending their flight suspension until August 11. Now other airlines who cancelled flights until the end of July are announcing their updated plans as August begins.

Bangkok Airways had said they would still operate their flights that are connected to the Phuket Sandbox and Samui Plus reopening programs but were unsure about flights between Phuket and Samui. Today they announced the cancellation of that route, going into effect on August 3 to coincide with the province sealing its border to domestic travellers. The airline did announce again today that the Singapore to Koh Samui flight will still resume operation now, despite the Covid-19 outbreaks over the last several days.

The Phuket to Samui flights were the largest feeder of tourists into the Samui Plus scheme which was launched on July 15, after Phuket Sandboxers headed to the Gulf island after doing their first 14 days on Phuket. The cancellation of the flights will be a major blow to Samui’s tourist re-opening.

Nok Air has extended its flight cancellations until the end of August. At the same time, they have arranged flights between Pattaya’s U-Tapao airport and Phuket leading up to the sealing of Phuket. They added extra flights to total 3 flights for the next 3 days and will update their flight schedules following government restrictions during Phuket’s sealing period. The cancelled flights offer options to refund or reschedule flights or to reroute the flight the U-Tapao flights, or retain a flight credit until March of next year.

Thai Lion extended their flight cancellations until August 15, announcing flexible options for ticketed passengers whose flights have been cancelled. They are offering 1 free flight change or to extend the ticket value to the end of the year so passengers could maintain a credit for travel up until December 31.

With the changing rules and restrictions coming from the government, expect more updates in the coming days, weeks, and months.

pascal
a lot of staff going to loose their job i foreseen. it s vicious circle, if you let the virus running around the economy will go down at some stage, peoples will get sick and the business will not run. with…

AussieBob
10 minutes ago, pascal said: a lot of staff going to loose their job i foreseen. it s vicious circle, if you let the virus running around the economy will go down at some stage, peoples will get sick and the…

shanghailoz
I literally have had 3 separate airlines cancel flights on me now, credit on all 3.  Airlines should be giving refunds.   At least its not huge money, but it is starting to add up.   At least the Thai's…
Dialemco
It would be interesting to establish exactly how many arrivals into Phuket and Samui were genuine tourists but it seems with all the restrictions especially the Samui plus that rather than attracting tourism the reverse maybe happening. Both plans rely on…