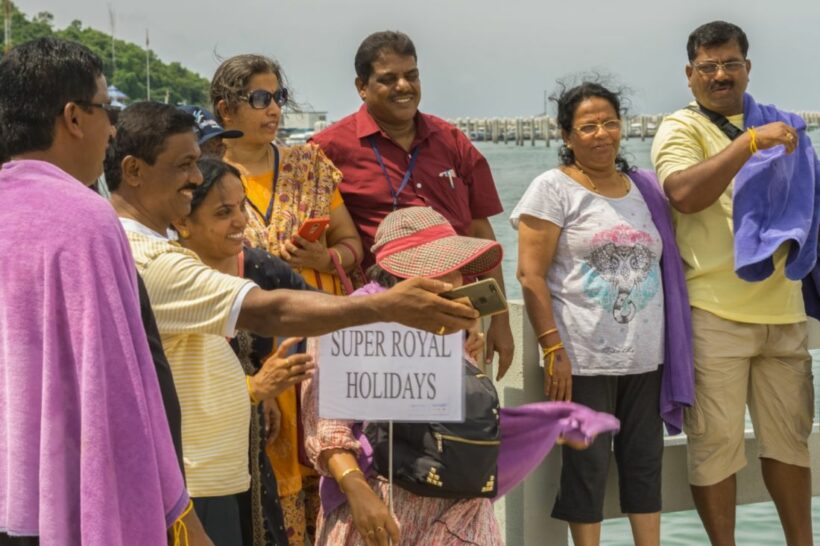 Take a walk around the markets of Pratunam in downtown Bangkok and you’ll soon discover there’s a new type of tourist in town. For years, Thailand’s tourism scene was dominated by Chinese visitors, with 10.5 million in 2018 alone, accounting for about 28% of total foreign arrivals. It still is.

But after the tour boat Phoenix, carrying mostly Chinese tourists, sank off the southern coast of Phuket in July last year, killing 47, the number of visitors from China, which had been increasing every year, began to decline.

In their wake, the number of tourists from India is now starting to increase, with a record 180,000 visiting in June alone, according to the Thai tourism ministry. More direct flights, a visa-fee waiver and, most importantly, increasing middle class wealth, is spurring on the number of Indian arrivals. The Tourism Authority of Thailand says those arrivals are up more than 20% for the first five months of 2019, compared to last year.

Arrivals from China, meanwhile, were 4% down over the same period, still equating to 4.8 million tourists, whereas just 787,195 came from India.

The rapid expansion of India’s middle class is prompting Thai tourism officials to raise their estimates of how many visitors will come from India, with its population of 1.3 billion. At least 10 million are now expected to arrive by 2028, a more than five-fold increase. That sort of growth trajectory would mimic the rise of Chinese tourists, from 800,000 in 2008 to more than 10 million last year.

Preecha Champi, a Thai Hotels Association board member, sas Indian tourists differed from Chinese ones in that they rarely came as part of a tour group because they are already confident in their English.

“The Indian market shares a lot of similarities with the Chinese. Visitors from both countries can fly here in 3 to 4 hours, they have about the same population and have experienced GDP growth, but there are 600 million Indians who are younger than 25 years old and we think this group of people will be part of the future of Thai tourism.”

In addition to visiting Thailand, Indians are increasingly choosing the country as the location of their weddings – with some 200 Indian couples tying the knot there each year, according to the TAT.

“Couples and their families spend around 8 to 9 million baht per wedding package at Thailand’s five-star hotels in Bangkok, Hua Hin, Phuket and Pattaya.”

“There could be some 300 to 400 guests who fly in for three to four nights of celebrations and they consider Thailand a very cost-effective destination to host a wedding.”

When not splashing the cash on their nuptials, however, Indian visitors have gained a reputation as hard bargainers. In the Indra market in Pratunam, for example, a stallholder was recently seen pleading for an extra 20 baht after a group of Indian men haggled hard to get the price of four plastic raincoats down from 156 baht down to just 100.

Ping, a souvenir seller in Pattaya, said Indian tourists “don’t have to spend a lot to enjoy shopping in Thailand”.

“While the Chinese who come with a tour group only spend money where the group makes a stop, the Indians mostly shop at any market.”

Nonetheless, Chinese shoppers still contribute more to Thailand’s economy than any other foreign nationality. Last year, they spent some 120 billion baht, accounting for about 24% of total tourist expenditure.

India is projected to overtake China as the world’s most populous nation in eight years, and its middle class is forecast to keep expanding, so many in Thailand’s tourism industry are now looking west for the fuel of future growth.