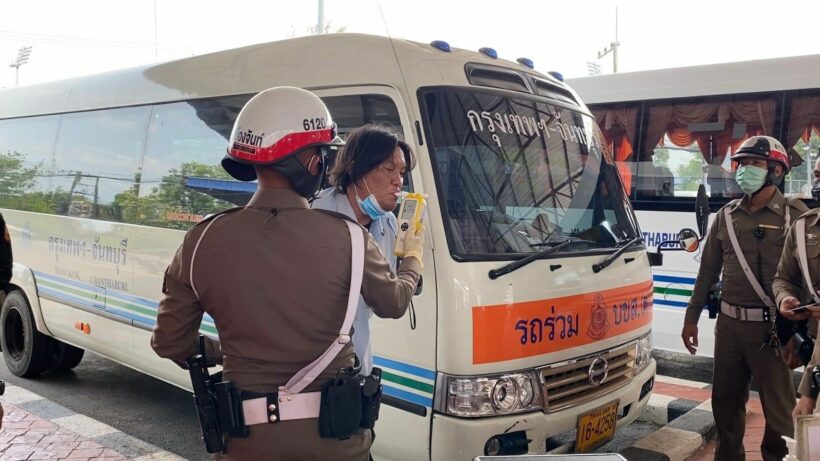 The Department of Probation is releasing its statistics for the first day of driving violations administered by the court during the “Seven Dangerous Days of Songkran” from April 11 – 17. On Monday, the court issued 459 fines, 328 of which were for drink driving cases. The top three provinces with the most drunken drivers were Nonthaburi, Ubon Ratchathani and Phra Nakhon Si Ayutthaya.

Thailand’s “Seven Dangerous Days of Songkran” road-safety campaign encourages drivers who travel during the Thai New Year to be careful and avoid traffic accidents. The Thai new year holiday period is both the busiest and the most dangerous each year as Thais head home for family festivities.

The authorities are enforcing strict measures, again, and setting up checkpoints all over the country to monitor the traffic closely and make sure holiday excursions are festive, not fatal. The same checkpoints and safety campaign has been rolled out for the last two decades with the same result each year – record carnage, drink driving and speeding offences.

Today, the director-general of the Department of Probation, Witthawan Suthonkhajit, said that more than 70% of traffic violations were for drink driving. In addition, he said there were also 123 cases of using drugs while driving and 8 cases of reckless driving.

Speeding and drink driving always fare highly in each year’s statistics, particularly in young males under the age of 25.

The authority added that drivers charged for drink driving would be screened using an alcohol screening test. If a suspect was found to be drunk or have a high risk of addiction or alcoholism, they would be sent to state treatment facilities. Moreover, they would be required to participate in a training on how to drive safely and would have to complete social services, such as cleaning traffic signs or trimming trees along the road.

Pompies
All well and good but statistics released in recent years have shown that there were more drunk pedestrians than vehicle drivers. So where are these people being tested? My guess is that they will not be tested, recorded and convicted…

palooka
They missed my neighbour, tried to ride his bike 300 metres to shop to buy more whiskey, fell off his bike. Went to help take his bike 20 metres back home and then helped him, he couldn't walk 1 metre.…
Skip
Let's ban the sale of alcohol for certain hours during the day... as it is certainly the fault of the alcohol that these people are drunk and reckless... oh wait... we already do that.

DoUKnowWhoIAm
16 hours ago, Thaiger said: 8 cases of reckless driving. I drove from Chumphon to Bangkok yesterday, I think I came across 8 cases every minute, it seems to be a racing game. Everyone wants to drive in the VIP…
Ramanathan.P
Just cancel the driving permits and license of those who are drinking and driving. Deprive them having any new license for next 5 years. Maximize the penalty for driving without a valid license and permit.....strict enforcement is the only way…