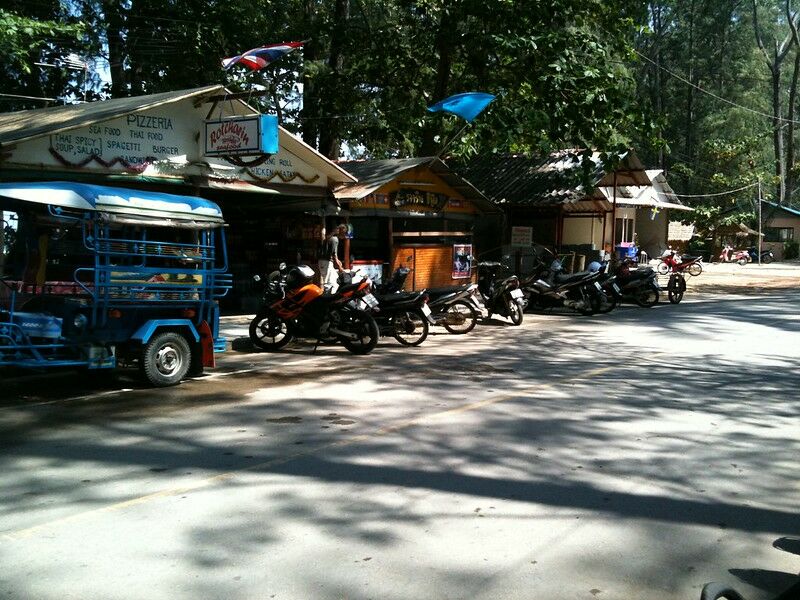 A Thai man has died after over shooting a curb and hitting a tree in Phuket Town last night. 36 year old Narongchai Samat, from Phang Nga, became the 23rd person to die on Phuket roads this year. Phuket City Police were called around 10:15pm last night, to the scene of the accident, which was near the Phuket office of the Department of Disaster Prevention and Mitigation on Damrong Road.

Kusoldharm rescue workers and an ambulance from Vachira Phuket Hospital joined police at the scene. They found the body of Narongchai lying on the ground about 30 metres away from the road. Nearby was his blue Honda Dream. Medical examiners say he suffered from fatal head trauma, and wasn’t wearing a helmet at the time of the accident.

Police say witnesses told them he was riding at speed along the road, which was slippery from rain. They say he overshot the curve, hitting a large tree. They say his body was taken to Vachira Phuket Hospital for further examinations and it was released to his family so they could hold a funeral for him.

Meanwhile, officials set a target of 0 fatalities this week on Phuket’s roads for the upcoming 7 days of Danger road-safety campaign that will run over this Songkran holiday, or Thai New Year. The campaign will be enforced from April 10-16. Since January, 3,912 people have been killed and 255,656 have been injured on Thailand’s roads, according to the Thai Road Safety Committee website.

In Phuket alone, 23 people have died and 3,380 have been injured in road accidents since the start of the new year. During Songkran, the roads become dangerously wet as water-splashing and water-fights consume the country as they ring in the Thai New Year, but this year water-splashing is banned due to Covid-19 restrictions that aim to prevent the possible spread of the virus.

Phuket to open on July 1 – first in Thailand