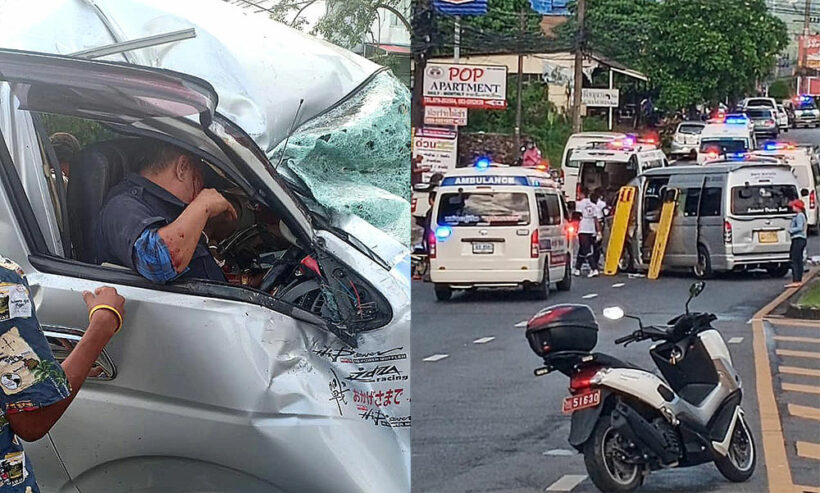 A woman has died and nine others injured in three separate incidents in Phuket.

In the first accident, in Muang district, eyewitnesses say a Toyota Vios swerved before overturning and ending up on its roof. A 42 year old woman, Netchanok Det-arn was thrown from the car and seriously injured. The driver, who hasn’t yet been identified, was slightly injured and trapped inside.

Netchanok was rushed to hospital but pronounced dead on arrival.

A second incident occured when another Toyota Vios crashed into an electrical pole in Thalang district. The car was totalled and the power pole damaged. Two women in the car, 29 year old Rinrada Sukkaew, a school teacher, and 26 year old Supawadee Songsri, were injured and rushed by rescuers to Thalang Hospital. Police say the two were returning home from a friend’s birthday party.

In the third incident, five Turkish tourists and their Thai driver (photo) were hurt when the van they were travelling in was hit by a pickup truck in Kathu.

According to police, a Mitsubishi pickup skidded over the median and hit the van head-on, trapping the driver.

The van, which was taking the five from Patong beach to Phuket town, was badly damaged. The Thai driver, 51 year old Sophan Sahankrit and the passengers, were all admitted to Vachira Hospital.

The tourists have been identified as Ismail Dogan, Ergun Bas, Ibrahim Inel, Gursoy Salli, and Salih Koca. The hospital says Dogan and Inel were later released, while the other three were kept in for observation. Koca required surgery to remove pieces of glass from his throat.

The pickup truck was also heavily damaged and ended up on its rood on on the road. Miraculously, its driver, 30 year old Wattana Artduangdee, was unhurt.