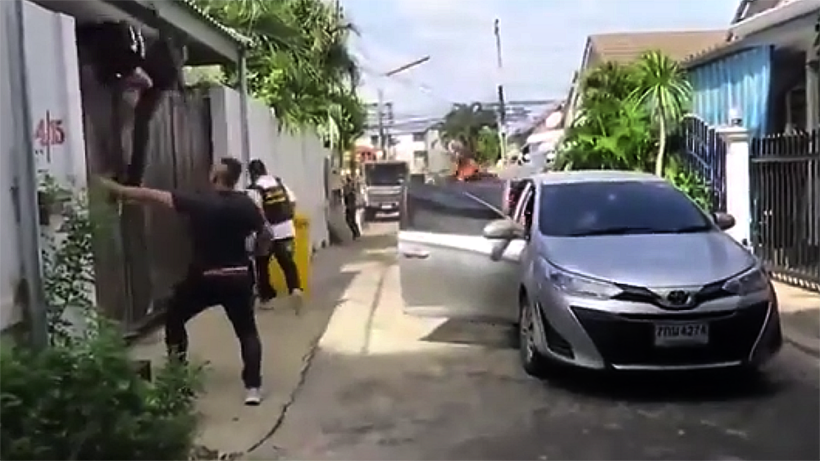 PHOTO: Road on a home in the Nong Prue district last week – YouTube

Police have launched a manhunt for the alleged kingpin of a Pattaya-based drug ring, just days after arresting six members, including three Australian Hell’s Angels members. Read that so try HERE.

Tihomer Stojic was arrested at his girlfriend’s house in Buri Ram on November 28, while Jamie Robert Hanson and Steven Brett Hovi, were busted in separate raids on their Pattaya homes a day earlier.

All are accused of smuggling methamphetamine and heroin to the Hell’s Angels and Comanchero biker gangs in Australia. Police told British media the head of the ring is a British national Christopher Depp, who has fled Pattaya and remains at large.

Stojic escaped to Issan when his alleged partners were arrested, but has been caught and brought back to Pattaya. Police searched his home and found 20 grams of crystal methamphetamine in his Mercedes-Benz, along with marijuana.

The previous day, police climbed closed gates at two properties and broke down doors to maintain the element of surprise when arresting the others.

Hanson and Hovi were caught with over a kilogram of crystal methamphetamine, a pistol, drug paraphernalia and financial records of a million baht worth of drug deals.

The raids, with cooperation from the Australian Federal Police, are seen as a major blow to violent Australian biker gangs, who have increasingly used Pattaya, and Thailand in general, as a base for drug-smuggling.