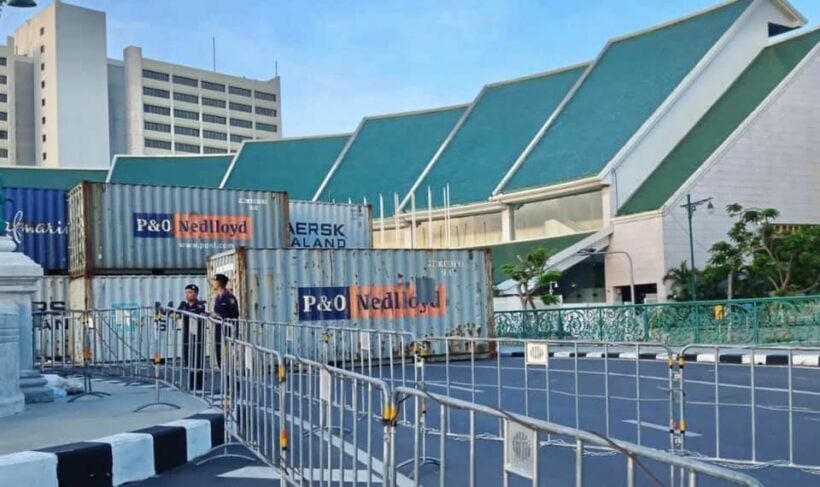 The hashtag #รถติด, (traffic jam), was among Twitter’s top 3 trending hashtags this morning as Bangkok motorists battled congestion caused by the police’s attempts to block protesters from the Crown Property Bureau.

First they used small portable metal barricades, then razor wire, then concrete blocks, then old buses. Now they’re going for the heavy “blockade” artillery – steel shipping containers. Officers secured the roads surrounding the Crown Property Bureau with the containers as barriers, which in turn caused traffic jams in the capital, despite confirmation that the protest location had changed. Photos of the containers put in place to act as makeshift barriers were widely shared on social media.

Last night, protest leaders confirmed the location of today’s rally has shifted from the Crown Property Bureau to the headquarters of the Siam Commercial Bank in the Chatuchak district of the capital. Activists say this is to avoid clashes with rival royalist groups who they claim are being sent to confront them. The Free Youth Movement posted confirmation of the new location on social media at around 10.30pm last night.

“Breaking: The November 25 rally will take place at SCB headquarters! This move is to avoid clashing with an organised mob and avoid playing the tyrant’s game. Meet us there at 3pm to claim back the property that should have been the people’s.”

The change of venue has thrown the police into confusion as they’d already shipped in up to 6,000 police to assist with “crowd control” around the Crown Property Bureau buildings.