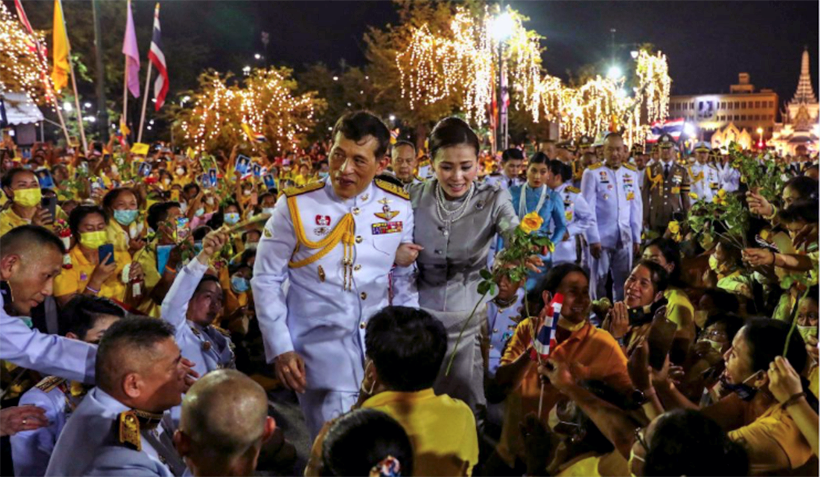 In a rare moment, and certainly the first time commenting about the current political unrest, His Majesty King Vajiralongkorn has described Thailand as “the land of compromise”.

The comment came in response from a question by Jonathan Miller, a correspondent of British broadcaster Channel 4, who was part of an audience of international media invited to sit among a crowd of royalist supporters in front of the Grand Palace. A CNN correspondent was also a part of the small foreign media contingent.

HM the King had been presiding over a ceremony to change the costume of the Emerald Buddha in Bangkok before again coming out to greet a crowd of well-wishers, the second time during his 3 week visit to Thailand that he has interacted with supporters, mostly clad in yellow shirts.

The short, but frank exchange, even the access by foreign media, are a move that signals the palace is trying to improve the monarch’s image to a wider international audience. This was the first time that the 68 year old Thai Head of State has spoken to international media since 1979. At that time he was still the Crown Prince.

The current protest situation is unique, adding reform of the Thai monarchy to the usual list of political demands. This time, too, the ranks of the protesters come from the country’s universities… younger, educated Thais, not the past collection of opposition and veteran politicians with a political axe to grind.

The series of protests, raging for 4 months now, are the biggest challenge to the ruling establishment in decades – the Bangkok ‘elite’, the Army and the ‘Palace’.

The protests have broken the entrenched taboo on speaking openly about the Thai royal family in public. Before a sensational reading of a 10 point manifesto on August 10 by a young 23 year old university graduate, criticism or discussion of reform of the Thai monarch were simply never discussed in a public forum. Thailand has some of the world’s strictest lèse-majesté laws. Criticising the King, Queen, or members of the Thai royal family, carries a maximum 15 year prison sentence.

First the protesters, and now a broader Thai community, are now discussing the role of the Thai monarch and scrutinising King Vajiralongkorn’s wealth and power, and his preference to live much of the year in Bavaria, Germany.