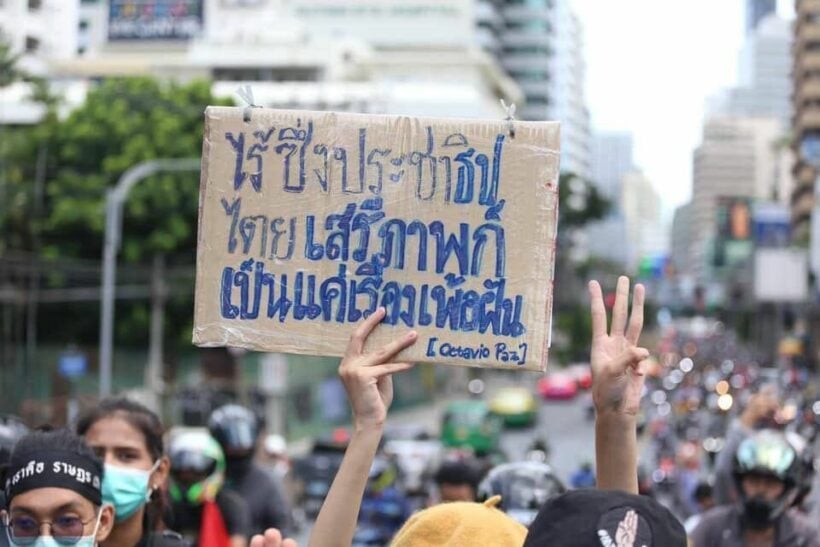 A 29 year old protester injured in a Bangkok rally last week has lost sight in one eye. Tanat Thanakitamnuay’s family says his right eye was hit by a “blunt cylindrical object” – which Coconuts Bangkok says was a tear gas canister – tearing the cornea, rupturing the eyeball, and causing his retina to peel off.

Several protesters have been injured after clashes with police over the past week. A 15 year old (thought to be around 20 years old before he was identified) is in a coma after he was shot in the neck at Monday’s protest in Bangkok’s Din Daeng district and 14 year old was shot in the shoulder.

Both the Royal Thai Police and the Ministry of Foreign Affairs have made statements saying officers did not use live rounds to break up crowds, but ammunition of what police say is from an unknown origin was found at the scene. Officers say the gunshots were fired from a “third party.”

Doctors say Tanat’s loss of sight in his right eye is permanent. The family now pays they will seek legal action against police as officers have used rubber bullets, tear gas, and water cannons to break up protests over the past year as activists, many who are students, call for democracy. Recent protests have focused on pushing PM Prayut Chan-o-cha to resign due to what they say is mismanagement during the Covid-19 crisis.

Tanat, also known as “H-iso Luk Nat,” was injured during a protest last Friday, August 13. The family, who runs the prominent upscale condominium company Noble Development in Bangkok, blames Tanat’s injury on the crackdown by police. The family plans to take criminal, civil and other legal action against those responsible.

Amnesty International’s Asia-Pacific Deputy Director, Emerlynne Gil, says Thai authorities must urgently investigate the shootings at the Monday rally as well as all other reports of excessive force by police.

“Thailand’s government must also investigate all reports of excessive and unnecessary force by police against protesters over the past year, and bring to justice anyone found responsible of causing physical harm to protesters.”

Bob20
1 minute ago, RWD said: EXACTLY my point.  I am a guest here.  Always will be.  I have no right to criticise my hosts.  I  get pi....ed off with the many expats who think they have the right to criticise Khun…
HolyCowCm
11 minutes ago, RWD said: I have been married to my Thai wife since 1972.  I met her at university in New Zealand.  We live in Thailand now since has final phase altzheimer/dementia.  I pay for her 24/7 personal carer…
HolyCowCm
15 minutes ago, Bob20 said: And if you so dislike it here that that's your main topic of conversations, then you can catch a plane home. Even in Covid-time you are always allowed back in your country of origin. Congratulations.…
Bob20
Just now, HolyCowCm said: Congratulations. And we have a winner here. Always strikes me funny when I read this statement. For me it is not my main topic of conversation or ever has been, but do have an opinion and feeling…
HolyCowCm
31 minutes ago, Bob20 said: I think you misunderstand my post. I'm not against progress, or we wouldn't be typing here, but chiseling in a tree. I clearly said I dislike those who only complain.  Of course, I encourage better education, better…