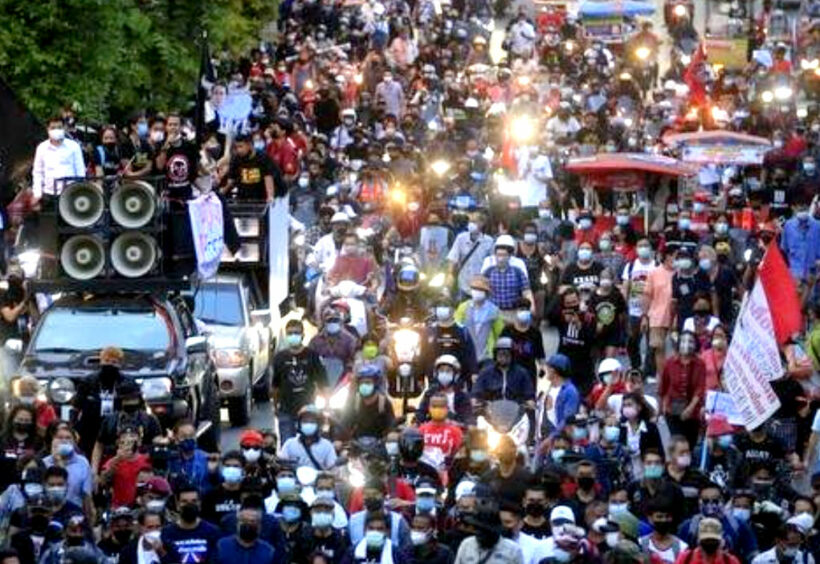 Yesterday saw many protesters commemorating the 89th anniversary of the bloodless revolution that turned Thailand into a constitutional monarchy. Today police declared they plan on prosecuting demonstrators for violating the Covid-19 emergency decree banning groups of more than 50 people and are currently gathering evidence against rally leaders and protesters.

Police officials say that the protesters exceeded the emergency decree limit of 50 people in a gathering, and were also in violation of the Bangkok Metropolitan Administration’s health safety announcement. Bangkok is currently a Red Zone under maximum strict control due to Covid-19 outbreaks.

Yesterday’s protests began at 4:30 am at the Democracy Monument and continued later into the day on Ratchadamnoen Avenue. The crowds were estimated to be about 500 people, led by activists Jatupat “Pai Dao Din’” Boontaraksa, human rights lawyer Arnon Nampa, Panupong “Mike” Jadnok, Atthapol “Khru Yai” Buapat and Promsorn Veerathamjaree, many of whom are out on bail after lese majeste charges were levied against them for their involvement in previous protests.

The protests included signature collection to present a constitutional amendment to Parliament to discard the 20-year national strategy and remove the Senate, a bold proposition that has been gaining traction and public support. A group called Re-Solution collected signatures, stating they have almost 47,000 signatures now, just 3000 shy of the 50,000 needed to submit the amendment.

Protesters from another group were pushed back by crowd control and the threat of water cannons and detention trucks as they attempted to march to the Government House to demand that PM Prayut Chan-o-cha resign. The Prachachon Khon Thai group relocated to Nang Loeng intersection citing rumours of another group plotting to provoke violence. That group is planning more protests tomorrow.

The Thai Mai Thon group also demonstrated, making their way to Government House and rallying until about 8 pm. They also have plans to protest again tomorrow at Phan Fa Bridge.

Poolie
'The crowds were estimated to be about 500' Supplemented by 450 people on their way to work. Oh well I guess try today, no difference. It's lost its attraction.  That photograph is old too.

Poolie
'He instructed the crowd of protesters that the group will reconvene at 3 pm tomorrow' They were all told individually. Well it filled 3 minutes.  Including 'Hello, who are you? Got three fingers? Good.'