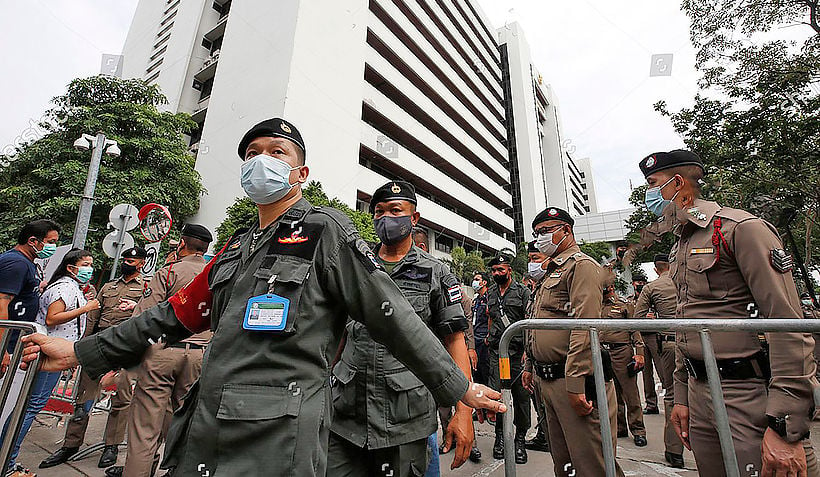 Security at Bangkok’s Criminal Court was stepped up substantially today for the arrival of 4 pro-democracy and human rights activists arrested yesterday. Anon Nampa, Buramee Chairat, Suwanna Tanlek and Korakot Saenyenphan were all arrested on charges of “inciting public unrest” and other offences related to the anti-government demonstration held on July 18 at Bangkok’s Democracy Monument.

Police were deployed to the court from around 8am. Small groups of supporters also began showing up.

Anon, the outspoken lawyer who was the first protester to call for reform of the Thai Monarchy at a Harry Potter-themed protest on August 3, was arrested in front of the Criminal Court last night. He was detained at Chana Songkhram police station. The other 3 were held at Samran Rat police station for their roles in the August 3 demonstration.

Police were expected to ask the court to deny bail and extend their detention for another 12 days, the maximum allowed under Thai law without an indictment.

Thailand’s Royal Family is held in high regard and deeply respected by a large percentage of the population. Legally, HM the King sits atop the country’s constitutional monarchy as the Head of State. Defaming or insulting the Royal Family is punishable by up to 15 years in prison under Thailand’s strict lèse-majesté law, although His Majesty has reportedly asked PM Prayut Chan-o-cha not to enforce it.

Meanwhile, the Thai PM Prayut Chan-o-cha held a meeting yesterday where he spoke to military and security agencies to about preparations for more student demonstrations, expected to escalate during September when there is a shuffle of the country’s current military incumbents.