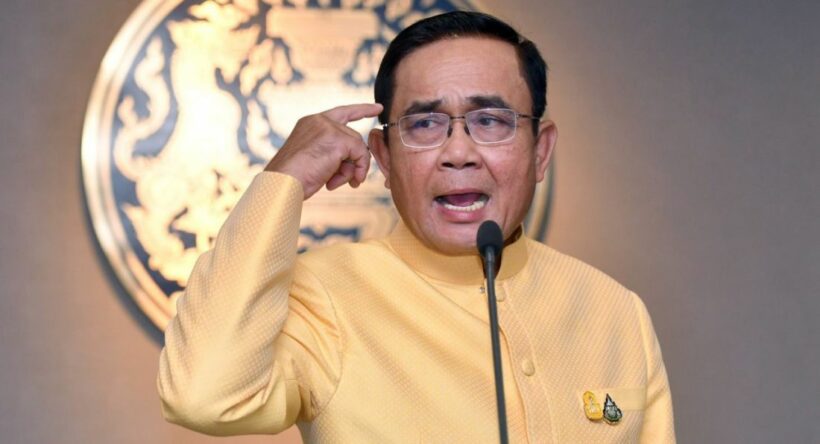 PHOTO: “Hello?! Did someone ask me something?

Mr. Pichet Sathirachavan, leader of Prachatham Thai party, has formally announced they have decided to break away from the governing coalition to join the independent opposition camp with the New Civilized party.

Yesterday PM Prayut Chan-o-cha covered one of his ears with his hand as he pretended not to hear one of many questions about the announcement that the Prachatham Thai party will pull out of the government’s coalition.

Mr. Pichet Sathirachavan told the media that his party remained upset over a remark, allegedly made by the embattled Deputy Agriculture Minister Thammanat Prompao, the government’s ‘fixer’, describing the ten smallest parties in the government as “monkeys which need to be fed with bananas every now and then”.

However, Energy Minister Sontirat Sontijirawong, whose hearing appeared to be much better than the PMs, and in his capacity as secretary-general of the Palang Pracharat party, told the media that the party was trying to meet with Mr. Pichet to discuss the problem caused the offensive remark.

He declined to comment on whether he thought the party would be able to convince Mr. Pichet to change his mind but did say he expected the party to discuss whether Thammanat should be replaced as the government’s fixer.

At a news conference yesterday, Mr. Pichet also put on display a bunch of bananas in protest against what he considered an insult against the smaller parties.

Last week, Mr. Pichet also threatened to quit the coalition after his party was passed over for the chairmanship of a House committee.

Government loses another MP as member heads to prison

Police in Bangkok are under pressure from protesters both on- and offline after yesterday’s arrest and detention of student protest leaders. Prominent activist and human rights lawyer Anon Numpa and protest leader Nutchanon “Mike” Payakaphan were taken into police custody for 7 charges, including sedition. 30 more student protesters are wanted by police and arrest warrants have been issued. The hashtag #ตํารวจอุ้มประชาชน (Police Kidnap the People) trended this morning with over 146,000 tweets. Dozens also gathered at the Bangkok Criminal Court in Ratchada district to protest the detentions. Students have called another rally in downtown Bangkok this afternoon. Among those […] 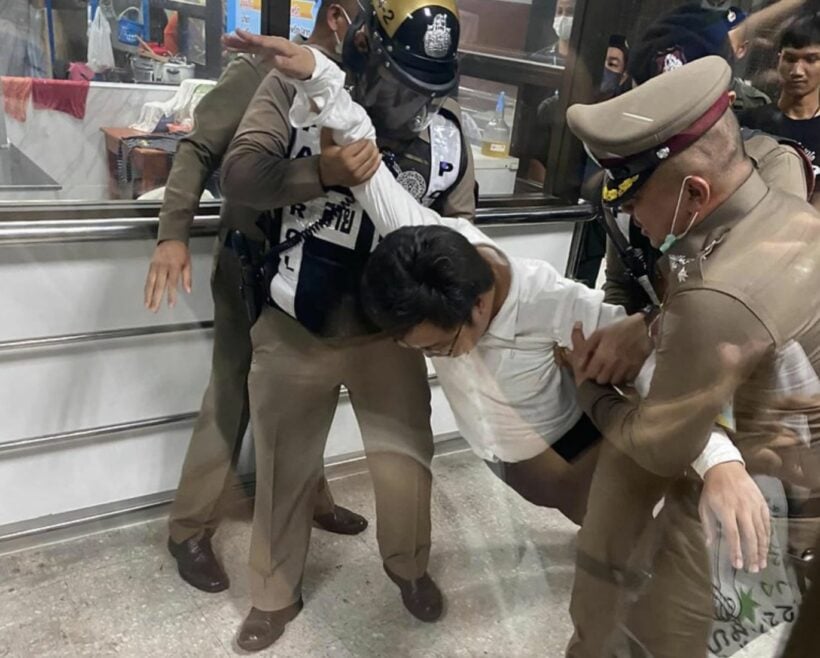 PHOTO: A crowd of around 200 had gathered in front of the Bangkhen Police Station - Prachatai

Anon Nampa, a human rights lawyer, and student activist Panupong Jadnok, are both under arrest on “sedition” charges after they took part in protests on July 18. They’ve been arrested under Section 116 of the Criminal Code and for allegedly violating the Emergency Decree. After a night of dramatic legal to-and-fro, the 2 were back in court again this morning. Anon was arrested in front of his condominium yesterday afternoon. Around 8 uniformed and plain clothes police officers came to arrest him and took him to the Samranrat Police Station in Phra Nakhon, Bangkok. Anon also posted a picture of the […]

34 year old Thai activist and civil rights lawyer and Arnon Nampha was arrested this afternoon for “sedition” and “breaching the emergency decree”. He was apprehended in front of his Bangkok condominium at around 2pm, according to the head of Thai Lawyers for Human Rights, Yaowalak Anuphan. He is currently in police custody. “Arnon can only be detained no more than 48 hours before he has to be presented to the court. Then, he will likely seek bail.” Earlier today, Arnon posted a photo of his arrest warrant on social media. The warrant accused him of committing seditious acts under […]