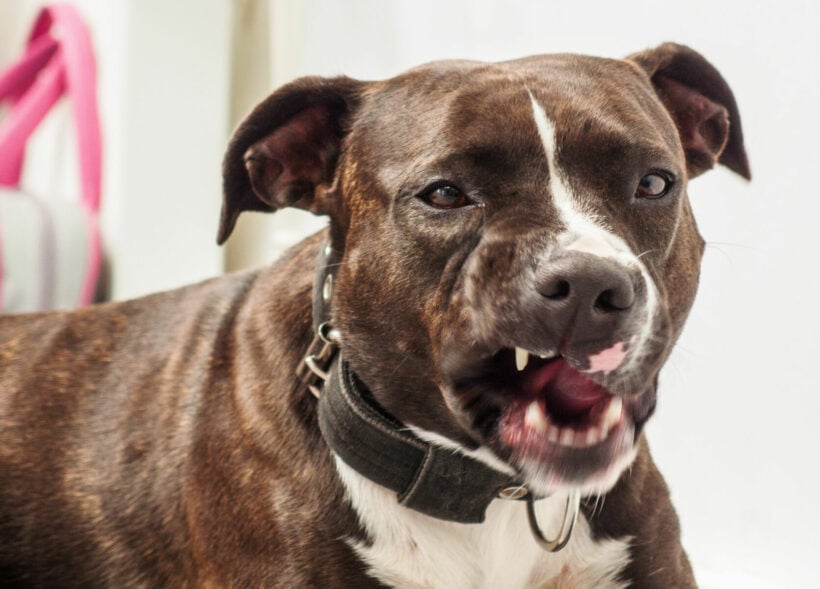 A Pattaya area man sustained severe injuries when his pet pit bull attacked him in the early hours of the morning. The incident took place in Bang Lamung with authorities being called to the scene near Soi Bang Lamung Temple.

The victim, 56 year old Wisit Sanguan, had been bitten by his own pet dog and was bleeding profusely from multiple bite wounds. The pit bull had bitten Wisit on the neck and the injuries were described as severe. The man was rushed to the nearest hospital for treatment.

Wisit’s wife told reporters that they had the pit bull for nearly 2 years, raising him since he was a 3 month old puppy. They had named him Giant. His wife reported that the man and the dog had both been sleeping for about an hour. The pit bull woke up and attacked the sleeping man, according to his son who witnessed the whole thing. The spooked dog took about 30 minutes to subdue enough to pull Wisit away, with the pit bull attacking with aggression anyone who tried to help the poor man.

The pit bull was still agitated when emergency assistance and family members arrived and eventually the Chon Buri Pit Bull Club had to be called to aid in controlling the dog. They arrived at around 10:30 am and ended up subdue the dog using anaesthetics provided by the local livestock office. They chained the dog up and were able to remove him from the premises.

Wisit is being treated for severe bite wounds, and Giant the pit bull will remain in the custody of the Chon Buri Pit Bull Club as the family does not want the dog after this incident. Pit bulls have often been the focus of controversy as they have been known to viciously attack, sometimes with deadly results.

NOTE: In an earlier version of this story we referred to a “rabid dog”. This was incorrect and we apologise for the error.