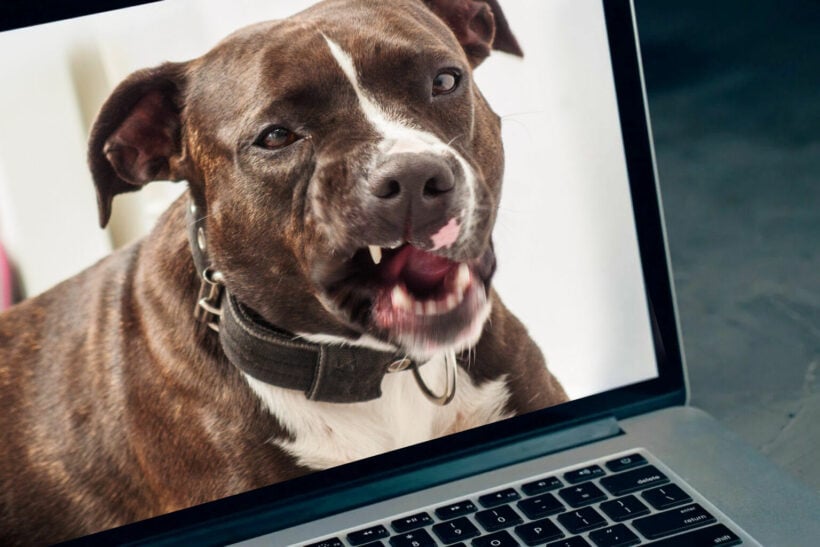 Things went from bad to worse to even worse in the story The Thaiger has been following of the man attacked by his pit bull outside Pattaya last week. After being rescued from the attack, the man died the next day from neck bites and loss of blood. Now his widow is lashing out at the wave of online attacks levied against the family and their treatment of the pit bull, threatening legal action using Thailand’s strict computer crime and defamation laws.

After the story broke about the vicious pit bull attack, many people commented online, both with sympathy for the family’s loss and with harsh criticism questioning if the dog’s attack was a result of abuse or mistreatment. The story told to authorities and press was that the man and his dog Giant were sleeping at dawn when the pit bull woke and attacked suddenly, according to the man’s son who witnessed the attack. It took 30 minutes to subdue the dog who later was still aggressive and had to be drugged and removed by the Chon Buri Pit Bull Club.

The man’s funeral is ongoing now at Banglamung Temple for 5 days, after which he will be cremated in a ceremony on April 22. The family is in mourning, and his wife has made angry statements about online reaction with people making comments without knowledge and levying strong accusations about a man and dog she says was loved by the community.

“These people making false claims online – they were not at the incident, they have no inside knowledge. They did not know what happened. My husband loved the dog very much. He loved it more than me. Many people around my husband also loved him and Giant.”

Thailand has very strong laws against libel, slander and defamation and posting online falls under the computer crimes act, carrying a punishment of up to 7 years in prison. If the widow does take legal action against people commenting online suggesting the pit bull was the victim of animal abuse or mistreatment without evidence of firsthand knowledge, the commenters could face a lengthy prison sentence.

Last year a hotel infamously prosecuted a reviewer on TripAdvisor on these same laws.

The Chon Buri Pit Bull Club took custody of the pit bull after the attack and has found a new home for Giant already in Nakhon Sawan in central Thailand. The pit bull will move to another province to an expert who works to train troubled animals, specifically pit bulls. The dog was examined by Chon Buri Pit Bull Club and was found to have no evidence of any physical abuse at all.