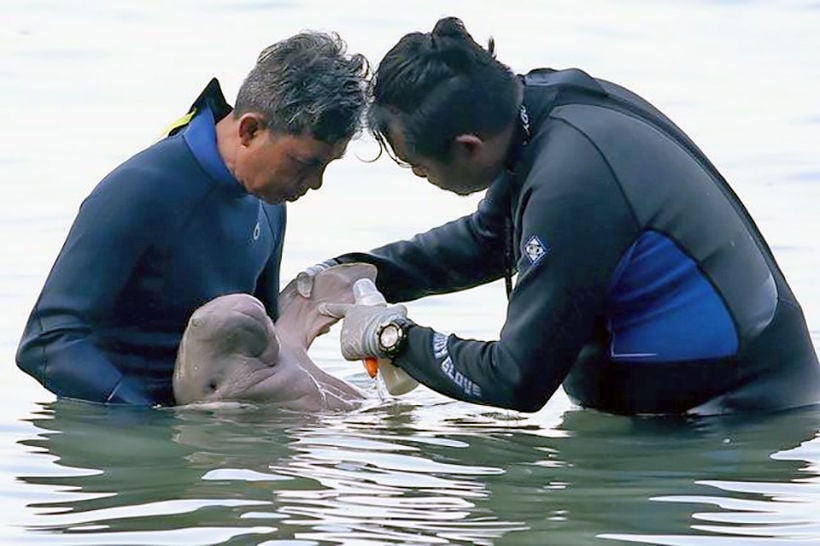 Tourists and local well-wishers are flocking to get a glimpse of ‘Mariam’. She’s become an internet hit. But that’s also caused other problems.

Mariam became an internet sensation after being rescued in Krabi province on April 29 and placed under care in a dugong conservation area at Koh Libong. She became the new face of sea conservation and is helping boost public awareness on the extinction risks faced by some 300 dugongs in Thai waters.

Mariam is the first baby dugong in Thailand raised by humans in a natural environment and her activities, especially a bird’s-eye view of a volunteer cuddling Mariam in the sea, went viral.

The Department of Marine and Coastal Resources has set up cameras for live broadcast of Mariam’s life but tourists said they would like to have a chance to see the baby dugong with their own eyes.

The high number of tourists prompted the department’s officials at the site to hold a meeting where they resolved to allow only 30 tourists at a time to enter the restricted zone to get up close and personal with the title pink mammal. Operators of group tours are now also required to inform the authorities in advance of the arrival of their tourists.

The authorities sought cooperation from operators of resorts and tuk tuk drivers to inform tourists not to make noise when they visit the site. The officials said the baby dugong has gained two kilos, going from 30 to 32kg and the authorities have extended the milk feeding period to 10 pm.