“This is a very good sign for us because many areas for spawning have been destroyed by humans. No such nests had been found for the previous five years.”

Despite the economic ravages due to the impacts of the Covid-19 outbreak in Thailand, the break from mass tourism has been a boon to Phuket and Phang Nga wildlife. Leatherback sea turtles, shy at the best of times, have been building the largest number of nests in 20 years on the Andaman Sea coastlines.

11 turtle nests have been found since November 2019, the highest number of new nests being found, according to the director of the Phuket Marine Biological Centre, Kongkiat Kittiwatanawong.

“If we compare to the year before, we didn’t have this many spawn, because turtles have a high risk of getting killed by fishing gear and humans disturbing the beach.”

Leatherback sea turtles are the world’s largest sea turtles and the fourth-heaviest modern reptile behind three crocodile species. They are considered an endangered species  in Thailand, and listed as a “vulnerable species” globally (according to the International Union for Conservation of Nature).

Leatherback turtles lay their eggs in dark and quiet areas. Up to recently, difficult to find along the coastlines of Phang Nga and Phuket. Nest thieves also dig into their nests and steal eggs, and the coastline along that patch of the Andaman Sea is prone to high tides which also poses a threat to the nests.

On February 9 this year Officials of the Department of Marine and Coastal Resources and army personnel rushed to build a fence at Mai Khao Beach on Phuket after hearing that a leatherback sea turtle had laid eggs there. The remote stretch of beach is located in the Sirinart Marine National Park, one kilometre north of Phuket’s airport. 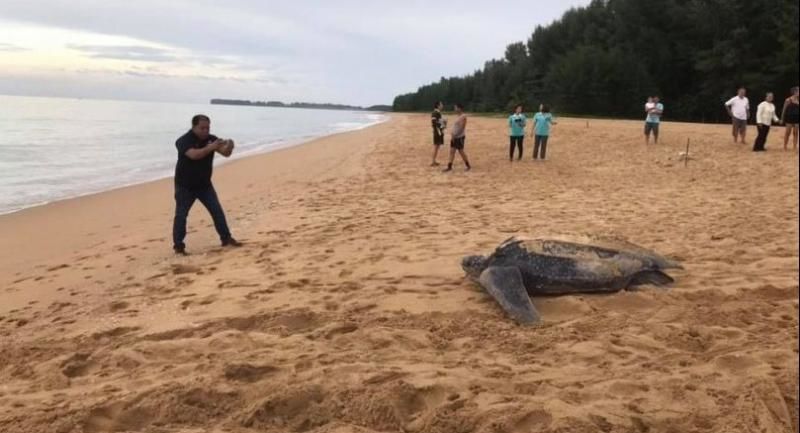