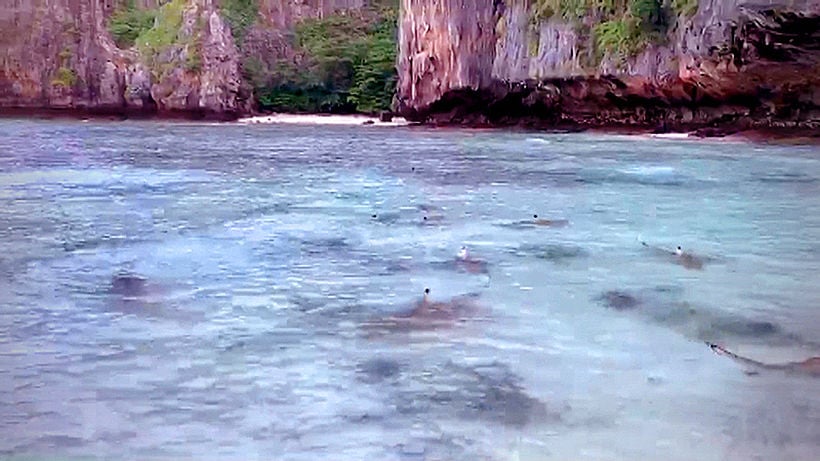 Worapoj Lomlim, chief of Noppara Tara-Koh Phi Phi National Park in Krabi, says that more than 10 Blacktip reef sharks had been spotted hunting near Koh Phi Phi Ley’s famous Maya Bay, some of them more than 2 metres in length. The sightings were made yesterday at the closed beach.

He noted that the presence of the marine creatures has been brought about by the closure of Maya Bay to allow the ecosystem to recover. The highly popular Bay was attracting up to 6,000 tourists a day at its peak with boats parking close to the beach and throwing their anchors overboard. The beach, the surrounding corals and the local marine life were suffering from the popularity of tourism in the Bay.

Maya Bay was closed to tourist on June 1, 2018. The Bay first became famous as part of the setting for the 2000 film ‘The Beach’ starring Leonardo Di Caprio. Read more about the closure HERE.

Worapoj Lomlim says that as the mating season for this species of shark is usually between the months of November to March, the Blacktip reef sharks are being monitored by researchers from Department of National Parks, Wildlife and Plant Conservation and Kasetsart University.

Ne noted that the birth of a shark in Maya Bay will increase the importance of preserving the island and limiting any tourism in the future.