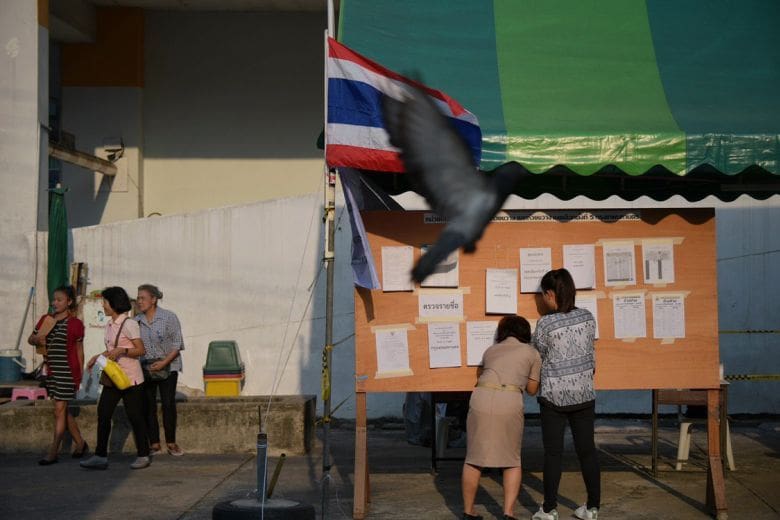 The Election Commission says the official results of the Thai general election will be announced today.

By the close of counting last night around 92% of the votes had been counted. The bleary-eyed commission decided to delay the announcement until this afternoon.

The EC chairman says the announcement of winners in each constituency had to be deferred because expat’ votes from New Zealand had not arrived on time.

The election results were widely followed as internet sites went into meltdown (including The Thaiger) as people clambered for the latest booth counts.

The map, courtesy of Bangkok Post, shows that general voter sentiment was largely unchanged after five years of military rule with the north and north east still favoring the Pheu Thai (pro-Thaksin, pro-democracy) party, versus the rest of Thailand. 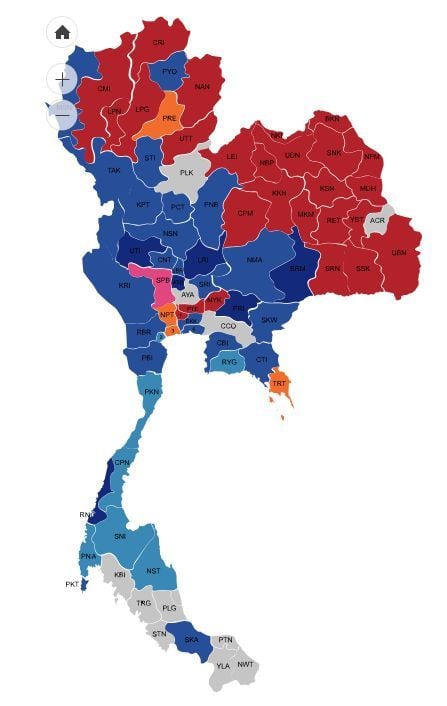 The Palang Pracharat (pro-regime) party and Pheu Thai were neck and neck all evening as the numbers rolled in from booths around the country. The two big surprises during the evening were the high polling of the new Future Forward party which clearly hit the right note with the seven million new eligible voters who exercised their democratic right for the first time. The other key aspect of the evening was the failure of the Democrats to woo their past constituency.

Thailand’s former PM Abhisit Vejjajiva said he will resign as leader of the Democrats.

State-owned television station MCOT calculated the distribution projection of all 500 lower house seats, including party list winners, also based on the election authority’s data. At 10 p.m., it forecast 146 seats would belong to the Thaksin Shinawatra-linked Pheu Thai, followed closely by the junta’s Palang Pracharat Party, at 141. MCOT expected the Future Forward Party to win 85 seats, Bhumjaithai 55 and the Democrats 36.

If MCOT’s estimate is accurate, the junta will have enough seats to make their candidate, Prayut Chan-o-cha prime minister.

The Bangkok Post reported an unofficial estimate for all 500 seats, also based on commission data. With 93% of the vote counted, Pheu Thai had the lead with 129 seats. Palang Pracharat followed with 117. Bhumjaithai was seen taking 49 seats, with the Democrats winning the same number. Future Forward was seen taking a surprising 78 seats.

BUT, the big issue that will be discussed today, is if Pheu Thai and Future Forward decide to collaborate, they could form a coalition that would come close to having a majority of lower house seats.

According to popular vote figures from the EC, Palang Pracharat garnered the most votes with 7.5 million, with Pheu Thai following at 7.3 million. But these figures do not necessarily reflect the actual makeup of the parliamentary seats to be announced some time today.

The lower house is made up of 500 members, 350 will come from single-seat districts. The remaining 150 will be distributed among parties based on how they fared nationwide.The current constitution states that the PM should be chosen by a majority of all 750 legislators, a number that includes 250 Junta-appointed senators.

An anti-junta coalition would need 376 lower house seats if its preferred candidate is to become PM.

Reports of vote tampering will be investigated by police