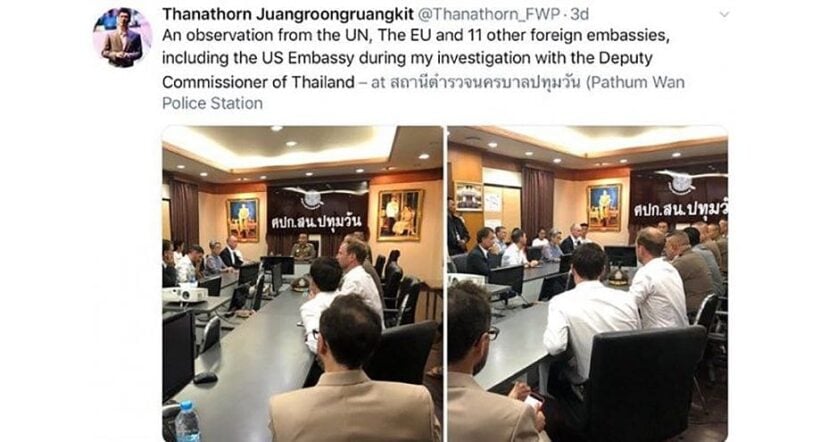 The deputy national police commissioner is denying that a group of foreign diplomats were present at a questioning session when the Future Forward party leader reported to Bangkok police on Saturday morning over sedition charges.

Pol General Srivara Rangsibhramanakul said the diplomats were invited to a briefing after the interrogation of Thanathorn Jungrungruengkit at Pathum Wan police station.

The Future Forward leader, facing sedition charges for an alleged offence he committed four years ago, tweeted two photos showing the diplomats sitting in a room with Srivara at the top of the table.

Thanathorn claimed that the diplomats attended the interrogation.

“Observed by the UN, the EU and 11 other foreign embassies, including the US Embassy, during my interrogation by the deputy commissioner of Thailand,” he tweeted.

His tweet triggered criticism about why the diplomats were allowed to be present in the room.

The Thai Foreign Minister Don Pramudwinai yesterday lashed out at the diplomats’ presence at the police station, despite the claim that they only wanted to observe the process.

Don said the only way a diplomat could attend a police interview was if the suspect was a citizen of the country they represent.

Srivara said the 12 diplomats observed the case. “I did not know how they came up. They began to ask many questions after the questioning of Thanathorn finished. Police then invited them to a briefing,” he said.

“They did not attend the questioning. We invited them in for the sake of good manners. They asked, we answered. No problems at all,” he said.

Srivara said he was willing to talk to the diplomats to make them feel at ease. He showed them documents concerning the case, such as an order to set up an investigation.