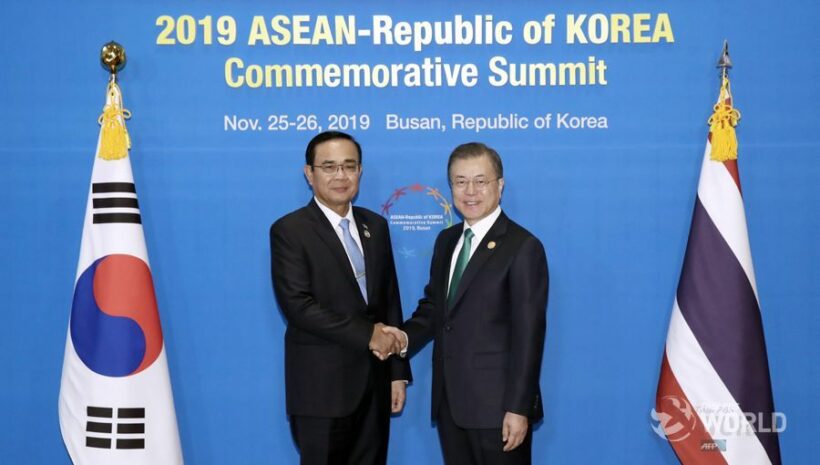 Thai PBS World reports that the three agreements were signed yesterday, the first being between Thailand’s Ministry of Higher Education Science, Research and Innovation and South Korea’s Ministry of Science, Technology and Communications.

The first MOU is an agreement to promote mutual cooperation between both countries in matters of scientific research and development.

The second MOU is an agreement to jointly promote business and industry development in both countries. The MOU was signed by representatives from Thailand’s Office of the Committee for the Eastern Economic Corridor and South Korea’s Office of Trade and Investment Promotion.

In the third MOU Thailand and South Korea agree to work together on the exchange of information related to Thai nationals working illegally in South Korea.

The PM met with the South Korean President, Moon Jae-in in Busan, South Korea yesterday, where he acknowledged South Korea’s increasing role in Southeast Asia and its support during Thailand’s ASEAN chairmanship this year. The PM also recognises South Korea’s expertise in technological sectors such as electric cars, robotics and bio-engineering, encouraging the country to invest in Thailand’s technology sector.

Thailand to export additional 1 million tonnes of rice to China