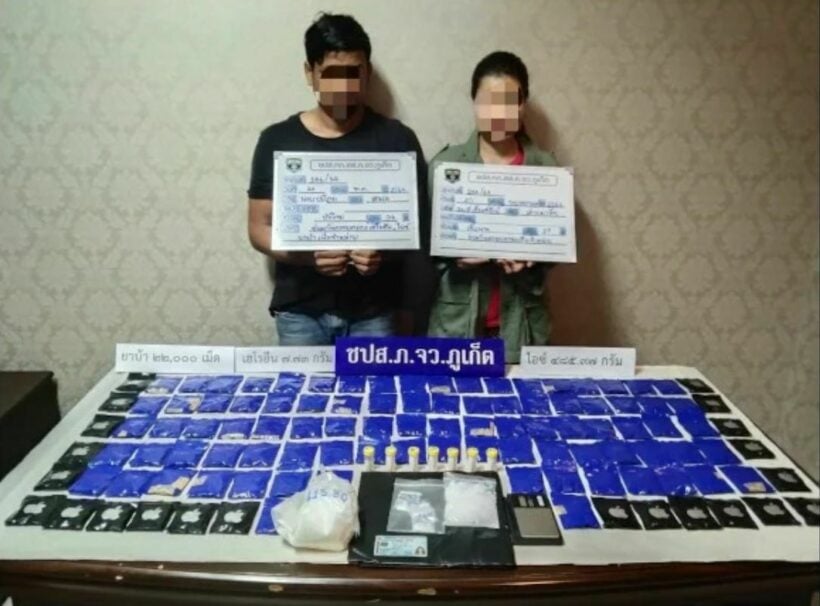 PHOTO: A couple learned that getting arrested for drugs is bad, but at least you get a souvenir photo. (via Phuket Provincial Police)

A drug bust just north of Phuket Town has netted a cache of 22,000 meth pills, over 480 grams of crystal meth, and almost 8 grams of heroin. Police arrested a man and a woman in the Rassada area on Tuesday in the early evening according to a press release today from the Phuket Office of the Public Relations Department.

Phuket Provincial Police apprehended the man, Yakon “Kob” Salae, and his girlfriend Sansanee “Nan” Denmalai on Tuesday around 6:30 pm. The 36 year old man is from Pattani and his 27 year old girlfriend is from Phang Nga. According to police reports, the couple was arrested in the drug bust at home in Moo 2 in Rassada on Phuket.

Police uncovered the 22,000 yaba pills along with just under 486 grams of crystal methamphetamine, popularly called ice in Thailand, and 7.78 grams of heroin. They also seized a black Honda Civic with a car registration in Songkla and a red and black Honda Click motorbike. A bank book for an account holding 14,600 baht was also taken as evidence.

Kob and Nan were taken into custody and moved to the Phuket City Police Station where the traditional drug bust photoshoot was done. They’re being charged for possession of Category 1 drugs with intent to sell. Police hope to use information gathered while interrogating the couple to track down and arrest more drug traffickers higher up in the drug network, and will continue their investigation.

The couple claimed that they had just recently become involved in drug dealing, due to financial hardship in the current economic crisis. The man had previously been working selling traditional Thai snacks at a petrol station, while his girlfriend was gainfully employed working in a local hotel. When the Covid-19 pandemic struck, the tourist island of Phuket was hard hit, and the couple became unemployed and increasingly desperate for money, eventually turning to the world of drug trafficking.