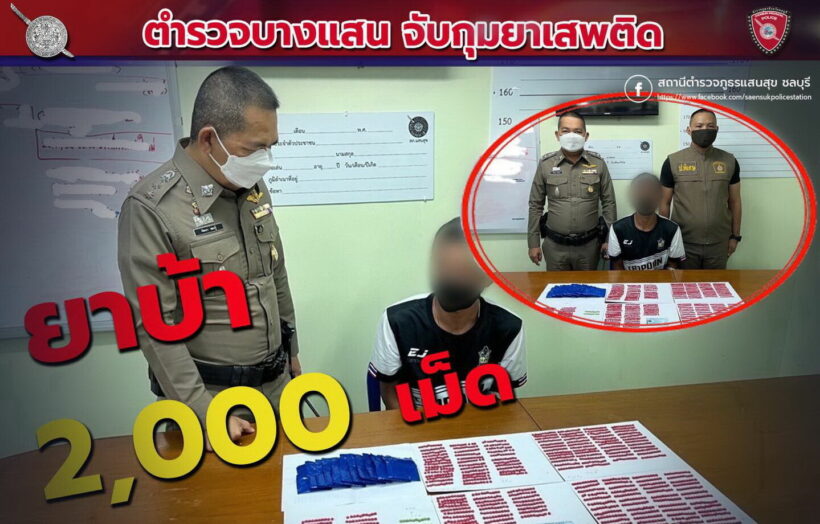 In the Mueang Chon Buri district of Chon Buri, police arrested a suspected drug dealer who was reportedly in possession of 2,000 meth pills. The arrest was carried out by Saen Suk Police as the 28 year old man was captured on Soi 5 of Sukhumvit Road in the Saen Suk sub-district, where police raided several restaurants selling alcohol illegally over the weekend.

Like the restaurants selling booze that was not legal, police say the man was arrested selling pills that were not legal. 2,000 methamphetamine pills that the man was in possession of were seized according to police.

The 28 year old man was nabbed following a sting operation that police set up in order to catch him after getting a tip-off about a drug dealer in the area. Police stated that they received a report from an informant alleging that the man had been selling the meth pills to local teenagers.

The man remains in custody as of now, and for having a large number of meth pills he faces charges of illegal possession of category 1 drugs with the intent to sell.

This bust is much smaller than a bust about 2 and a half months ago in Chon Buri where 780,000 meth pills were seized in a massive bust. Thailand has been wrestling with the problem of drugs coming in across the borders and the Kingdom being used to transit drugs from neighbouring countries before shipping them out across Southeast Asia and Australia. A few days ago a massive shipment heading to Taiwan of nearly 900 kilogrammes of meth was thwarted at Bangkok Port.

Jason
Oh and the obligatory selfie with the local police.....gold!!!

palooka
Never any money seized, must be why he was selling drugs he was broke.

Faraday
How much per pill are they?

Bluesofa
6 minutes ago, Faraday said: How much per pill are they? Are you asking for a friend?

Faraday
11 minutes ago, Bluesofa said: Are you asking for a friend? No, just trying to get an idea of how much profit these people make.