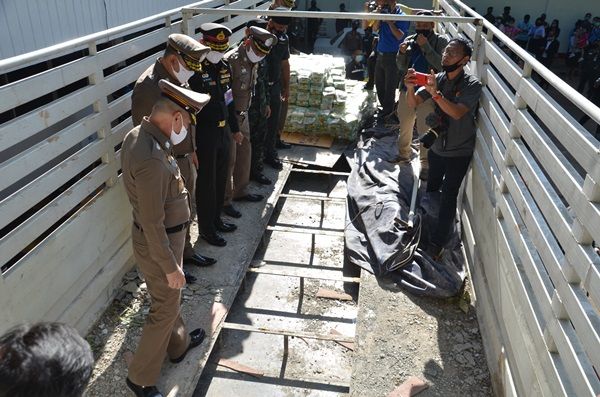 Police found 1.6 billion baht worth of illegal drugs, including methamphetamine and heroin, inside a 12-wheel truck trailer at a checkpoint in Kanchanaburi near the Myanmar border. The national police chief says it’s the province’s biggest drug bust.

The 59 year old driver, Sakchai Kaerod, was arrested. Thai PBS did not mention the charges the driver is facing. Sakchai says he was hired for 150,000 baht and was ordered to drive the truck full of drugs from the Three Pagoda Pass at the Thailand-Myanmar border to the Nakhon Pathom province in Central Thailand, according to police.

When searching the truck, police found packages of drugs hidden in compartments built into the floor of the trailer. The drugs added up to 1,385 kilograms of crystal methamphetamine, 77 kilograms of heroin and 500 kilograms of ketamine.

Phayao gunmen kills 3, then himself