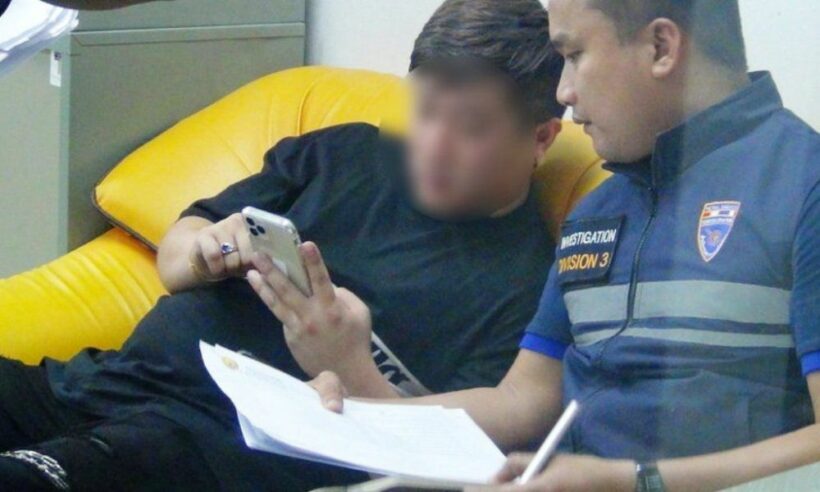 PHOTO: Singaporean Mark relates his story of abduction to police

A Singaporean man stands accused of masterminding a plot to abduct a fellow Singaporean from Suvarnabhumi Airport last Thursday. Police report that the suspect, identified only as ‘Kim’, will be charged with conspiring to commit robbery, illegal possession of firearms, illegal detention and the physical assault of 32 year old compatriot Mark Cheng Jin Quan. Mark owns a software and application startup and Bitcoin trading business and is currently assisting Bangkok police with the investigation.

The suspect allegedly joined the victim in a taxi from the airport but soon forced him into a pickup truck at a petrol station near Chacherngsao city, south of Bangkok. The victim was driven to a house in a wooded area where he says the gang held him and assaulted him to make him transfer a million US dollars in Bitcoin “to repay the debt”.

“They took off my clothes, splashed ice water on me and gave me electric shocks. They demanded that I hand over a million dollars in Bitcoin.”

Mark told police he was shire they were still going to execute him at gunpoint until he managed to escape.

Mark told the robbers he could only give them 60,00 US dollars in Bitcoin. But even after he paid them, they took him to a a paddy field and pointed a gun at his head. He had earlier heard men digging what he believed to be a grave, he told local media. The motive appears to revolve around a business conflict involving four million baht, according to provincial police commander Montri Yimyaem.

During the total ordeal, the victim wired about a million baht to the gang. Chachoengsao police are now checking related transfers and expect results soon. On Sunday police told reporters “substantial progress had been made” and a search of the suspect’s home had yielded evidence of tools that were used in the victim’s abduction.

Police say they will gather more evidence before commenting further, but are confident officers will make an arrest and retrieve the victim’s assets.

Man in custody after allegedly throwing grenade into Bangkok apartment