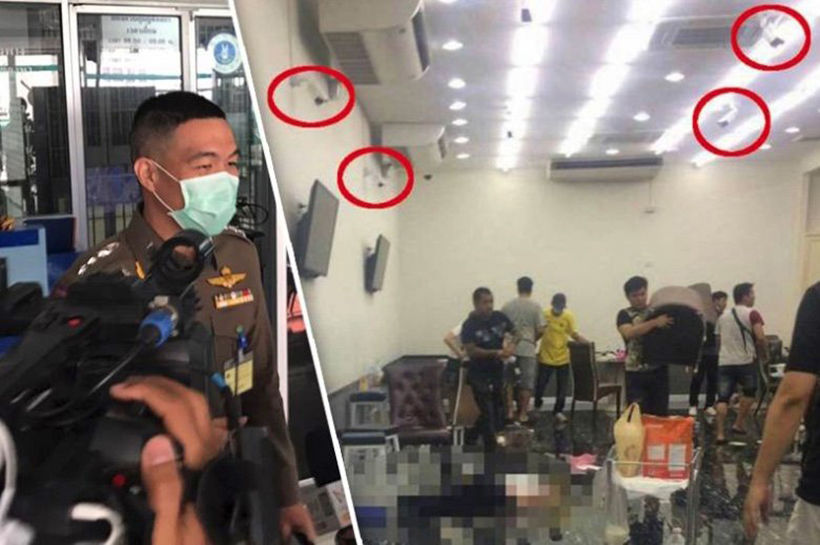 Bankok police are being questioned over their  handling the Monday’s shooting incident at an illegal gambling den in the capitol’s Thung Mahamek area, in which 4 people, including a police officer, died, and whether officers are concealing evidence. The secretary-general of the Justice Reform Institute said yesterday that police appear to be treating the shooting in the same way they treated the Red Bull heir’s hit-and-run case, alleging that forensic investigators were notified hours after the police, apparently to allow time to get rid of the evidence, equipment, including surveillance cameras. He suggested that PM Prayut Chan-o-cha pay special attention to this case and deal harshly with any rogue police.

The dead officer has been named as 32 year old Watthanaset Samniangprasert, interrogation inspector at Samae Dam police station, who is reported to have frequently gambled at the venue. The Metropolitan Police Commissioner says every single CCTV camera inside the den appears to have been removed by the time police arrived at the scene 30 minutes after the shooting. The commissioner confirmed it took police half an hour to reach the den after being told of the shooting. A blood-stained Baccarat table was reportedly found dumped behind the building.

The chairman of the House Committee on Law, Justice and Human Rights is offering a 10,000 baht reward for information about anyone who destroyed evidence at the illegal gambling den. He said today that the House committee will invite the commissioner, a senior police officer who was transferred after the incident, and former politician Chuvit Kamonvisit, to testify before the committee on August 13.

The commissioner reportedly said that the venue was not a technically a gambling den, because there was only one table on the premises, which was devoid of any gambling equipment. Chuvit wrote on his Facebook page yesterday that he doesn’t understand why the commissioner asked him to provide information about Hia Tee, the alleged operator of the gambling den.

He says the police should have questioned the 2 men who were seen in a photo, which went viral on social media, showing them climbing a ladder to dismantle CCTV cameras at the venue, while the bodies of the victims were still lying on the floor.

“Didn’t they feel ashamed at all?”

Chuwit said that those enforcing the law must ensure that all are treated equally, but it appears that they exploited their experience, knowledge and expertise to conceal and distort the facts to the benefit of their own interests and those of their people.

A day earlier he said Hia Tee is an established figure in Thailand’s illegal gambling world and well known among Thai gamblers, adding that “Rama III” gambling became very popular after casinos in neighbouring countries closed because of the Covid-19 pandemic.

“For Thai society, illegal gambling dens are not a serious offence, because they bring prosperity to the communities and provide financial support for police officers the next time they need money for their promotions or to catch thieves or drug traffickers.”