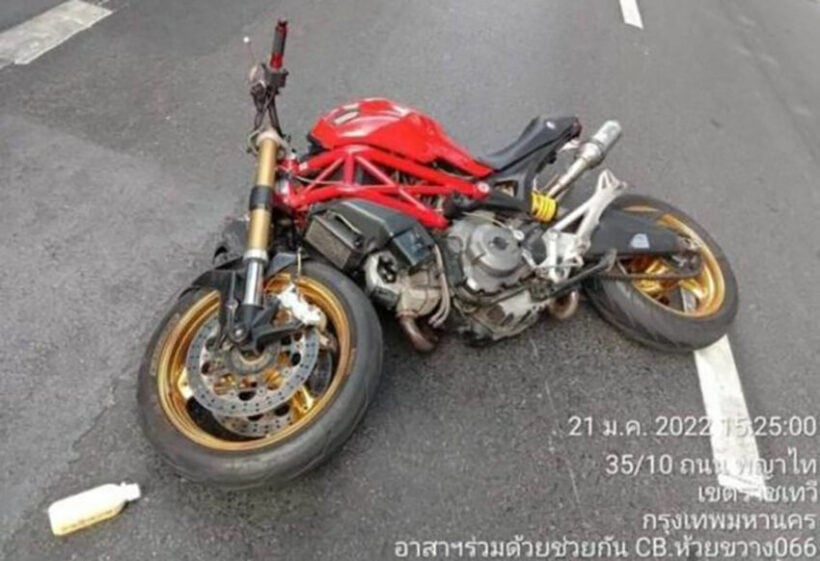 PHOTO: Taken by rescue workers at the scene

Bangkok police investigating the speed of a “big bike” involved in a fatal collision with a woman on a zebra crossing say they expect to reach a swift conclusion. Dr Waraluck Supawatjariyakul, an ophthalmologist with the Faculty of Medicine at Chulalongkorn University, died when she was struck by the Ducati bike as she used a zebra crossing on Phaya Thai Road in the capital last Friday.

Norawich Buadok, an off-duty crowd control officer, has had 7 charges filed against him, including reckless driving causing death and failing to give way to pedestrians at a zebra crossing. According to a Bangkok Post report, police are expected to submit the case to prosecutors by February 11, in order for them to proceed with criminal charges.

Meanwhile, Bovornpop Sunthornlekha, Phaya Thai police superintendent, says the bike has been taken to the Traffic Police Division for inspection. Investigators will use CCTV footage to determine the speed Norawich was doing when he struck the victim as she crossed the road.

“Experts will analyse the speed of the motorcycle that Norawich rode by reviewing the footage on CCTV. We need to wait for the results before we can confirm whether Norawich’s claim that he was driving at a speed of 80 kilometres an hour is correct.”

The Bangkok Post reports that the previous owner of the bike, a Mr Patipan, says he sold the bike legally to Norawich. He has referred 2 other witnesses to police, who will summon them for questioning.

Meanwhile, Norawich has swiftly departed the monkhood, just days after being ordained. News that the police officer had opted to enter the monkhood as a way of making merit for Dr Waraluck’s death sparked outrage among the public. Sittha Moonhong from the National Office of Buddhism says that as someone facing criminal charges, Norawich should never have entered the monkhood.

In other related news, a draft amendment to the Land Transport Act, proposed by the Royal Thai Police, has been approved by the House of Representatives and the Senate. The amendment will quadruple the fine for offences such as speeding and driving through red lights to… 4,000 baht.

Transam
2 hours ago, Geo said: This what happens when you pass your test in a car park and then let loose on the roads with no knowledge or experience. RTP don't help by ignoring offenders until there's a fatality. Laws…
oldschooler
51 minutes ago, JED1 said: Slow down for a zebra crossing and you're likely to get rear-ended Perpetual Motion & Defensive Driving. My Motorbike Habits. Never Stop at Traffic Lights. Always Left Turn, U Turn, Left Turn. So many Rear…
think-and-ask
1. few accidents, in millions of drivers = ban to drive self ? as WEF / world economy forum ( with governments ) want. - 2. other traffic system ( solutions ) exist, but are not used. great governments, because…