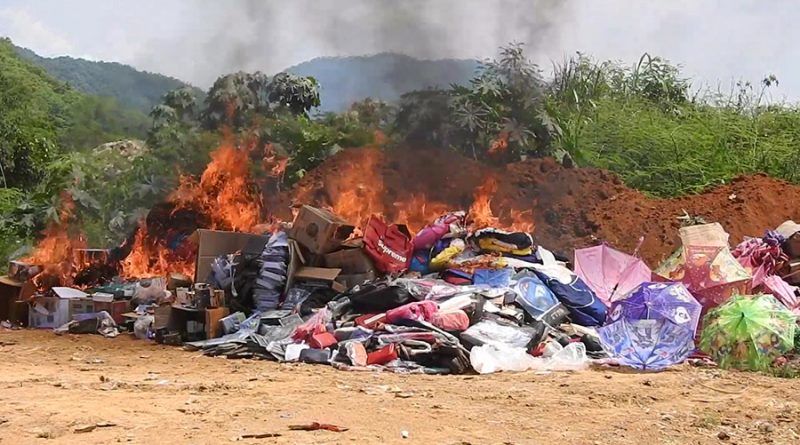 The illegal items are goods that “do not follow the customs law of Thailand”, aka. fakes and brand copies. Most of the items were seized from the Thai-Burmese Border Gate in Mae Sai.

The illegal goods were gathered and burned at the district waste disposal centre in Mae Sai. Illegal goods continue to be a big issue fo Thai authorities. Officials say that many sellers are turning to e-commerce to sell the products. Popular illegal goods sold online include fake designer bags, fake makeup, and fake perfume. The products are often sold on Instagram, Facebook and Line.

Other items that went up in smoke include illegal supplements – diet pills, medical creams, hair dye, hair products – mobile phones, pirated goods, patent infringement products, and more. One of the most popular goods seized at the border are fake designer handbags, fake jewelry, and even fake pajamas using famous brands such as Mickey Mouse.

The total value of the bonfire was of 11,098,872 baht according to Virot Yaibuathet from the Customs Department.