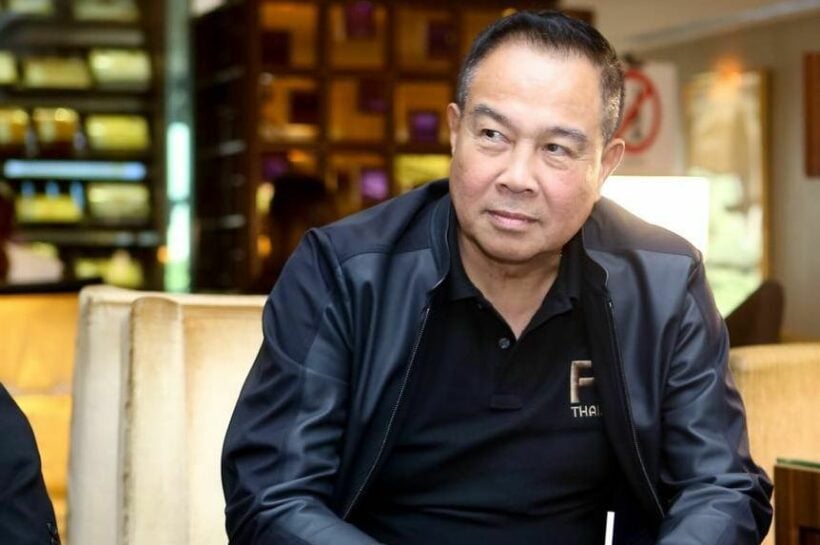 Former police chief Somyot Poompanmoung, who is also president of the Football Association of Thailand / Photo via Facebook/ FA Thailand

A former national police chief and a lawyer for the fugitive Red Bull heir, Vorayuth “Boss” Yoovidhya, are being investigated over the 2012 fatal hit-and-run case and are accused of ordering an officer to change the reported speed the billionaire was driving when sped his Ferrari through Bangkok’s Thong Lor district, running over a police officer and killing him. Reports say they allegedly told an investigation officer to change the speed from 177 kilometres per hour to just 76 kilometres per hour.

Changing the speed is said to have led to prosecutors to drop the charge of reckless driving causing death. The billionaire managed to evade justice and fled the country in 2017, ditching his private jet in Singapore.

Nation Thailand reports that a Royal Thai Police special committee will investigate the ex-police chief, Somyot Pumphanmuang, and the lawyer, Thanit Buakhiew, to determine whether they changed the report on the actual speed Boss was driving when he hit the police officer.

The Police Internal Affairs chief who chairs the committee said yesterday that the investigation officer in the hit-and-run case presented an audio clip to the committee where the then-police chief and Boss’s attorney told him to change the speed from 177 kilometres per hour to just 76.

The committee’s chairperson says the audio recording will be reviewed and officers will investigate to determine if anyone else was involved. He says the committee is expected to reach a conclusion by the November 10 deadline.

“The reported reduction in car speed was the reason why the public prosecutor decided to drop the charge of reckless driving against Vorayuth… The committee will now carefully analyse the clip, interview Pol General Somyot and Thanit, and conduct further investigations to find if there were any other individuals involved in altering the true speed of Vorayuth’s car.”

gummy
58 minutes ago, Jason said: I wonder if there is a statue of limitations If there was a "statue" at least it wouldn't run away like the Red Bull guy 😂

DoUKnowWhoIAm
27 minutes ago, gummy said: If there was a "statue" at least it wouldn't run away like the Red Bull guy 😂 But a RedBullBoy statue on Thong Lor Square would be a perfect symbol of Thailand's "limits" to go after…
MTa449
The RTP knew all of this for years . Even the initial accident/ incident reports submitted revealed the speed,drug test, and physical damage results at the scene of the crime. I say crime because obviously it's a "hit and run,DUI,…
Marc
That must have been a misunderstanding. He's definitely an honest soul. He must be! After all, he also paid back the unsecured loan of 300 million baht to the Victoria Secret Massage parlour. At least he claims so. By incidence,…
HiuMak
17 hours ago, vlad said: Rotten to the core from Top to Bottom. can't believe this case is still going on with drama. Cases you only see in a korean soap opera. How good is that. Waste of taxpayers money