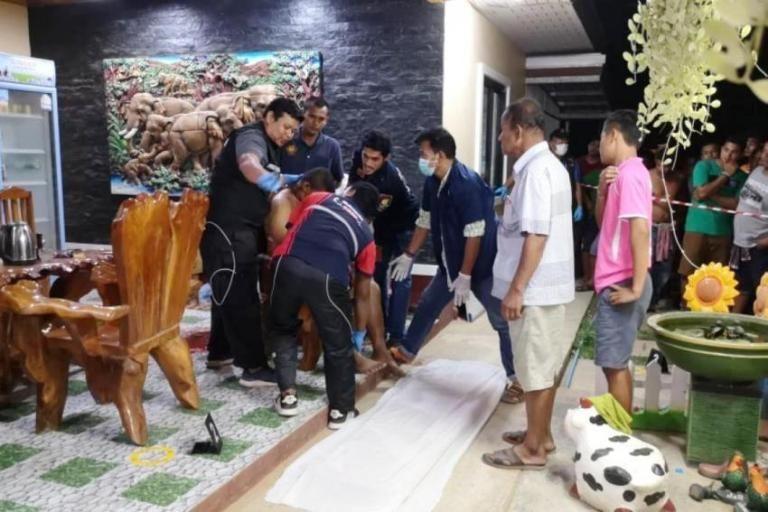 A businessman in Thailand’s southern Trang province is dead after being shot down in home Tuesday in front of his family. Police say the murder occurred about 9:35pm. Thai media report that 32 year old Suchart Kongpeng was eating watermelon with his family when hooded gunman in a white shirt broke into the house and opened fire with a 12-gauge shotgun, killing Suchart instantly. The attack was witnessed by his wife, their 12 year old son and five cousins, who were unhurt.

Police believe the motive was a business conflict. Suchart was a trader of rubber wood and oil palms. Police say the investigation is ongoing.

Elsewhere, in Thailand’s northeast, a man’s charred body was found inside a gutted pickup truck near a cassava plantation in Nakhon Ratchasima. Locals found the burned out Toyota pickup behind a municipality office.

They told police that they went to investigate a fire in a grassy field. When they arrived they found the pickup and a corpse nearby. They believed the fire spread from the vehicle to the field.

The body was later identified as 47 year old Kittisak Tamdeekin, an officer in the Thai air force.

According to the Bangkok Post a charcoal stove was found on the floor below the left front seat. Police say it appeared he suffocated himself before the vehicle caught fire. The truck was registered to Kittisak’s father.

Kittisak’s wife told police her husband was promoted to the rank of flight lieutenant in November, but he suffered from stress and had been taking anti-depressant medication.

Police are investigating to establish the actual cause of death, but have ruled out the possibility murder.