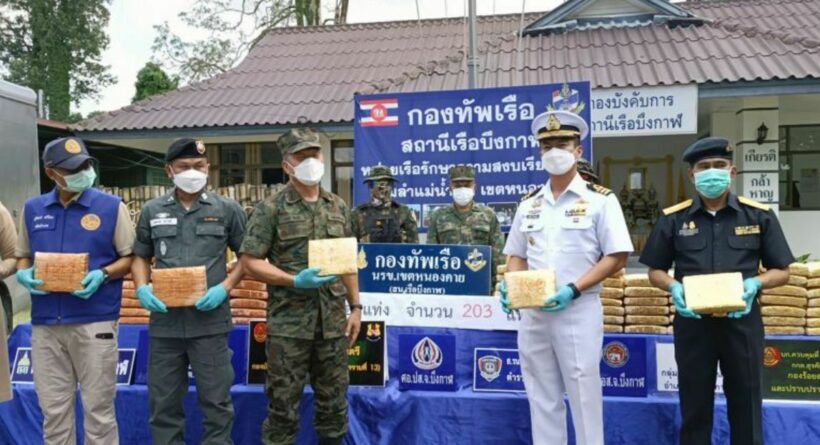 On Tuesday, police seized a huge amount of cannabis – 203 kilograms – which was smuggled into Thailand from Laos. Police arrested three Thai men in Bueng Kan province in northeast Thailand who picked up the cannabis on the border. Police don’t know what kind of punishment the men will be given, seeing as this is the first case of its kind since cannabis was decriminalised in Thailand on June 9.

Cannabis was delisted as a Category 5 narcotic on June 9, but clear rules and regulations about importing and exporting cannabis are yet to be written into legislation. Until the “Cannabis and Hemp Act” is enacted, police aren’t sure what the punishment is for smuggling marijuana into the kingdom.

On Tuesday at 5am, the Royal Thai Navy saw a silver Isuzu “delivery-type truck” acting suspiciously near the Mekong River in Bueng Kan province near the border of Laos. The navy kept watch and saw a boat come across the river from Laos, dump sacks on the Thai side of the border, and immediately return to Laos. Three Thai men emerged from the suspicious car and picked up the sacks, which is when the navy intercepted and called the police.

Police from Mueang Bueng Kan Police Station arrested the men – aged 24, 24, and 26 – on suspicion of “jointly bringing prohibited items into the kingdom without going through customs.” The huge stash of cannabis and three mobile phones were confiscated.

The men told police that they were hired to pick up the marijuana from the border and transport it to Nonthaburi province. They would be paid 10,000 baht each, they said.

The police said they didn’t know what to do with the men, seeing as marijuana is no longer a Category 5 narcotic and all prisoners put away for marijuana-related offences had been released from prison.

However, illegally importing any prohibited item is punishable by a fine of no more than four times the amount of the value of the goods and/or up to 10 years in prison according to the Customs Act of 2017. Police said the dried cannabis bricks could be sold for 3500 – 5000 baht per kilogram.

The police decided to release the men on bail for 150,000 baht each while they figure out where to go next. Without clear legislation on marijuana, the court may have a difficult time figuring out their deserved punishment.

Davelee
Ah yes we see again in Thailand... incompetent ideas, horrible execution.
robsamui
Don't you just love the way that random adverts add to the page content??
TWS60
The cop in charge of this bunch isn't the sharpest knife in the drawer, and apparently doesn't have, or know how to use, a cell phone. More amusing if it was 200kgs of sex toys, which are definitely contraband.  Can…
astro
So, is it still a "prohibited item", or have they merely dodged import taxes (if any) and VAT? Failed to present an invoice to Customs, perhaps? 😅 Quote
HiuMak
Could be an overweight issue 😀