Police officers in Nakhon Phanom (northeastern Thailand bordering Laos) are investigation a parent’s complaint filed on Sunday that two of her sons were taken away by soldiers leading to the death of one and the other being seriously injured. 11 soldiers are now under investigation over the incident.

The complaint was made by 59 year old Niwat Saisa and his wife 56 years old Pan to the That Phanom Police Station.

The parents told police that “about 8.30 pm on Friday two or three men in camouflage uniforms arrived in a pickup at their cottage in a rubber plantation near in That Phanom sub-district. They claimed to be soldiers on a drug suppression operation, and took away their two sons, 33 year old Yutthana, and 29 year old Nathapong.”

“Later that night I received a phone call at around 1 am from Yutthana’s phone but it was someone else speaking. He told me to go to That Phanom Crown Prince Hospital where their son was being treated.”

Once arriving at the hospital they were informed by doctors and nurses that their eldest son, Yutthana, had died.

Reports of the medical staff state “from Yutthana’s appearance, they believed he had been severely beaten.”

After filing their complaint, in a search for their second son, the couple went to the military operations centre at a temple in Tambon Fang Daeng, where their two sons had been detained for questioning.

At the military operation centre, they found Nathapong, where he was badly injured. They took him to That Phanom Crown Prince Hospital, where he was found to have two broken ribs and bruises all over his body.

The police have accepted the complaint for further investigation.

The body of Yutthana was sent to the Forensic Medicine Institute in Khon Kaen for an autopsy for further legal actions, the process is expected to be completed this week.

On Sunday Colonel Boonsin Phadklang, deputy commander of the Surasakmontree Task Force, paid a visit to Nathapong at the hospital.

“An investigation had been launched into the case. He promised to ensure justice for all concerned, without bias.” 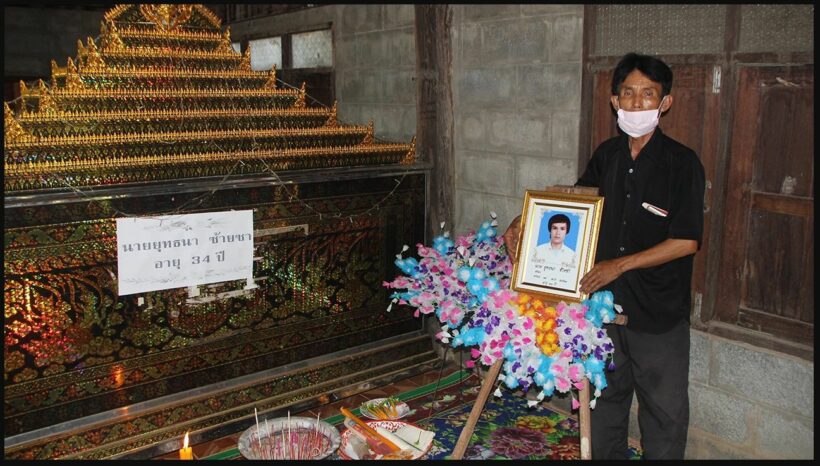 Mr Niwat says the commanding officer assured him that the soldiers will be investigated in line with military regulations, and that the 2nd Army Region has set up a panel to investigate the seven officers, pending Yutthana’s official autopsy results.

Representatives from a drug prevention and suppression centre in the Northeast on Monday gave 10,000 baht in financial assistance to Mr Niwat and asked to sponsor Yutthana’s funeral.

A group of soldiers from the Surasakmontree Task Force was sent to help with funeral preparations, and sources said that senior military officers are planning to meet with the family to discuss compensation.

Phanom police chief colonel Srinakorn Naiyawat, said today that… “the investigators had expedited the gathering of evidence will be filing charges against those responsible.”

No charges can be filed at this stage, due to the delay in results from the autopsy on Yutthana, and a report on the physical examination of Nathapong.