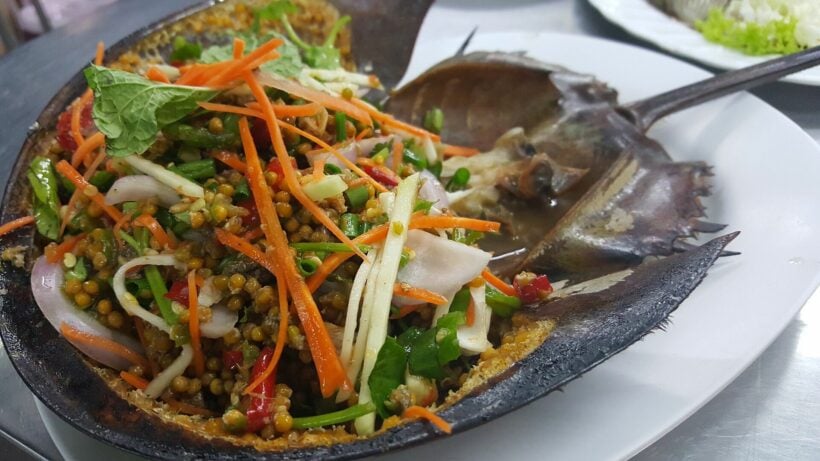 Due to its distinct and strong flavours, Thai food is one of the greatest cuisines in the world. Delicious food is everywhere in the country. From street food and night markets to food courts and restaurants, almost every corner of the country presents opportunities to sample delectable cuisine. That being said, there are some food you might want to avoid. Some are dangerous for your health, while others pose negative environmental impacts.

Some of the following cuisines are bizarre, but be sure to remain respectful when you come across them. After all, many people eat them, motivated by tradition and taste. However, they may be risky for your health, so it’s best to be cautious and avoid consuming them.

The first food to avoid in Thailand is leuat moo. From a distance, leuat moo might appear like a delicious tomato or chilli soup, but don’t be fooled. The deep red colour of this northern Thai cuisine comes from fresh pig’s blood, and not just pig’s blood; it’s raw pig’s blood. The uncooked blood is combined with herbs like holy basil and lemongrass to cleanse it and remove bad smells. It’s then mixed with various spices, including chilli flakes, cumin, salt, cilantro, green onions, and kaffir lime leaves. Sometimes, pieces of offal are added as well, such as slices of raw pig’s neck fat and raw pig’s kidney. The thick concoction is then poured over noodles.

Luu moo is mainly considered a men’s dish in northern Thailand. And although the local Thai men might have been eating the dish for a long time, it can be dangerous for foreigners to do so. Eating raw blood and offal has serious health consequences that can be fatal, such as bacterial infection. You might be feeling adventurous during your trip to Thailand, but eating raw blood is just not worth the risk. Stick to fully cooked pork dishes instead, like khao kha moo, which is braised pork leg served over rice. 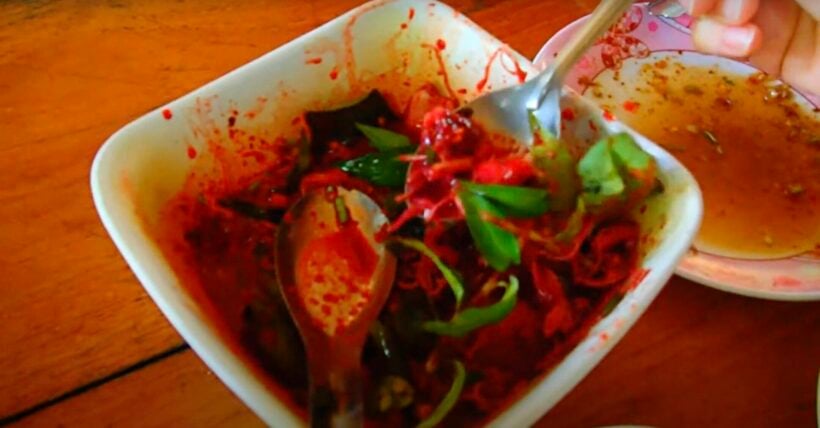 Larb is a popular dish in Thailand’s northern and northeastern regions. It’s a meat salad seasoned with fresh herbs and spices, making it spicy but incredibly tasty. This fiery dish is very versatile as it can be made with well-cooked fish, chicken, beef, duck, or buffalo. You can even find vegetarian versions made with tofu or mushrooms. Healthy and fresh, larb can be enjoyed on its own or with sticky rice.

There is, however, one variant of larb you might want to skip: larb leuat neua. This version consists of raw meat and a huge amount of raw blood. In some cases, people also add guts, bile, and bile juice to the dish. Locals usually eat larb leuat neua with shots of whisky – some believe that alcohol kills bacterias and possible parasites. We wouldn’t recommend this dish to foreigners, whether alcohol is involved or not. You’ll need a stomach of steel to consume this version of larb as upset stomachs are common for anyone not used to eating such dishes. Besides food poisoning, raw beef and blood also pose a high risk of bacterial infection we mentioned above. 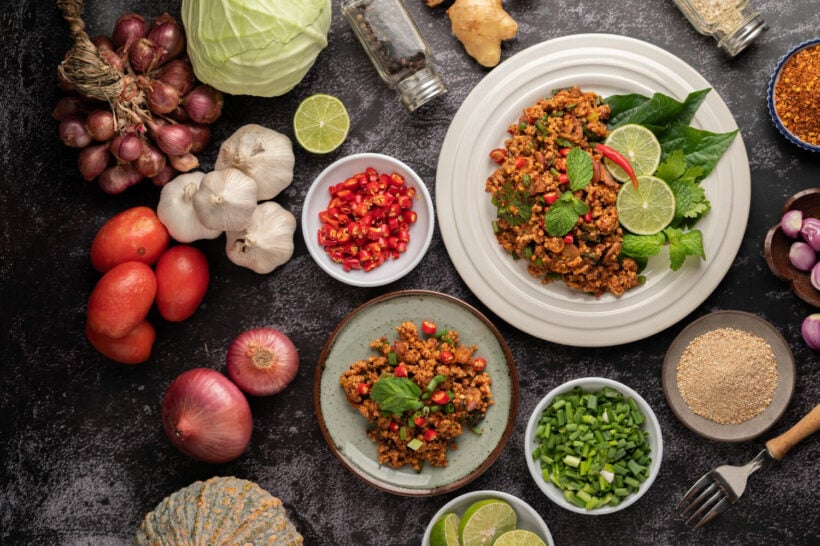 Well-cooked version of larb, which is delicious and safe to eat. PHOTO: jcomp from freepik.

Larb dib is another northeast Thai food to avoid. The salad dish is made with either raw beef or pork and seasoned with mint and various other spices. Like other dishes made with raw meat, it can contain bacteria and parasites. Therefore, it’s best to steer clear from this version of larb as well. 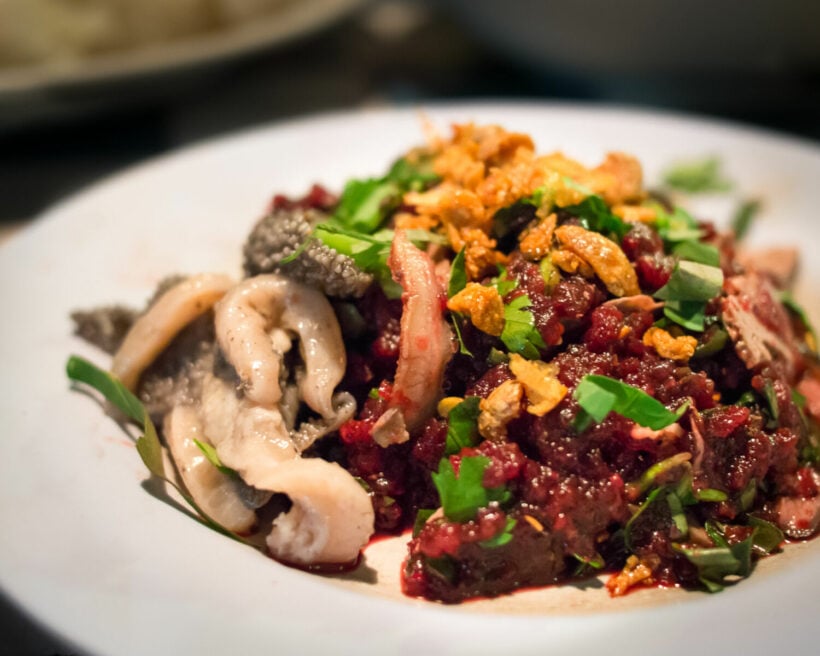 Koi pla is a salad dish from Isan, northeast Thailand. It’s made with minced raw fish mixed with lime juice, chilli, and other herbs and spices. In addition to raw fish, koi pla might also contain live red ants. For local people, koi pla is a much-loved delicacy, but the dish is believed to have carcinogenic properties. The raw fish may contain parasitic flatworms, which may cause deadly side effects like fatal liver cancer. Eating a plate of koi pla probably won’t hurt you, but it’s best to avoid it due to the risks it poses. 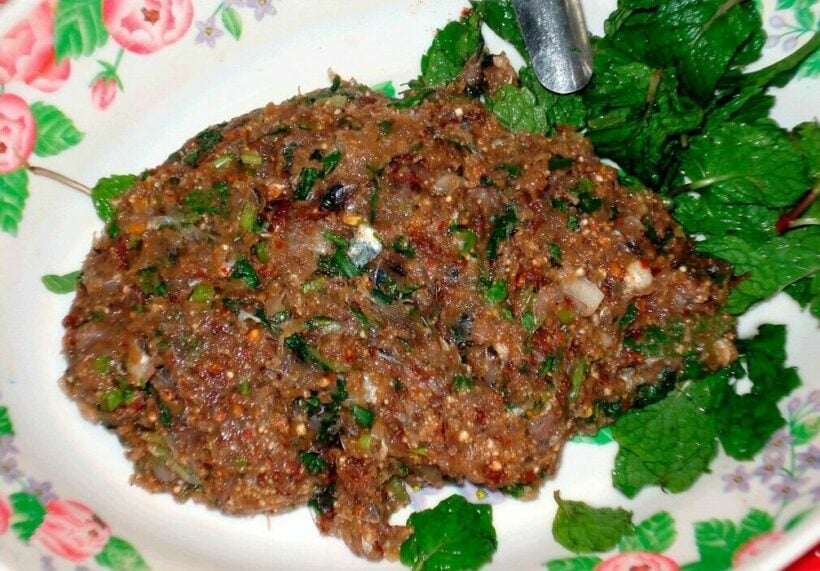 The next Thai food to avoid is Yum khai maeng da. Not only does this spicy horseshoe salad look scary, but it can also be incredibly toxic. The dish is made with horseshoe crab, an ancient creature closely related to scorpions and spiders. The only edible part of the crab is the roe or the eggs.

If you really want to try it, be sure that it’s sourced, prepared, and cooked correctly by an expert. Otherwise, just avoid it completely. 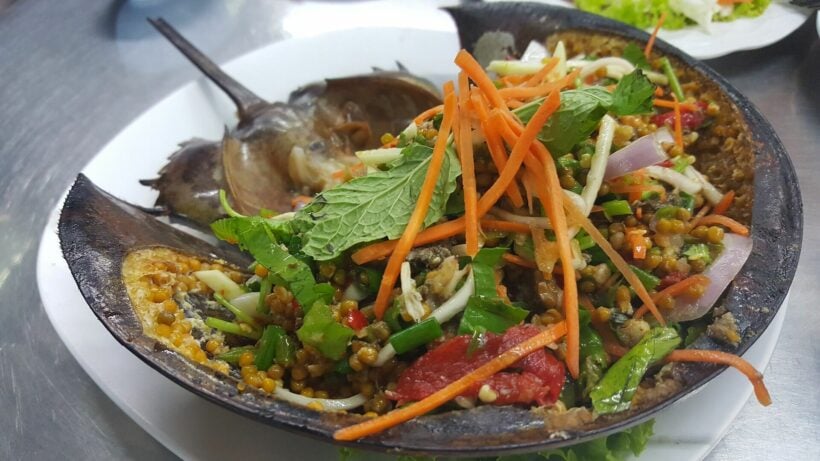 Shark fin soup is a speciality in some Thai-Chinese restaurants across Thailand. It might not be as widely available as it used to be, but certain places still include the dish in their menu. If you do come across one, it’s best that you stay away from the restaurant.

Shark fin soup is a food to avoid because of its environmental impact, rather than health risks. The consumption of shark fin soup is strongly discouraged because many shark species are now on the brink of extinction due to overfishing. Shark fins are also harvested through an unethical process called shark finning. Besides, shark fins are expensive, have low nutritional value, and are tasteless – the soup gets its flavour from the broth and other ingredients. If you’re really curious, you can always try artificial versions. 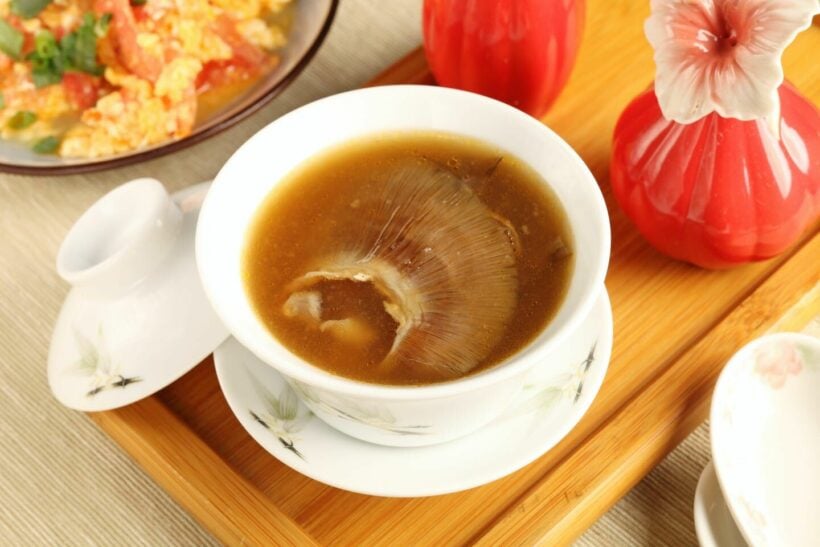 Many adventurous eaters are excited to try exotic food like fried insects in Thailand, including the crunchy deep-fried scorpions. They may look creepy, but many people find them to be surprisingly tasty. A lot of people even compare the taste of deep-fried scorpions to crispy french fries.

Deep-fried scorpions on a stick are typically safe to eat. However, you should make sure that the stinger has been removed before putting them in your mouth. Located in the tail, the stinger is full of venom, which is very dangerous if not cooked properly and swallowed.

Besides scorpions, eating other fried insects should also be done with precaution. Most of the fried insects being sold are edible, but some sellers might be irresponsible. They may not source, clean, and cook the insects properly, so it can be risky for your health. Additionally, insects may also trigger allergic reactions, particularly in people who have allergies to shellfish. This is because insects have similar proteins to crustaceans (like shrimp and crabs). So to avoid the risks, it’s best to steer clear of fried insects. 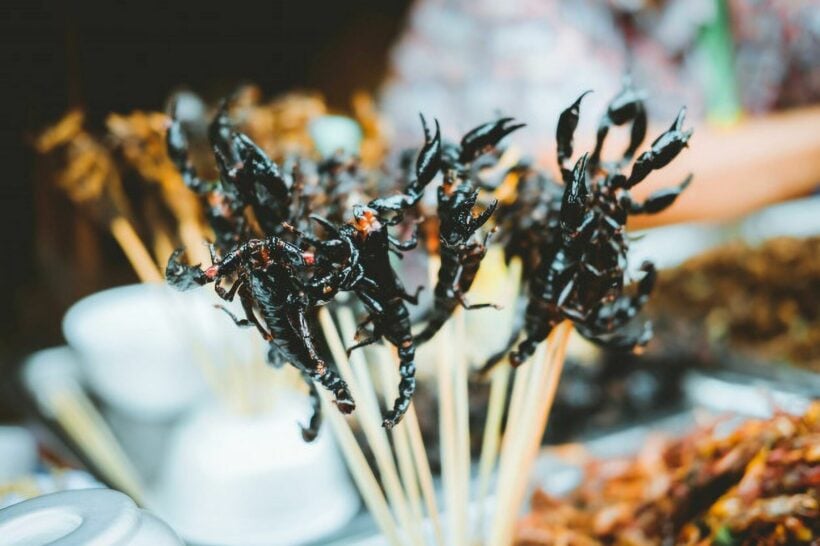 Goong ten is a Thai dish for the brave. It consists of raw freshwater shrimp seasoned with fish sauce, chilli, and lots of herbs like red onion and coriander. The star of the dish is, of course, the raw freshwater shrimp. Not only are they raw, but they’re also alive and dancing. When you spray lime juice on the live shrimp before you eat them, the shrimp will jump about in a complete frenzy – hence, the name “dancing shrimp.” The poor shrimp are likely to still jump and bounce in your mouth until you chew them. If you have a weak stomach, goog ten is definitely a food to avoid. Besides, eating raw animals is not good for your health, so it’s a great idea to stay away from the dancing shrimp. Better safe than sorry. 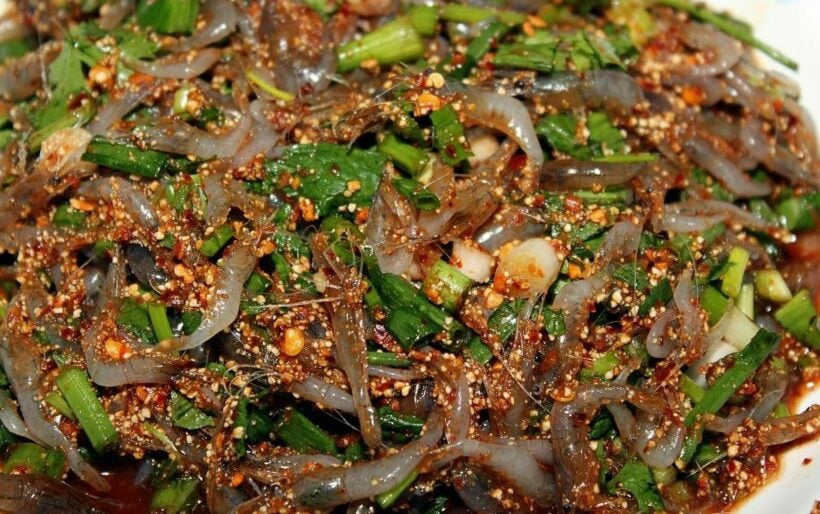 Lao khao is a Thai liquor distilled from fermented rice. It’s a drink of choice for many local Thais because it’s cheap, easy to obtain, and fast-acting. The taste of lao khao is initially sweet, but when the punch of alcohol kicks in, it burns your throat, fills your nostrils, and leaves a bitter aftertaste.

Legally made lao khao is safe to drink. However, there are many unlicensed productions of this liquor around the country. These illegal distilleries usually sell their homemade lao khao in various recycled bottles, and they’re likely to produce the drink incorrectly. Many of them may use metal stills in the distilling process, causing the liquid to react and produce a by-product of methanol. Consuming large amounts of methanol can cause blindness and even death. So if you want to try lao khao, stick to legally made ones. 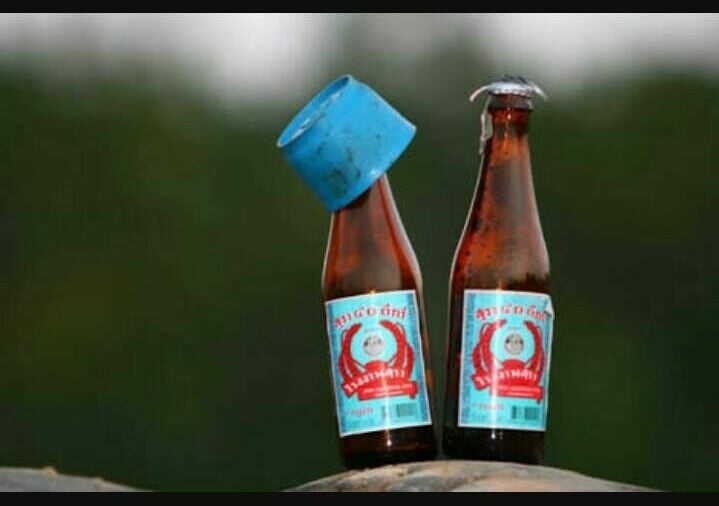 Legally made lao khao are safe to drink. PHOTO: ccxy2560.

Tap water may seem harmless compared to raw blood soup and methanol-laced liquor. Still, it’s a good idea to avoid drinking tap water in Thailand, especially if you’re outside of Bangkok. Due to a poorly maintained system, tap water in many parts of the country may contain microbes and other nasties that can make you sick. Drink only bottled water or refill your reusable bottles at filtration machines. Alternatively, you can boil water for a full five minutes to kill the bacteria. 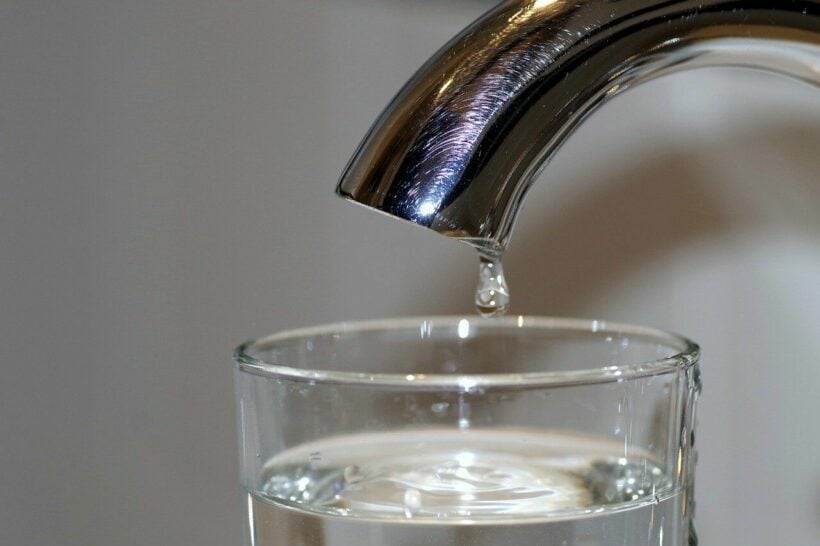 Don’t let this list of food and drinks to avoid in Thailand put you off! Thai cuisine is famous for a reason. Most of the food in the Land of Smiles is fantastic and safe to eat. However, you might want to keep an eye out for anything listed above. If you ever find yourself posing with food, here are the top 10 tips to help you recover.

For delicious Thai food you SHOULD try, check out our article on the Top Thai Food You Absolutely Need to Try.

Vince
I didn't know that about horseshoe crab. I saw a few food YouTube shoes that had horseshoe crab dishes - don't remember if they were just roe.

spicy_girl
On 1/13/2022 at 12:51 PM, Vince said: I didn't know that about horseshoe crab. I saw a few food YouTube shoes that had horseshoe crab dishes - don't remember if they were just roe.  Horseshoe crab is very popular in…

Vince
3 minutes ago, spicy_girl said: Horseshoe crab is very popular in Chumphon, always in the fresh markets in Thung wa laen area. The article says it's poisonous if prepared improperly. Are they cooked?

KaptainRob
On 1/16/2022 at 12:19 PM, Vince said: The article says it's poisonous if prepared improperly. Are they cooked?  Certain parts of all crabs can be toxic due their environment and I believe it may be the gills of horseshoe crabs…
HiuMak
I did the horseshoe crab twice and still alive