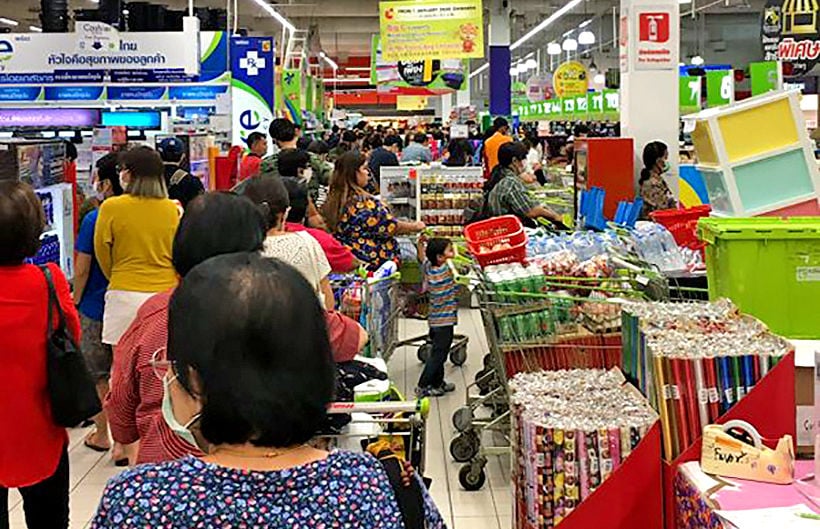 Retailers are insisting that supplies of new stock have been unaffected as local residents, afraid of a Cornonavirus-prompted lockdown, rush to retailers to restock on essential goods – drinking water, rice, canned food, semi-instant noodles, sugar and toilet paper have been found to be in short supply in various department stores, supermarkets and retail stores, as people start hoarding supplies.

Executive Director of the Thai Retailer Association, Chatrchai Tuongratanaphan, says “basic goods are not short in supply and, above all, manufactures can still boost production capacity to cope with a higher demand.”

Mr Chatrchai was responding to reports and pictures of the long queues in super-markets around the country.

“Many social media users says the stockpiling had been prompted by rumours that if Thailand reaches Stage 3 epidemic status, the government might impose significant restrictions of the movement of people.”

Stage 3 is when there is widespread community transmission of the virus. Read about Thailand preparing for Stage 3 HERE.

Netizens have been comparing the scenes in supermarkets over the weekend to those of the Thai floods of 2011 when basic goods and food disappeared from shelves.

Mr Chatrchai says the present situation is greatly different this time around.

“There will be no shortages of basic goods. At that time, all transport routes were flooded so manufacturers could not transport their goods.”

According to Thansettakij newspaper, a salesman at a trade shop in Bangkok’s Lat Phrao district said that several products were sold out and stocks needed to be replenished.

Around Phuket on the weekend all supermarkets reported doing brisk business. In particular Makro stores were sold out in some lines but are assuring customers that there is still plenty of stocks available.

“We are not at a stage where we need to stockpile food.”

Be informed, be aware. Prevention and precautions in a Covid-19 world.