The UK and EU are going into a mild travel panic as borders start to close again and restrictions re-imposed. Last night France imposed a ban on travel to and from the country, except for “travel for compelling reasons”. The only “compelling” exemptions are for French and European travellers returning to France, or UK passengers heading in the other direction.

Back at home, governments are mulling other domestic restrictions.

Additionally, all travellers arriving in France from the UK will need to quarantine for at least 7 days. But this could be just 2 days “if they provide a negative test after arriving in the country”.

French officials are justifying the new restrictions because they’re “faced with the extremely rapid spread of the Omicron variant in the UK”. Meanwhile French health officials are ramping up booster vaccines for their citizens as an additional defence.

French President Emmanuel Macron has accused British PM Boris Johnson of “failing to keep his word on Brexit… the problem with the British government is that it does not do what it says”.

Last night’s deadline, midnight French time, has caused havoc for a number of events as well as thousands of travellers who have had their holiday and travel plans scuppered. This weekend was European Champions Cup and Challenge Cup rugby matches between clubs from the UK and France. For now, they’ve been postponed.

French PM Jean Castex yesterday reported that “the Omicron variant is spreading at lightning speed in Europe and will likely become dominant in France by the start of next year”. He was speaking just hours before the country imposed strict new travel restrictions on those coming from the UK. The UK has so far been the hardest hit in the European region, with nearly 15,000 confirmed Omicron cases out of a total of 93,045 new Covid infections reported yesterday.

France, Germany, Spain, Italy and Russia all figure in the top 10 of daily new cases yesterday. 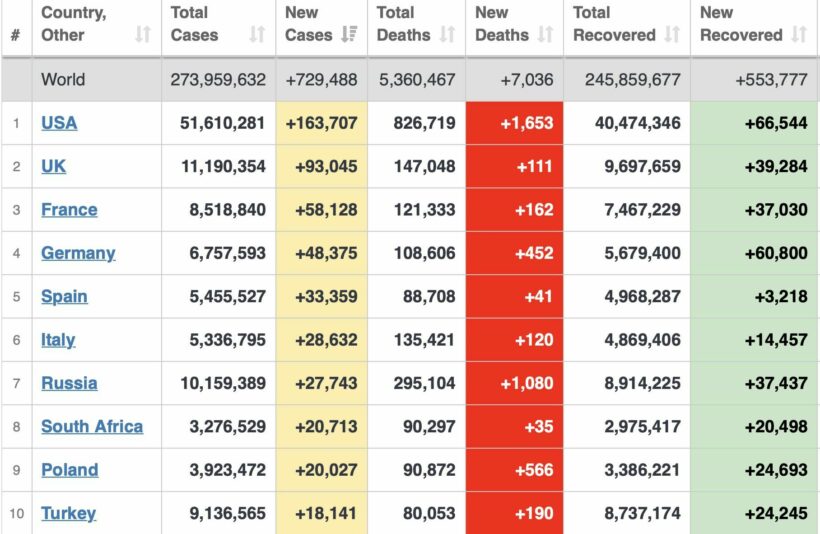 Additional restrictions were also announced in Germany, Ireland and the Netherlands yesterday as Euro governments try to contain the spread of the virulent new Covid strain, named Omicron by the WHO three weeks ago following first confirmed reports in South Africa during November.

In Germany, which reported 48,375 new infections yesterday, the country’s Health Minister Karl Lauterbach said “that the country must prepare for a challenge that we have not yet had in this form”.

In Ireland, where a third of new cases have been detected as the new variant, health officials say they were expecting “to see infections at a rate that is far in excess of anything we have seen to date”.

In the Netherlands, Dutch health experts have called on the country to go into a “strict” lockdown. Netherland’s PM Mark Rutte says Omicron “could be the country’s dominant strain by “as early as January”.

Back in the UK, businesses are voluntarily shutting their doors again, partly to get ahead of the curve and partly because people are limiting their shopping, or cancelling reservations over the new surge of Covid.

Ferhat Dirik, manager of east London’s Mangal 2 restaurant, told CNN that he’d decided to shut a week earlier than planned… “because of lost bookings and the general uncertainty in the air.”

The closures, for real or imagined threats, pose a major new threat to the UK economy and a headache for government, just as they’re heading for the busiest time of the year.

The UK’s Chief Medical Officer, Chris Whitty has advised people “not to mix with others unless absolutely necessary”. And the UK finance minister Rishi Sunak cut short a trip to the US “because of the deteriorating situation back home”.