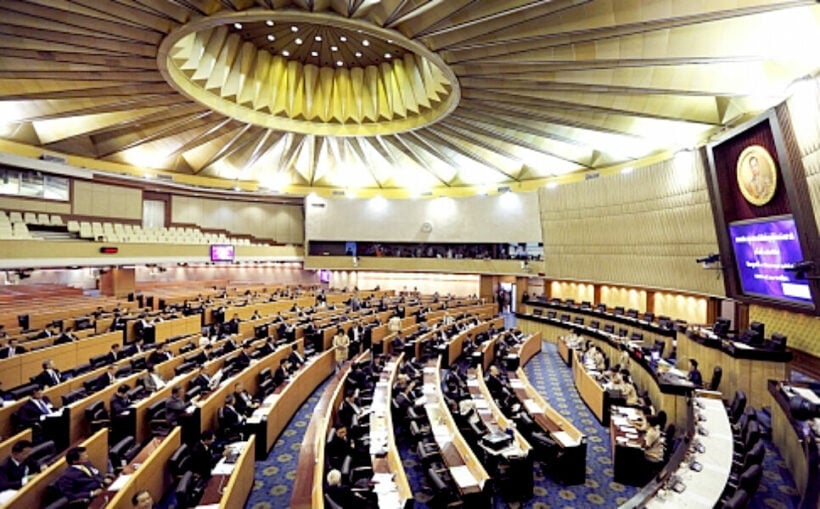 PHOTO: The Thai Parliament was exposed to Covid-19 this week when one senator was infected. (via constitutionnet.org)

After a week of important meetings with most of Parliament in attendance, Senator Lieutenant General Lertrit Wechsawan has tested positive for Covid-19. The 74 year old member of parliament was in attendance for the parliamentary proceedings regarding government referendum voting and later confirmed the diagnosis.

The senator’s timeline includes a lunch meeting with 2 other senators, putting them at risk of Covid-19 exposure. 71 year old Piyaphan Nimmanhaemin, a senator since 2019 and senator General Pairote Panichsamai joined the infected Senator Lertrit for that lunch.

After leaving meetings early due to not feeling well, the senator decided to get tested for Covid-19, going to Phramongkut Hospital for testing. The results came back positive and he was admitted into the same hospital for treatment.

The hospital then joined the Department of Public Health in requesting that anyone who came in contact with Senator Lertrit to submit to their own Covid-19 testing in order to identify and curb any potential outbreak as quickly as possible. They also ask that those who may have been exposed to the senator to self-isolate into they are confirmed to be negative for Covid-19.

AdvocatusDiaboli
Imagine if he was, that would put the cat amongst the sandbox pigeons. They may change required sandbox hotel requirement from SHA+ to ACQ for 14 days, which will be put in place on the 30th June.
tker
6 hours ago, AlexPTY said: I would be really surprised to hear that he was not vaccinated    Perhaps with some SinoXXX vaccine?
TobyAndrews
Any chance of the Thai parliament being put into quarantine as a Burmese work camp might? No chance. Thais are the scum of the earth. Keep them out of the West.
Blogosopher
Even the "smart" ones have no common sense. This is the root, lack of common sense in the Thai population, of the Covid spread, not government policies. And believe me, I'm no supporter of the current government but I know…