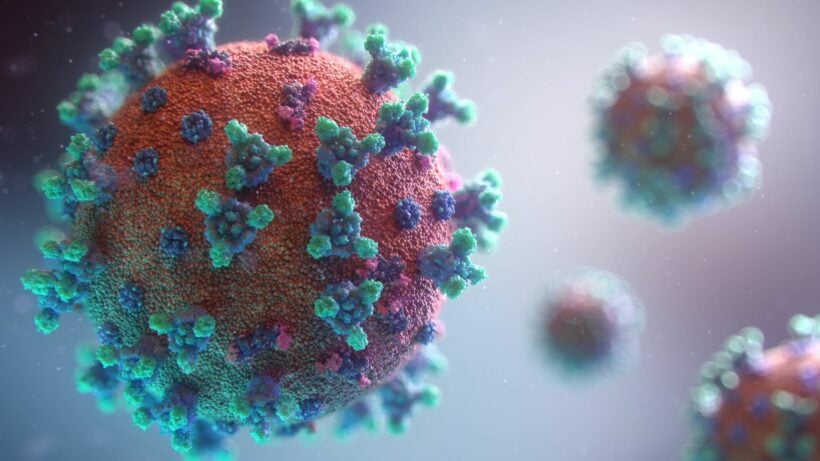 An illustration of coronaviruses. Credit | Unsplash

Chinese researchers in Wuhan have sounded the alarm on a species of known bat coronavirus that could potentially be 3 times more fatal than Covid-19, the Thai Public Health Commission’s Vice Chairman Chalermchai Boonyaleephan stated yesterday.

If the virus were to mutate and make its way to human populations, it could turn into “Covid-22” and eventually be crowned “MERS-CoV-2,” Boonyaleephan said. There is a possibility that the symptoms would be “3 times more lethal” than Covid-19, considering the more than 30% death rate of its cousin MERS. “Covid-22 would kill 17 million people, compared to Covid-19, which has killed 5.67 million.”

Researchers at Wuhan University published their paper last week on the preprint site bioRxiv, where they identify a virus in South African bats that could become a risk to people — if it continues to mutate further.

The report states that although the virus could penetrate human cells using the ACE2 receptor, the way Covid-19 does, it is currently unable to do so efficiently.

“Close relatives of MERS-CoV in bats use ACE2 as their functional receptors,” they wrote. “NeoCoV is only one mutation away from becoming dangerous for humans.”

They said the virus is similar 2012’s MERS, or Middle East respiratory syndrome, that first appeared in Saudi Arabia. MERS had a death rate of around 34%. The study has yet to be peer reviewed.

Importantly, researchers found that antibodies for Covid-19 and MERS were unable to “cross neutralise” NeoCoV infections, rendering useless the antibodies gained from current vaccines and past infections of its coronavirus siblings.

“Our study demonstrates the first case of ACE2 usage in MERS-related viruses, shedding light on a potential bio-safety threat of the human emergence of an ACE2 using “MERS-CoV-2” with both high fatality and transmission rate.”

The World Health Organisation stated last Friday that NeoCoV needs to be “studied further and immediately”, in order to definitively answers whether it will ever infect people in the future.

Editor’s Note: An earlier version of this article displayed a paraphrase as a direct quotation and incorrectly stated the virus could be 30% deadlier than Covid-19. The article has been updated accordingly.

Lyp14 [ctxa]
13 minutes ago, Rookiescot said: Yet. Then don't come here trying to be a know-it-all. For as long as they don't have a UN seat, they won't be a country.

Poolie
15 minutes ago, Bluesofa said: It was the UN's decision purely because China opposed it, saying that only sovereign states can enjoy membership. It's political by China as they refuse to accept Taiwan as a sovereign country. Oh it was…

KaptainRob
Thread locked as it has wandered well and truly off topic. You can all go bat crazy mad talking about Scotland, Taiwan and elsewhere in a General discussion forum if you wish.