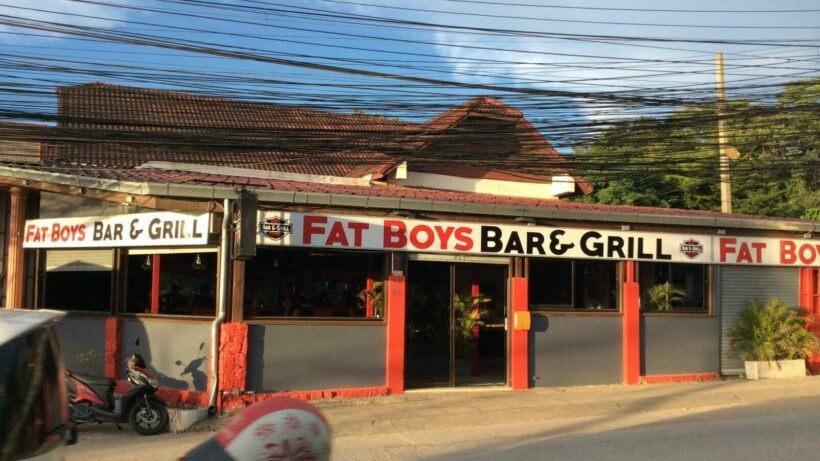 There’s no glitch in the Matrix, it’s just regular Déjà vu as 12 people were arrested last night at an underground room as part of a Pattaya bar raid. The 12 suspects were allegedly drinking alcohol, which Pattaya police remind people is a violation of the current emergency decree. The police also say that the dozen suspects were also violating other rules/laws like the communicable disease act and limits on gathering.

The Nongprue City Police raided the “Fat Boys Bar and Grill” last night, around 8 pm. Currently, in places like Pattaya, no more than 1 person can drink alcohol in a “group”.

Colonel Chitdaecha Songhong who led the raid, says the police had received complaints from concerned citizens that foreigners and Thais were “secretly” gathering and drinking alcohol in an underground section of the bar. He adds that the complainants feared the underground drinkers could spread Covid and that by reporting the “incident” they were in fact protecting the community.

Chitdaecha adds that the rules are not intended to punish people, but rather to protect the community. Further, that if everyone follows the rules everything can get back to normal faster.

It was not stated if the bar proprietors would also face legal action.

Earlier, the Thaiger reported that over 66 people were arrested at a beach bar in Pattaya.

Last night, a couple was arrested for allegedly live streaming themselves while they broke curfew. Meanwhile, Phuket has added new layers of restrictions and Thailand logged over 14,000 new Covid infections, today. Buzzkill
There’s no glitch in the Matrix, it’s just regular Déjà vu as 12 people were arrested last night at an underground room as part of a Pattaya bar raid. The 12 suspects were allegedly drinking alcohol, which Pattaya police…

Poolie
MM The Snitch reported to the police as they were concerned about the " Incident " and were protecting the Enviroment. lol. Its all very well publicizing these idiots but we never here what Sentance they received. Fined Bht7800…

Poolie
Well, it would be nice if some things opened. Like all the businesses.  And if they could keep all the Chinese tour busses out, that would be nice. A lot of my friends have been feeling the pinch of…

Poolie
i cant believe the ninnies on this chat . eat your covid sandwich and shut up this is so much crap . Bunch of pansies. Yur scared of covid it hardly kills anyone the shut down will kill far…
Primo
On 7/28/2021 at 10:26 PM, Poolie said: Fined Bht7800 as reported on Fab Radio. That's all the penalty that the Thais and foreigner are receiving? For Thais it might hit them hard since times are tough. But for the foreigners…