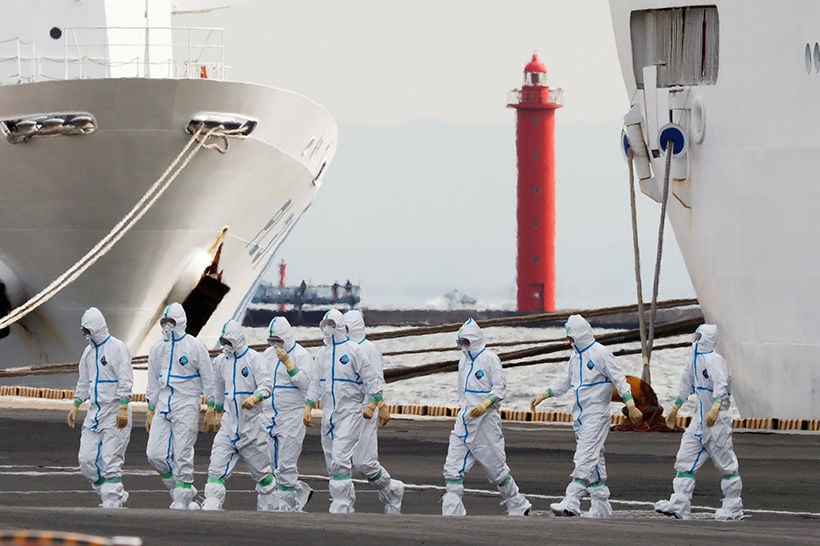 PHOTO: The new cases raise the number of confirmed infections on board the ship to at least 61 - AFP

41 more cases of the Novel Coronavirus, or 2019nCoV, have been found on the cruise ship Diamond Princess, currently quarantined in Japan’s Yokohama Harbour, bringing the total to 61. The virus has killed hundreds of people, nearly all in China, and infected more than 30,000 on the Chinese mainland.

The ship was quarantined after a former passenger, who disembarked in Hong Kong in January, tested positive for the virus. Japanese authorities have so far tested 273 people on board, and Japan’s health minister Katsunobu Kato confirmed today that more will now be tested.

“The results of the remaining 171 tests came out and 41 tested positive. Today they will be sent to hospitals in several prefectures, and we are now preparing for that. In total, out of 273 specimens, 61 tested positive.”

The new cases comprise 21 Japanese, as well as Americans, Canadians, Australians, an Argentine and a Briton. There were more than 3,700 passengers and crew onboard the ship arrived off Japan’s coast Monday evening. It docked in Yokohama on Thursday to resupply for a quarantine that could last until February 19.

The 20 people who already diagnosed with the virus have been removed from the vessel, including one who is in serious condition, according to a health ministry official.

Testing was initially carried out only on those who showed symptoms or had come into close contact with the former passenger diagnosed with the virus. But Kato confirmed testing will now be expanded.

“Authorities will test those who are susceptible to illness, including elderly people and those with other ailments, as well as those who had close contact with the people newly diagnosed with the virus.”

There were no immediate details on how many people meet those criteria or when the testing will occur.

Japan has already reported at least 25 cases of Coronavirus aside from the infections on board the ship, and evacuated hundreds of citizens from Wuhan, the Chinese city where the virus emerged. A fourth evacuation flight carrying both Japanese citizens and non-Japanese spouses and those with other ties to the country arrived on Friday morning.

Japanese authorities say the ship’s quarantine could last another 12 days, with passengers required to stay inside their cabins to prevent new infections.

A second cruise ship carrying a passenger suspected of infection with coronavirus will not be allowed to dock in southern Japan, the government said today.

Coronavirus UPDATE – 31,481 infections world-wide, the search for a cure