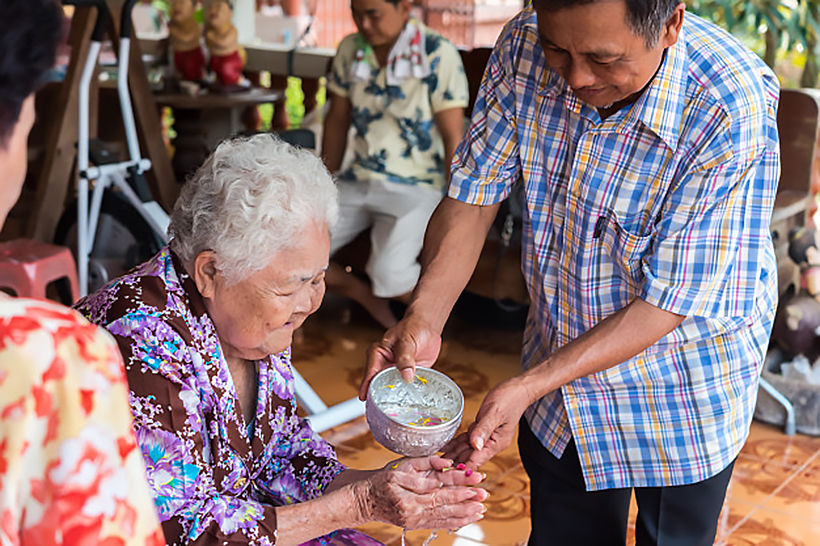 Songkran, the traditional Thai New Year festival, is typically a week long celebration including a mass exodus to the provinces as dutiful children visit their homes bringing best wishes to their elders. This year’s celebrations have been postponed indefinitely to prevent that exodus, for fear of spreading the Covid-19 coronavirus to the provinces and among the elderly.

Now the the Department of Health is asking children to avoid visiting their parents and elderly family members during the Songkran period.

“We want to make sure that during Songkran, senior citizens are safe from Covid-19 transmission. So young people, who represent the country’s largest disease carrier group, should participate in the “Save Parents” campaign, keeping them free from the deadly disease.”

The campaign was launched this week by Dr Panpimol Wipulakorn, secretary-general of the Department of Health, to coincide with the Songkran Festival, which usually runs from the end of this week until next (the actual Thai New Year day is April 13 each year).

Although the government has cancelled national holidays and water splashing events, Panpimol says some people are still expected to try to return home and visit their parents, despite recently imposed travel restrictions, adding some might even defy the water splashing ban.

“Those who live with elderly family members should avoid physical contact, especially hugging and must also avoid splashing water on them.”