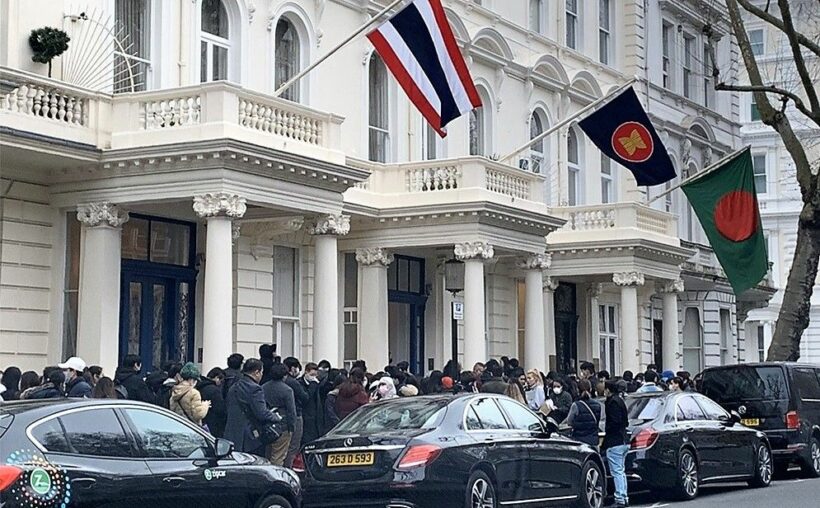 PHOTO: Queues outside the Thai Embassy in London in March - Sirada K Ning/Facebook

A Thai doctor based in the UK is appealing to the Thai government to allow Thai citizens currently stranded in the country to return home. Ekaphum Chamnanrabiabkij is a practising doctor in Bicester, in the English county of Oxfordshire, and has become something of a spokesman for his stranded compatriots who find themselves locked out of Thailand during the Covid-19 pandemic.

Ekaphum says many of the people he sees are suffering from serious health and financial problems. Others are being forced to miss family funerals. Currently, there are reportedly around 3,000 Thai nationals stuck in the UK. Although the Thai government says it is repatriating its citizens, Ekaphum says much of the required documentation, such as medical certificates, is proving impossible to get, and he criticises the Thai government for ignoring the plight of its citizens.

“It’s embarrassing if the whole world knows about this. How can we be so proud that our country has zero cases of Covid when we leave our brothers and sisters in a foreign country? From a humanitarian standpoint, it’s completely wrong.”

Some of the people Ekaphum has spoken to include a breast cancer patient who has missed five months of treatment, a suicidal woman who is off the medication she was taking for mental health problems, and many with other serious health conditions who have missed hospital appointments in Thailand. Many Thai nationals are desperate to return for other reasons. Some have family members who have died, and one woman is anxious to escape a domestic violence situation.

Thailand closed its borders in March and since then, around 1,600 Thais have repatriated, but Ekaphum says there are nowhere near enough repatriation flights, as around 3,400 Thais in the UK have registered to return. He adds that the actual number may be as high as 4,000 as not all will have registered. He says priority must be given to those with urgent needs.

“There are so many Thais in the UK, so 1,600 people is a very, very small amount. Who deserves the seat on the plane to go back more, a suicidal patient or a fit, 24 year old student? I don’t think it’s fair to just queue up people and call them up in order. We’re not robots. People are shaking, crying, and asking me to help them. “

Ekaphum says Thais on tourist visas cannot afford healthcare or medication in the UK. Others have lost money after booking tickets home on flights that ended up being cancelled. He says one family paid 240,000 baht for 4 seats on a flight that was subsequently cancelled and now need to wait 6 months for a refund. Many Thai nationals only planned to be in the UK for a short time and are running out of money.