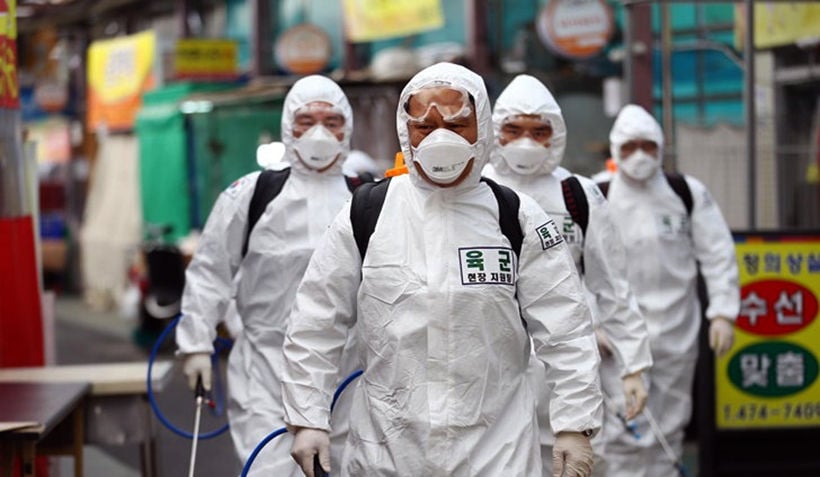 Italy and Spain have also had similar daily spikes in new cases and deaths as Europe struggles to ‘flatten the curve’ of the steep rise in cases. Here are the stats from the top 10 countries in the world (the statistics are only an indication and rely on full reporting and vary because of regional testing). worldometers.com Here are some snippets of coronavirus news from around the world…

In Thailand, the Department of Disease Control of the Ministry of Public Health confirmed 127 new Covid-19 coronavirus cases in its daily press briefing yesterday. 1 more death was also reported, bringing the national total to 10 since the outbreak began in January. The latest number raises the total number of confirmed infections in Thailand to 1,651.

Meanwhile the Thai government is reported to be mulling the following possible additional preventative measures although NONE of these have been actioned at this stage.

Bangkok’s city hall has dismissed as false reports that it is announcing a full lockdown to keep city residents in their home. Pol Capt Pongsakorn Kwanmuang from the Bangkok Metropolitan Authority says that the rumours of a full lockdown could have been triggered by mixed messages from a meeting of BMA executives on Monday. He says that no further measures have been tabled or proposed at this time.

“The BMA executives didn’t discuss any further lockdown measures at the meeting.”

A 13 year old boy in London is thought to be Britain’s youngest known victim of the Covid-19 virus. The teenager died at the King’s College Hospital in Camberwell, south London. The hospital statement expressed its “thoughts and condolences” to the boy’s family.

“Sadly, a 13 year old boy who tested positive for Covid-19 has passed away, and our thoughts and condolences are with the family at this time. The death has been referred to the Coroner and no further comment will be made.”

The Covid-19 pandemic is “far from over” in Asia, according to a regional spokesperson for the World Health Organisation, Tarik Jasarevic.

“China has slowed transmission of the virus and passed one peak in the outbreak. The challenge now is to prevent a resurgence of new cases. This is going to be a long-term battle.”

China and South Korea have both delayed key national college entrance exams over growing fears of a second wave of coronavirus cases, underlining the difficulties countries face in returning to normal life even after successfully reining in infections.

South Korea, which was one of the first countries outside China to show a breakout of coronavirus cases, has now “flattened the curve” of new cases. The country how adds an average of 100 new cases a day. South Korea has postponed its annual college entrance exam and cancelled the planned reopening of schools. There are still groups of cases in churches, hospitals and nursing homes flaring up with other cases coming across the country’s borders, according to officials.

Police in the UK have come under fire for some over zealous reaction to the requests for social distancing in Britain – drones filming couples as they take their dogs for a walk through country areas, drivers sent to court after being spotted on the road, person warned publicly on a Twitter feed for dropping in on his father’s 78th birthday. Police have also put black dye in a picturesque lake at Harpur Hill in Buxton to stop people going there to take photos.

There is growing concern in the UK around draconian tactics and alleged “overreach” by police forces since the PM Boris Johnson (who remains confined in his home after testing positive last Friday) announced lockdown measures on March 23.

America’s top scientists battling the coronavirus have estimated that Covid-19 could be responsible for killing 100,000 to 240,000 US residents, despite social distancing measures that have closed schools, banned large gatherings, limited travel and forced people to stay at home.

Dr. Anthony S. Fauci, the country’s leading infectious disease expert, and Dr. Deborah L. Birx, coordinating the coronavirus response on behalf of the US government, presented the grim projections at a White House briefing yesterday. They described the projections as “our real number” but pledged to do everything possible to reduce it as the US President solemnly watched on.

Dr. Fauci and Dr. Birx say the number of deaths could be much higher “if Americans did not follow the strict guidelines vital to keeping the virus from spreading”. The models shown at the over-2-hour media conference showed that more than 2.2 million people could have died in the US if nothing were done to try to stop the spread of the virus. President Trump echoed that message saying that now is not the time to relax.

The Malaysia government’s orders to stay-at-home has prevented major daily spikes in coronavirus infections, according to optimistic government projections yesterday. But the World Bank continues to warn that the trade-reliant country’s economy will shrink this year for the first time in more than a decade.

Malaysia recorded 140 new coronavirus cases and six deaths on Tuesday, taking the total number of infections to 2,766 with 43 fatalities. Nearly half of its infections are linked to a religious gathering held late last month.

The country, reporting the highest number of cases in south east Asia, has imposed month-long restrictions on travel and non-essential business that run until at least Apr 14.

Thai food conglomerate Charoen Pokphand Foods says it plans to offer heavily discounted ready-to-eat meals for those facing financial difficulties as a result of the economic fallout of Covid-19.

CEO Prasit Boondoungprasert says a million meals will be distributed to Fresh Mart shops around the country and will cost just 20 baht. There will be a choice of dishes on offer and customers who purchase 5 meals at a time using the TrueWallet app will get an additional 5 baht discount .

Nation Thailand reports that CPF is also delivering free food to impoverished homes in Bangkok on Tuesdays, Thursdays and Saturdays and distributing vouchers to village healthcare volunteers around the country so they can purchase items at discounted prices at Fresh Mart branches nationwide.

Charoen Pokphand Foods Public Company Limited a company of the Charoen Pokphand Group, is an agro-industrial and food conglomerate headquartered in Thailand. Approximately 64% of its revenue came from overseas operations, with 30% from its home market of Thailand, and 6% from export operations. It recently acquired Bellisio Foods, one of the largest frozen food suppliers in the United States, for US$1 billion, as well as Westbridge Foods, a major British poultry producer with turnover of over £340 Million.

The company’s core businesses are livestock and aquaculture. Livestock operations include chicken broilers, chicken layers, ducks, and swine. In aquaculture, the two main marine animals are shrimp and fish – Wikipedia.

Students to wear mask, get temperature checked at school

Students will need to wear a face mask and have their temperature checked before entering school. The Public Health and Education ministries recently put restrictions in place for the start of school set for July 1, according to Nation Thailand.

Schools are categorised as a high risk area for the potential spread of the coronavirus. In general, cold and flu bugs spread fast in schools. Now, with a more serious pandemic, teachers and school officials will need to work extra hard to keep students healthy and somehow find a way to make sure students are social distancing.

“Hand sanitising checkpoints are now required throughout school grounds. Door knobs, toilets and playgrounds must be cleaned often. If a student has symptoms, the school must inform public health authorities.”

Some advisors are saying schools should wait longer to open, while others say children are less likely to show symptoms of the virus. The start date has already been pushed back and students are looking at a so-called “mega term” with little to no holiday break to make up for lost time until next year.

“If they do reopen in July, class sizes must be reduced to make sure students are seated a safe distance apart. It’s unclear how schools that are at capacity will lower class sizes.”

Distance-learning classes have launched online, but the system has had a few early bugs, with many Thais without internet or some unable to access the classes.

The Covid-19 pandemic has seen many heartwarming outpourings of charity, with a lot of businesses, both Thai and foreign, handing out free meals and essential goods to those affected by the crisis. The southern province of Phuket is no exception, with many pubs and restaurants joining in. But people in the island’s Bang Tao district might be surprised to learn that their meals were prepared not only by a career chef, but a student and disciple of legendary Chef Paul Bocuse.

Pablo Blattman, owner of Dedos restaurant, and his crew hand out more than 160 free meals a day and have now donated well over around 2,500 meals to the community. Blattmann, born and raised in La Paz, Bolivia, by a Swiss mother and Bolivian father, says the two cultures gave him insight in different universes of flavours.

At a time when most neighbouring restaurants are shuttered (or crippled by the ban on alcohol sales), Blattman says he wants to “give something back to the community which has given me so much.”

Although the crisis means Blattman must temporarily close the restaurant (again) at the end of May, he intends to go on giving back to the community.

“Our commitment to our community is still here, and we will keep our efforts up, but in a different way: dry food, going to workers’ camps, going upcountry… be assured that every penny donated will reach people in need. We are keeping a strict accounting on all our expenses and any donor is welcome to check it.”

Those wishing to support Dedos’s charitable efforts may visit its Facebook page.

Students to wear mask, get temperature checked at school