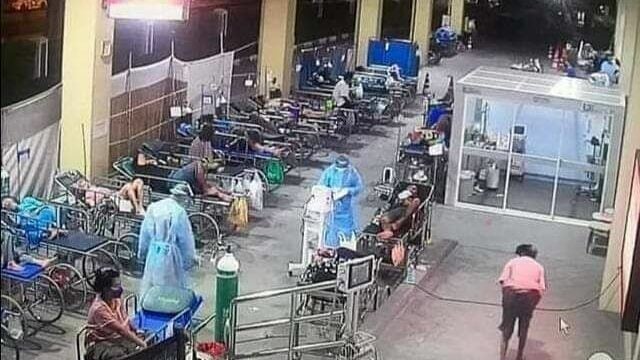 PHOTO: Dr Sandy has a story/Facebook

The Covid situation in Thailand? It’s in god/gods hands now, is the message a doctor posted to Facebook recently.

“Dr Sandy“, is a nom de plume for a doctor who posts to a Facebook page with over 5,500 followers. The doctor states they work at central Thailand’s Samut Skahon’s Ban Paew district hospital. “Dr sandy” posted an image of the hospital’s emergency ward that depicted a row of Covid patients waiting on stretchers for an empty hospital bed.

The anonymous doctor says that some of the patients had already died while waiting. Also, there is a ventilator shortage.

Dr Sandy writes that the deaths reported each day are dehumanising because they’re not just figures, “they are human beings,” she says. The doctor continues to say that some of the children have become orphans after Covid claimed the lives of their parents. But also, that the whole family is affected when they have 10 people living together and 10 people become infected.

The doctor also states that recently, a 4 month old Burmese baby was admitted to the hospital and tested negative for Covid when he was born, despite the mother testing positive. However, the mother and baby both now have Covid, albeit different variants.

Further, Dr Sandy says she is incessantly asked when will Covid end, which, according to the PM, is a month or less, but she says she doesn’t have a definitive answer. She adds that a TV fortune teller suggested that the situation might be improved by October, but she recommends praying to a god.

Recently, the Samut Sakhon governor, Veerasak Vichitsangsri, offered to resign if communication in his province does not improve.

Ubon2530
59 minutes ago, JamesE said: Maybe She's trying to tell us something. "Pray COVID away" sounds a little bit like 'Pray the gay away' - Perhaps this 'anonymous' man/woman is just a religious nut and their comments should be disregarded…
Malc-Thai
Yep the monks prayed covid away in Pattaya!  Better off throwing a monk into that fan that sprayed water into the air in Pattaya !
Aussieroaming
Yes Thailand...its time to put your hand up to tell the world media that you have a dire medical emergency on your hands and that Thailand urgently needs international medical help. Forget the fantasy about being an international medical hub and…