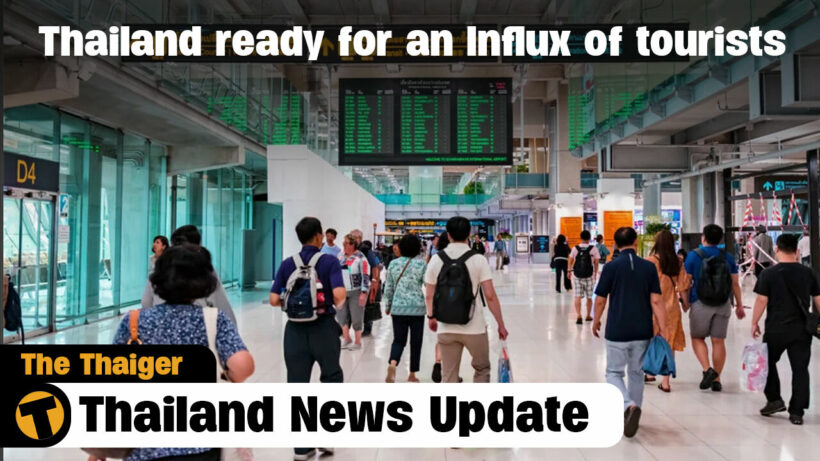 Thailand slid into 8th place in a survey of 1 thousand 500 Americans on the world’s safest travel destinations but is still in the world’s top 10. Canada snagged the winning spot during this survey in 1st place, followed by Iceland, Sweden, Japan, Ireland, Switzerland, South Korea, Thailand, New Zealand and Australia. Thai PM Prayut Chan-o-cha has welcomed the ranking, according to a deputy government spokeswoman. The spokeswoman said the PM sees the ranking as helpful in the wake of the recent changes and easing entry restrictions with the revised Thailand Pass. This news comes as travellers are finally flocking back to parts of Southeast Asia. In Thailand, the number of foreign visitors rose 38 percent in March from February, of course from a low base. The director of Chiang Mai airport said the airport is ready for an influx of international passengers now that the country’s entry requirements are eased.

The Phuket airport director predicted that throughout May, an average of 27 flights per day are expected to arrive at Phuket as confirmed by 21 airlines. The news comes as Thailand massively eased its entry requirements . No Covid-19 testing is required for vaccinated travellers (either before travel or on arrival), and unvaccinated travellers can either submit a negative PCR test result issued within 72 hours before travelling, or quarantine for 5 days in an Alternative Quarantine hotel. Phuket was the first to come up with a ‘quarantine-free’ re-entry procedure for Thailand last year the ‘Sandbox’ – on July 1. It eventually morphed into the much debate Thailand Pass, which still exists now, but in a much diluted form. Getting rid of any pre-travel or on arrival testing for fully vaccinated travellers is seen as a huge step towards fully re-opening Thailand’s battered tourist industry and its reputation as a haven for South East Asian tourism. Phuket officials have scrambled to find ways to revive its tourism economy. This year, they have organised 2 seafood festivals, and an event with hot air balloons at the Sarasin Bridge, linking Phuket to the mainland. These events were meant to generate income for the island’s farmers and vendors. With a tourist influx expected from this month, we’ll see what Phuket officials have in store next.

A Phuket driver, who was caught on film driving slowly and erratically braking, obstructing an ambulance that was taking a seriously injured woman to a hospital, has now presented himself to police. The driver presented himself at Phuket City Police Station during the weekend. He claims he didn’t hear the ambulance because he is “old and deaf”. So far police have only named the driver as ‘Mr. Thamrong’, and have confirmed he was driving a black BMW. Police have not confirmed Mr. Thamrong’s age, or why he didn’t notice the ambulance lights flashing behind him with the siren blaring. The police chief confirmed, however, that Mr. Thamrong was fined 500 baht, the maximum fine for obstructing an emergency vehicle. The chief said that if a person dies because of an ambulance obstruction, the obstruction driver can be charged with manslaughter, negligence causing death, or intentionally causing the death of another person. He added that the charge would depend on the driver’s behaviour.

Phuket Hotels Association, the nonprofit organisation of hoteliers focused on promoting a positive image of Phuket, is inviting members of the public to take part in its “Absolutely Fabulous Online Travel Sale” an online silent auction with great prizes that will fund scholarships for talented young people in Phuket. This forms part of the Phuket Hotels Association Benefit (PHAB) 2022 campaign, an important fundraising initiative which also includes “PHAB 4 Dance Fever”, a charity gala dinner at Angsana Laguna Phuket on Saturday, May 28, 2022. Bidding in the online auction is open until midnight on May 28, with prizes in dream destinations all around the world! Participants can bid for spectacular five-star stays and exciting experiences generously donated by sponsors in Dubai, Sydney and the Maldives, as well as Bangkok, Chiang Mai, Krabi and Koh Samui all potentially available with big discounts for the highest bidder. In addition to hotel stays, the auction includes a range of exhilarating activities such as yacht charters, golf, tennis, surfing classes and gym memberships.

One floor of a condominium in the Bang Sue district of Bangkok has collapsed between last night and this morning, killing a construction worker. Five other people were also injured when the floor came crashing down. It’s still unknown which floor in the 27 storey building collapsed, however, engineers and forensic investigators are inspecting the site today. The condo is located on the banks of the Chao Phraya river. Witnesses said they saw a pickup truck leaving the construction site around midnight carrying what they believed were 3 injured workers to Vachira Hospital nearby. Rescuers from the Poh Teck Tung Foundation said early this morning that they could not get into the building. This meant the rescuers were blocked from looking for anyone else who might have been trapped under the fallen concrete slabs, until they were given permission by construction inspectors.

This year’s May Day may not have been so fun for Beijing residents. The country’s ultra-strict so-called ‘zero-Covid’ policies mean buildings and housing complexes with Covid-19 cases are on lockdown. In Beijing, parks and tourist attractions are only allowing 50 percent of their normal capacity. All restaurants in the capital city are only serving customers take-out, with no dine-in services, from Sunday to Wednesday. Visitors to many office buildings and attractions like the Great Wall must show proof of a negative Covid test taken in the previous 48 hours. The city’s Universal Studios theme park said it had to be shut down temporarily. The transport ministry said last week, that in China overall, 100 million trips are expected to be taken from Saturday to Wednesday, 60 percent fewer than last year. Beijing started imposing lockdowns last week even though only 70 cases had been reported since April 20, out of the city’s population of over 21 million people. Beijing residents are now working from home, while stocking up on food and other supplies, fearful of being confined to their homes, as has happened in other cities, including China’s largest city, Shanghai.

Following a move by Indonesia’s government to ban crude palm oil or CPO from being exported from the country, 2 ships were caught trying to smuggle the product to India and the United Arab Emirates. There has been a palm oil shortage in Indonesia for the past month since the Russia-Ukraine crisis has impacted the supply of vegetable oil in the country, making palm oil more expensive. The price of CPO in Indonesia spiked from 0.96 to 1.03 US dollars per litre, to 1.52 US dollars per litre. Indonesian farmers have supported the CPO export ban, saying it’s necessary for supply and affordability of cooking oil in the domestic market. The Indonesian President has also weighed in saying that palm oil producers in Indonesia must first look after the local need before exporting. But the ban is now threatening food prices across the globe, and placing extra pressure on already steep cooking oil prices worldwide. Palm oil is only grown in the tropics, and is by far the most consumed and traded edible oil in the world. It is used to make detergents, margarine, soaps, chocolates, cakes, and cleaning products, among other things. It’s estimated that, when walking into a convenience store in Asia, almost 50% of the products would involve palm oil in their manufacture or are an actual ingredient. Illegally shipping cooking oil abroad is allegedly one of the reasons for Indonesia’s dramatic price hike. The ships recently caught smuggling CPO out of Indonesia were found in the Indonesian section of the Malacca Straits, and in west Kalimantan waters. The tanker in Malacca Strait waters was headed for India, and owned by a Russian national. The ship’s documentation was inconsistent with what it was carrying. The ship was also suspected of criminal offences for illegally carrying methanol cargo while not equipped with documents for transporting dangerous goods. The tanker in West Kalimantan waters was headed for the UAE, and had a Chinese captain with 24 crew members. It was transporting illegal 13,357,425 metric tonnes CPO and 98 drums of methanol.

A six-story building collapsed in China’s Hunan province on Friday, with 23 people inside. Rescuers managed to retrieve 5 people alive, who were brought to a hospital and are now in stable condition, according to authorities. But at least 18 more might still be trapped. The disaster happened in the city of Changsha. Meanwhile, the mayor of the city says the whereabouts of 39 other people who were around the building when it fell are “being further assessed”. China’s President Xi Jinping demanded that the victims be rescued “at all costs”, according to state-run news agency Xinhua. Investigators found that the building’s tenants had made structural changes to it, however, the cause of the collapse still has yet to be determined. The building had a hotel, apartments, and a movie theatre. This is already China’s second building collapse of the year. In January, an explosion caused by a suspected gas leak made a neighbourhood committee building collapse in the city of Chongqing. At least 16 people were killed. Gas leaks and explosions in China are said to be caused by weak safety standards, and corruption among officials tasked with enforcement. Some have also criticised the speed at which buildings are built in China. In 2015, a Chinese construction company called Broad Sustainable Building built a 57-storey skyscraper in just 19 working days. An investment manager, Alastair Campbell, told CNBC that the company did not finish the building fast to make a “quick buck”, but rather to “demonstrate an efficient building technique”.