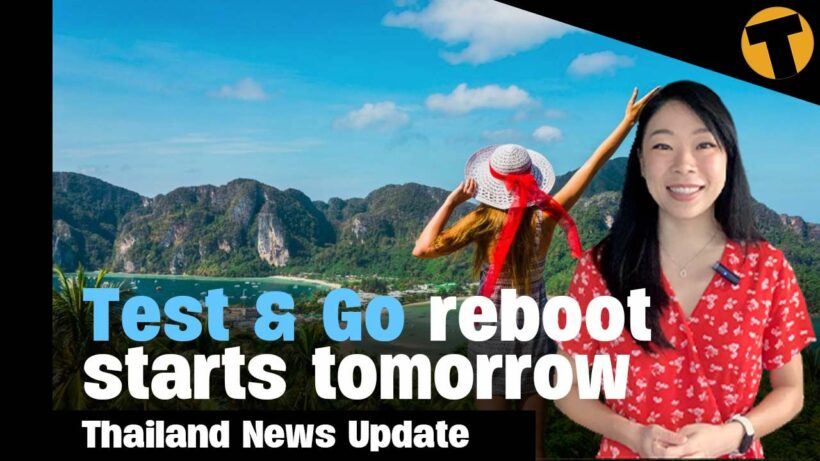 The Test & Go program of the Thailand Pass is set to start again tomorrow, a rebooted version with some additional costs and paperwork. Travellers will need to book an extra pre-paid SHA+ room and PCR test for Day 5 of their stay.

In the original version of Test & Go you only had the one test and pre-paid room booking on Day 1.The actual registrations for the revised Test & Go don’t start until tomorrow at 9am, Thai time. So the first arrivals under the revised program will follow in the days, or more probably weeks, after.

Arrival numbers to Thailand have been lukewarm since the introduction of the Test & Go program, allowing fully vaccinated visitors into Thailand with only 1 day of quarantine, waiting for the results of your arrival PCR test.

From November 1, when the first Test & Go program started, until now, there have been 381,871 international travellers arrive – 83% of those arrivals came in on the Test & Go program with the remainder in the Sandbox or Alternative Quarantine programs.

As a comparison, in the same 3 months 2 years ago, some 11.1 million travellers arrived at international airports in Thailand. So the recent 3 months of total international arrivals were only around 3.4% of the arrivals at the same time 2 years ago. Certainly work to be done!

Minister of Public Health Anutin Charnvirakul has raised diplomatic eyebrows by praising the way Thailand handled Covid-19 in comparison to the US over the past 2 years. He said that in the US, many were still unvaccinated and death tolls remain very high, while in Thailand people are following Covid-19 safety rules and bringing the numbers down.

He said that in the US, even though the Omicron variant now spreading everywhere in the world is a less severe, the lack of vaccination in the US continues to lead to more deaths. He commented that the lifestyle in the US is different to that of Thailand.

In Thailand, the death rate has hovered generally below 20 per day, with an average of 15 daily fatalities in 2022 for a population of 67 million people. Yesterday, in the US, there were 192,000 new infections and 1,127 Covid-related deaths.

He mentioned Thais willingness to wear masks, socially distance, wash their hands as well as get vaccinated as key factors to keeping Thailand relatively safe.He also commented that Covid-19 being declared endemic may be on the horizon, but said that it’s “not a change that will happen overnight”.

The long-anticipated Betong Airport is finally ready to launch in Thailand’s southernmost province of Yala, is expected to be up and running by next month. The first charter flight to Betong landed yesterday with 78 passengers hailing the beginning of the new gateway to the destination.

Businesspeople from the area were joined on the flight by an aide to PM Prayut Chan-o-cha, who lauded the event as the inaugural flight now that Thai aviation authorities gave Betong Airport its certification and licence to operated and allow flights to arrive and depart.

The charter flight just squeezed in at the end of January after PM Prayut had promised that Betong Airport would see its first flights landing this month. He has been following the construction of the airport which began with a 1.9 billion baht budget in 2016.

The airport’s original 2019 opening was delayed due to the Covid-19 pandemic.Betong Airport is expected to open travel routes to the Deep South from all over the country. Betong has been particularly difficult to access due to its mountainous geography with only small, winding roads connecting it.

After the horrific story about poachers killing 2 tigers in Kanchanaburi 2 weeks ago, the tables have turned as a local man barely survived an attack by 3 tigers that took the life of two of his dogs.

A Karen tribal man was out herding his 9 buffalos as they grazed in the Samathor forest inside Khao Laem National Park in Kanchanaburi when the tigers attacked.Thi incident took place Friday after the 46 year old man left his village around 9 am and travelled the 4 or 5 kilometres to the park to round up his buffalos.

The man was with his 3 dogs when at around noon he saw the 3 tigers barreling down on him. He fled as they attacked and managed to climb a tree as they continued mauling him. Two of his dogs weren’t as fortunate however and the tigers killed them.

When the tigers finally ran off, the Karen man climbed down from the tree and rode on one of his buffalos towards his home. He ran into a friend on the way and was helped to the village. The man is now being treated for about 20 wounds, with some of the injuries considered serious. Park authorities have helped with his recovery, giving his wife 10,000 baht to offset his expenses.

About 10 rangers went to check the area for the tigers in hopes of avoiding any more attacks. The forest has been cut off, with locals banned from entering without advance permission and a park ranger escort.

Just over the Thai southern border, in Ipoh, Malaysia, hundreds of houses have been damaged by a freak storm last night.Roof tiles were blown off while electricity poles were toppled in the incident that occurred at around 6.40pm.

Some residents had described the incident as being hit by a “tornado”.The Ipoh City Councillor has informed the local community that the main town hall has been opened for residents to seek shelter if they have nowhere to go.

No reports of deaths from the freak storm at this time.https://www.straitstimes.com/asia/se-asia/like-a-tornado-freak-storm-damages-many-homes-in-malaysias-ipoh

And with fears of the highly infectious Omicron variant continuing to spread around Asia, authorities are urging people against travelling over the Chinese New Year holidays to reunite with their families and celebrate the start of the Chinese Year of the Tiger.

Festive events, such as fairs and fireworks, have also been cancelled to prevent mass gatherings that could become hotbeds for infections, leaving those who gather to celebrate in muted fashion.

In China, where the Spring Festival is the most important festive season, authorities are scrambling to prevent any surge in infections that could jeopardise the Beijing Winter Olympics starting this Friday.

The show must go on: House to meet this week, despite 12 MPs having Covid-19