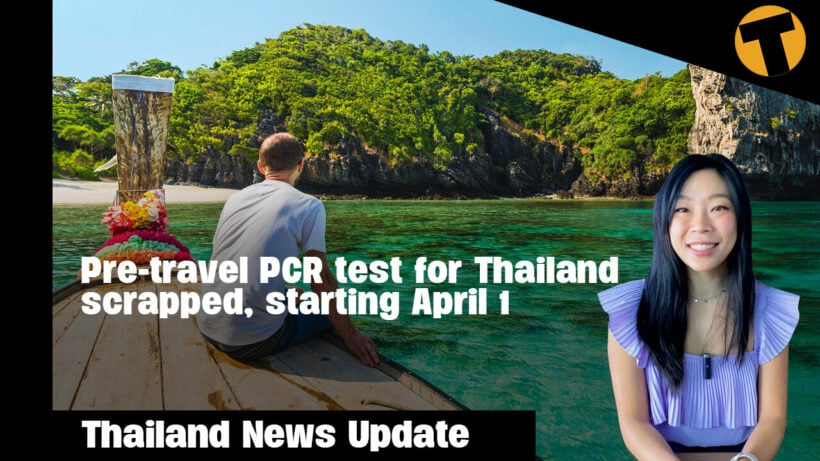 Starting today, travellers entering Thailand will no longer need to take a PCR Covid-19 test before their flight, but visitors will still need to take a PCR test once they land in Thailand. All travellers – vaccinated and unvaccinated – no longer need to take the pre-travel test, but requirements after entry vary depending on the program you come on… Test & Go, Sandbox or Alternative Quarantine for unvaccinated travellers.And there are still some airlines that will require a PCT or ATK before flying or other documentation, separate from the Thailand Pass paperwork. To make travel a bit more palatable and entice more people to visit Thailand, the government’s Covid task force decided to scrap the requirement for a pre-travel test taken within 72 hours before heading to Thailand. The revised entry requirements were published in the Royal Gazette on Wednesday, making the new rules official. For those who are fully vaccinated and entering under the Test & Go program, an SHA+ hotel must be booked for their first night in Thailand while they wait for the test results to come back, which can take up to a day. On the fifth day of their stay, travellers will need to take a self-administered rapid antigen test and report the results on the Mor Prom app. Unvaccinated travellers, or those who don’t meet Thailand’s vaccine requirements, must isolate at an approved SHA+ hotel or resort for five days under the Alternative Quarantine scheme and undergo Covid-19 testing before they are released. Before flying to Thailand, travellers must apply for a Thailand Pass QR code through the official website run by the Department of Consular Affairs. The link is on our website in Thailand Pass stories. The registration is free and beware of websites claiming you need to pay for it… you don’t.

AIS, or Advanced Info Service, Thailand’s biggest mobile operator, has written to the NBTC expressing opposition to the planned merger of its rivals True and DTAC. AIS apparently submitted the letter on March 25, urging the NBTC board to handle the deal carefully, where it claimed the merger would affect consumer interests and competition.AIS also reminded the NBTC board that it has the legal authority to consider the merger deal and stop it if they deemed it inappropriate for the consumers.The letter was signed by Saran Phaloprakarn, AIS’s head of business development. It is the first public response by AIS to the massive merger in Thailand’s telecom industry. The planned merger was announced in November last year as a plan to create a new tech company which would then move into advanced tech, such as artificial intelligence, the internet cloud, the soo-called Internet of Things and even space technology.But the deal has drawn plenty of criticism from academics and consumer advocates who say the move will lead to market domination and reduce competition, with customers paying the price.

Police have caught the man who allegedly made nine bombs and left them strewn across a main road in Rayong on Tuesday night. One of the bombs exploded and the other eight were defused by Rayong police on Wednesday. The police used CCTV to figure out the criminal behind the operation, who said he used YouTube to learn how to make the bombs. Yesterday, an 18 year old man was detained and has allegedly confessed to making nine homemade bombs and to leaving them strewn across the four-lane Choeng Noen – Chakok road in Rayong province on Wednesday night.A local man heard an explosion around midnight on Wednesday and found eight more homemade bombs lying in the road when he went out to look. Rayong’s Explosive Ordnance Disposal team removed the bombs and defused them. The man put his nine homemade bombs in his backpack and drove on his Honda motorcycle to the scene of the incident. When he got there, he threw a bomb that exploded and tried to make a quick escape, dropping the eight other bombs in the process. The man is facing two charges: possession of explosives and causing an explosion that is dangerous to others.

A man was arrested at Don Mueang International Airport in Bangkok while he was allegedly about to bring illicit drugs onboard a plane. He confessed that he tried to bring drugs from Bangkok to sell in Hat Yai, in the southern province of Songkla.The 31 year old alleged drug dealer was arrested with various drugs, including 207 grams of methamphetamine, 102 grams of ketamine, 11 grams of cocaine, and 6 packs of powdered methamphetamine which is mixed with liquid to make stuff called ”happy water.”Police say he hid the drugs in his jeans pocket and some of them in his underwear.At first, he told officers that he had bought the drugs for himself. Reports say the officer didn’t believe him and continued asking questions until he confessed that he was hired at 70,000 baht to buy drugs from Bangkok to sell in the Hat Yai district.He said that the employer brought the drugs online via Facebook and asked him to pick them up. The suspect was charged with trafficking of illicit drugs.

A woman who had been suffering from pain in her breast has found out gauze fabric had been left inside her body from a breast augmentation a decade ago. She sought help from a celebrity lawyer who is now calling for the beauty clinic to take responsibility for the women’s suffering. The lawyer, Sittha Beerbangkird, shared the case on his official Facebook page to warn people to be careful when attending any surgeries. The woman told her lawyer that she had breast augmentation surgery 10 years ago. She recently went to a doctor reporting pain in one of her breasts. She underwent another surgery and doctors found a gauze that had been left inside her for over a decade. The clinic, at this stage, is named.

The date has been set for Liverpool football club’s pre-season friendly with their rivals Manchester United at the Rajamangala Stadium in Bangkok for Thailand’s mad crazy premier league football fans.The two English Premier League giants will go head to head for the Bangkok Century Cup on July 12. Liverpool will travel to Thailand for the first time since 2015 to kick off their first pre-season tour since the start of the pandemic. The 2022/23 Premier League season will begin about three weeks later. The long-awaited match can go ahead as planned since Thailand eased entry requirements for fully vaccinated travellers who can now enter the country without quarantine. Tickets go on sale today from 9am and can be purchased through the Thai Ticket Major website. Ticket prices range from 5,000 baht to 25,000 baht. Each fan can buy up to four tickets each. Both clubs have a huge following in Thailand and there is no doubt the stadium will be packed out with fans.

CanadaSam
This article makes no sense! The headline says that "PCR tests upon entering Thailand scrapped". And then it goes on to describe how all vaccinated tourists have to spend their first night in a hotel, waiting for the test results…