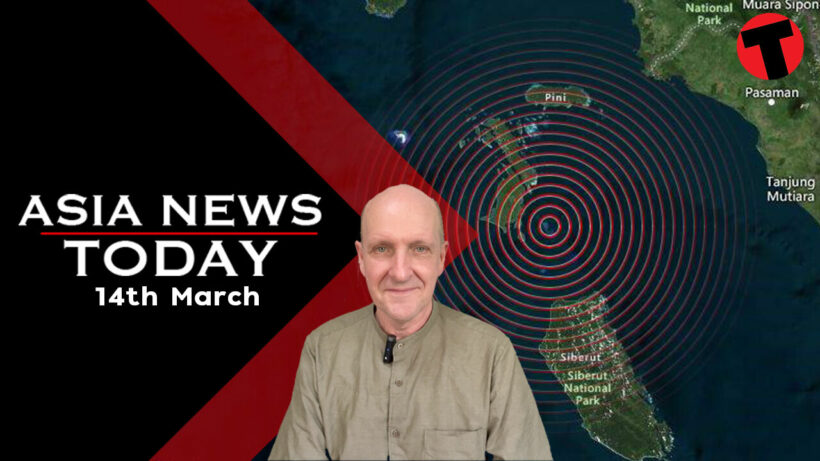 Families of Japanese citizens abducted by North Korea are calling on an early meeting of leaders from the two countries to retrieve their relatives. They are pushing on the Japanese government to approach North Korean leader Kim Jong Un to swiftly resolve the issue of abductions… this comes from the Association of Families of Victims Kidnapped by North Korea.The association is also calling on cooperation from the US to help co-ordinate the meeting. Yokota, the brother of Japanese abductee Megumi, say that Japanese PM Fumio Kishida “should strongly send a message that if the issue is resolved, both Japan and North Korea will be able to paint a brighter future”.

A strong and shallow underwater earthquake has shaken the western regions of Indonesia this morning but no serious damage has been reported so far and no tsunami warnings were issued. The magnitude 6.6 quake was centred at a depth of 16 kilometres about 170 kilometres west of Pariaman, a central town in West Sumatra province facing the Indian Ocean. The quake was felt in many parts of the immediate area but authorities say there was no danger of a tsunami. Indonesia is frequently hit by earthquakes and volcanic eruptions. A 6.2 earthquake hit West Sumatra last month, killing at least 16 people and injuring more than 400.

Flights between Bali and Australia are back after a 2 year break as the first plane load of Australians headed to Indonesia today. The first Jetstar flight, the budget offshoot from QANTAS, headed to Bali from Melbourne’s Tullamarine airport with more than 300 passengers. This is the first time Australians have flown to Bali since Australian airlines were grounded in March 2020 as an initial Covid precaution. The re-commencement of flights from Australia to Bali follow the Indonesian government relaxed quarantine rules for visitors arriving from approved countries, which includes Australia. The rule change means tourists from the 23 approved countries only need to pay the equivalent of US$47 for their visa, rather than US$300. Passengers can pay for their visa at the airport, but still have to undergo a PCR test when they arrive in Bali. And now for the fine-print, travellers will have to take out insurance that would cover them for up to US$100,000 if they catch the virus and require hospitalisation or treatment. Tourism accounts for a massive 52 per cent of Bali’s GDP.

South Korea believes North Korea might be ready to test an intercontinental ballistic missile as soon as today. This has come from a source in the South Korean presidential office. Pyongyang appears to be following through on its threats to restart testing ICBMs, breaking a self-imposed moratorium nearly 5 years ago. Outgoing President Moon Jae-in’s office has briefed the new President-elect that a test launch is imminent and even as soon as today. The comment was made as President Moon’s national security advisor briefed President-elect Yoon about various foreign policy and security issues over the weekend. In a rare joint announcement, both the US and South Korea announced last Friday that the North used its largest ever ballistic missiles in the last two launches, whilst North Korea insisted the launches were part of satellite launch preparations. The new President Yoon, elected just last Thursday, has signalled a tougher line against Pyongyang. He even went as far to say said pre-emptive strikes might be needed to counter an imminent North Korean missile attack, during the campaign leading up to last week’s vote. He’s since declined to repeat the threats since being elected.

China has placed about 17 million residents under lockdown again, as Covid infections doubled across the country to nearly 3,400 and officials worry about the resilience of China’s ‘zero-Covid’ strategy in the face of the worst outbreak in two years. The sprawling southern Special Economic Zone of Shenzhen, which sits directly to the north of Hong Kong, is home to about 13 million people. All residents are now being told to remain at home as officials struggle to eradicate the Omicron-fuelled flare-up… which has been linked to the virus-ravaged city of Hong Kong to its south. The lockdown has been matched by a suspension of public transport and will last until at least March 20. The nationwide surge has also closed schools in Shanghai, China’s largest city. There’s also been lockdowns in China’s northeastern cities, as almost 18 provinces battle clusters of Omicron and Delta variants of the coronavirus.China, where the virus was first detected in December 2019, has maintained a strict “zero-COVID” policy, enforced by strict and draconian lockdowns, travel restrictions and mass testing to battle any outbreaks.

Malaysian PM Ismail Sabri’s Malay party has defeated coalition partners and the opposition parties to score a landslide victory in a second Malaysian state election that could be an indicator for an early national poll. Saturday’s election and win in the southern Johor state by the United Malays National Organization, better know as UMNO, reflects wins in another state election held last November. Although the next general election isn’t due until July 2023, the two big wins will embolden members of UNMO to push for an early poll. The UMNO-led National Front coalition oversaw growth in Malaysia for 61 years until its landslide defeat in 2018 due to the multibillion-dollar 1MDB financial scandal. But the coalition that won the 2018 poll collapsed two year later due to defections. UMNO and the National Front then made a comeback..Political pundits say that both a low voter turnout and a highly divided opposition secured UMNO’s wins.

There have been several changes to Singapore’s Vaccinated Travel Pass and the Vaccinated Travel Lanes, for arriving after March 15… well, that’s tomorrow direct from their website… Travellers entering Singapore from March 15 will only need to undergo an unsupervised self-administered Rapid Antigen Test using self-procured authorised ART kits within 24 hours of arrival in Singapore.This will replace the previous requirement for a supervised self-administered ART.Travellers are required to report their test result via the website… sync.gov.sg before proceeding with their activities in Singapore. Visitors no longer need to visit these testing centres and do supervised tests. Instead, you can now do it at your leisure at a hotel and report the results.Singapore also clarifies the countries at which the eligible travellers must have been in the preceding 7 days to be allowed to enter. You need to check if you’re from one of those countries if you’re heading to Singapore.Meanwhile, the total number of daily Covid infections has dipped below the 10,000 mark for the first time since February 14, with 9,701 infections reported yesterday. It peaked with 22,032 infections on February 22.

Deaths due to Covid-19 pandemic much higher than reported figures, study shows