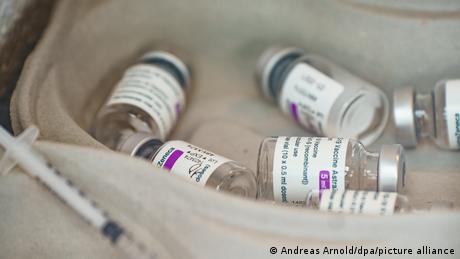 Even as Germany allows people from the UK, India, Nepal, Portugal and Russia to enter the country without restriction, Health Minister Jens Spahn said it is unlikely that coronavirus restrictions will be lifted soon.

On public broadcaster Deutschlandfunk radio, Spahn noted that everything depends on the vaccination rate. Nearly 90% of the elderly will soon be vaccinated. However, he noted, those under 60 still require some persuading to reach an 85% vaccination rate.

“If we can do that as well as possible in July, then we also have a good prospect of an autumn, of a winter with fewer requirements and significantly fewer restrictions,” Spahn said.

Here is a rundown of other coronavirus news from around the world:

In the United States, the Denver Zoo will begin vaccinating some of its animals for COVID-19 as early as next week with primates and carnivores first on the list to get a jab.

The veterinary vaccine, which is formulated primarily for mammals, is being developed separately from those for human use.

Transmission is rare between humans and other species, but there have been several documented cases of COVID-19 in large cats, monkeys and certain rodent populations.

Japan‘s government is considering banning spectators from all events at this month’s Olympics, the Mainichi newspaper reported on Wednesday.

The paper said officials are concerned about the spread of the coronavirus.

Organizers have already banned overseas spectators and set a cap on domestic spectators at 50% of capacity, up to 10,000 people, to contain a lingering outbreak of infections.

The Mainichi, citing sources within the government, said stopping even local fans from attending was considered the least risky option.

New Zealand medical regulators have approved the use of the Johnson & Johnson coronavirus vaccine and the country is ready to buy 2 million doses. Earlier in the year, New Zealand approved the BioNTech-Pfizer vaccine. The country, which has been praised for its handling of the pandemic, will mainly use the German-developed jab to vaccinate the population of 5 million.