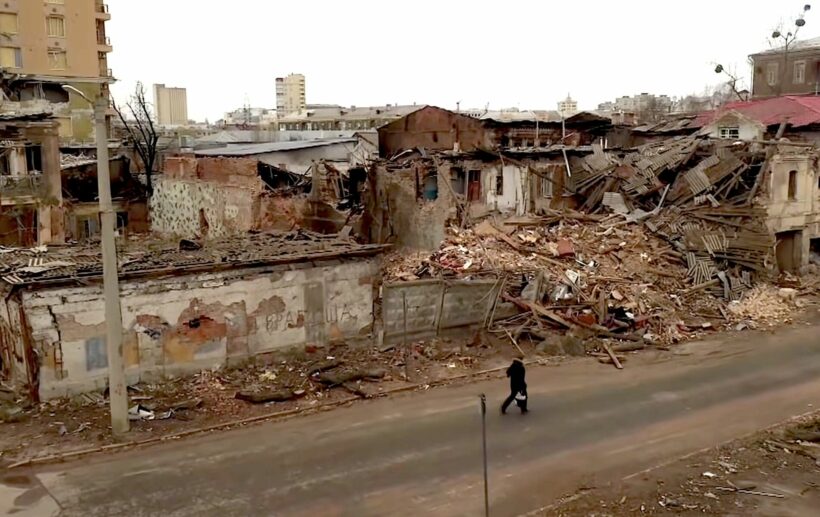 Drone footage shows a man walking along a road in the city of Kharkiv in northeastern Ukraine where fighting continues. Credit: SkyNews | YouTube

As the Russian invasion of Ukraine continues into its second month, here’s the latest deadlines…

• With Russian and Ukrainian forces at a military stalemate in Ukraine, the door has opened for a diplomatic resolution to end the war.

• At Tuesday’s peace talks in Istanbul, Ukrainian negotiators offered a pledge of neutrality and no NATO membership, in exchange for a framework that would allow eight other countries to act as security guarantors, including Poland, Turkey and Israel. The guarantees would be legally binding and allow those countries to intervene if Ukraine is ever attacked in the future.

• The Ukrainian delegation also stressed that any arrangement would need to be supported by the Ukrainian people in a referendum. They warned that no treaty can be signed and no referendum held while Russian troops are still in Ukraine. Also, the delegation’s head insisted that the embattled Donbass region in eastern Ukraine will remain a part of the country, saying…

“The position of Ukraine does not change. We recognise the international borders of Ukraine as of 1991. There are no compromises or red lines here.”

• Ukrainian delegates further suggested these questions will be addressed at a higher level, when the presidents of both countries eventually sit down in face to face talks.

• In reply to the Ukrainian concessions, the Russian delegation announced they would significantly scale back their military activity near Kyiv, in order to increase trust and “create an atmosphere of peace.” They also expressed optimism that the two presidents might be able to meet in person and a peace treaty could be achieved.

• However, President Volodymyr Zelensky said he’ll believe it when he sees it — when Russia shows concrete results in pulling back its forces from Kyiv and Chernihiv. Meanwhile, the Russian assault continued, with air raid sirens sounding in Kyiv early Wednesday morning, just hours after Russia said it would withdraw troops from near the capital.

• Both Ukrainian and US officials have confirmed that Russia is continuing to reposition forces near Kyiv to other areas, probably to refocus primarily on eastern regions.

• Likewise, US President Joe Biden expressed skepticism, saying “let’s see” what happens with the Russian forces in Ukraine. Similarly, the UK has said that the world will judge Russia by its actions, not its words.

• Amnesty International has accused Russia of committing war crimes in Ukraine, including attacks on hospitals and apartment buildings, as well as the use of dangerous, non-precisions weapons such as cluster bombs. So far, the war has uprooted some 6 million people from their homes in Ukraine, while more than 4 million people have fled to neighbouring countries.

Smithydog
Enough The sheer lack of sensitivity being shown by some members towards people who have died, just to support alternating claims of responsibility in a war situation, is obnoxious, sickening and beneath what is considered to be any form of…